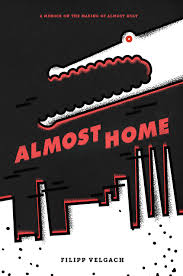 Almost Home is the memoir of Filipp Velgach, an American of Ukrainian heritage. He was recruited to translate in the Ukraine for a group of documentary filmmakers in 2013, at the time of major unrest and protests revolving around then-president Yanukovych and Ukraine’s relationship with Russia. These are complicated politics, and even while following the news, I found it difficult to always understand exactly what was going on. One of this book’s strongest points is how Velgach explains the protests, their political and cultural background, and their effects. He has a matter-of-fact tone and clear, easy to follow narration. He’s also thorough in exploring important geopolitical  connections relevant to the region and major events of the war. “Russia was losing its collective mind,” he writes, and considering headlines of recent years, I had to smile.

But back to the story of the documentary, Almost Holy. It follows a vigilante priest, Gennadiy Mokhnenko, who’s made it his mission to tackle the problem of child drug use and homelessness in Ukraine (a difficult topic to read and learn about, no doubt, but equally strongly one that we shouldn’t try to look away from.) He runs a rehabilitation center in the city of Mariupol that helps kids off of drugs and the streets. While he’s at it, he fights against the dealers exploiting children’s addictions in this post-Soviet economically ravaged city (hilariously described as the Baltimore of the Ukraine). He’s an incredibly dynamic, if complicated, character.

On a personal note, I loved one passage about Gennadiy’s argument that prayer is never enough, action is also required to make change. At a time when every global or personal tragedy triggers an outpouring of offerings and requests for prayers, this was refreshing and exciting. More of that, please. Reading about his passion and works made me really want to see this film. (As a side note, the trailer looks hauntingly awesome and it premiered at the Tribeca Film Festival and garnered a ton of accolades; seems like a good one.)

Filipp is at one of those quarter life crisis times, teaching but seeming unsatisfied, considering a PhD, curious to learn more about the country his family left behind, and why they did that while still holding on to so much of its culture. He goes to Ukraine against his parents’ wishes, especially his father’s, who is near furious that his son would want to return to a country that they risked a lot to flee when he was a child. But Filipp is very interested in his family’s identity, and how that fits into his identity as an American, among other Americans both with and without recent immigrant backgrounds. I find these topics and issues completely fascinating, and they were written about beautifully here – with a light sense of humor and a relatable tone.

My issue is that the book is a little short for all of the things that it wanted to be – just as I have to skip between topics for a review, the book itself skips between topics very often. All of them were related and important and fascinating, but it seemed for the sake of making a readable narrative, certain issues were skimmed over or not examined as deeply as they could’ve been to produce a really satisfying story. It felt unresolved at the end, despite this massive journey, the soul-searching the author had done, and what he’d learned about his family history and some deep, dark secrets.

There just seemed like so much more to be said, including how his experiences working on this gut-wrenching documentary affected his own choices. He often compares his life to those of the children who ended up addicted to narcotics and living on the streets, wondering how he would’ve turned out if his family hadn’t emigrated when they did. That’s a very valid question, and I would’ve liked to know more about how his recognition of his privilege shaped him. But all of this is still very fresh, considerably, so maybe it’s still in process. Based on the quality of his writing and his knack for telling engaging, funny, emotionally compelling stories, I can’t wait to see what he writes in the future.

One last beautiful theme running throughout the narrative is that of the Soviet cartoon Cheburashka, and its character Crocodile Gena, who’s likened to the documentary subject Gennadiy. It ties in with the rich sense of nostalgia and melancholy that accompanies so much Russian and Soviet literature, including modern ones like this, of children who have grown up in another world and slip into their parents’ and grandparents’ pasts. This nostalgia is usually judged as misplaced, including here, and Velgach and his family give plenty of reasons why. But I loved the inclusion of references to this cartoon, and I dare anyone to not be moved by some of its all-too-adult melancholy of the everyday, even when it’s trying to teach optimism.

Velgach fittingly closes this moving memoir with lines from one of Crocodile Gena’s songs, Blue Wagon, so I’ll close with the same.

Almost Home: A Memoir of the Making of Almost Holy
by Filipp Velgach
published September 20, 2016 by Animal Media Group