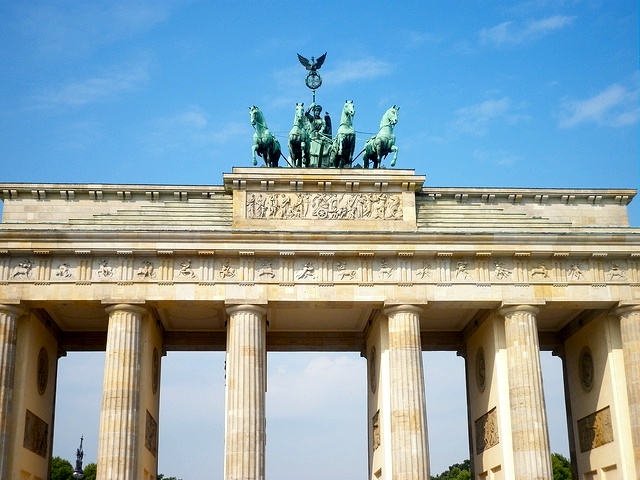 The Brandenburg Gate (Brandenburger Tor) stands on Pariser Platz in Berlin, a symbol of German unity that for decades was enclosed in Communist East Berlin, and the scene and symbolism for important moments in Nina Willner’s Forty Autumns. Photo by Rennie Sweeney, August 2010.

This work is licensed under a Creative Commons Attribution-NonCommercial-NoDerivatives 4.0 International License.

Nina Willner’s Forty Autumns is a remarkable achievement. Blending personal memoir, contemporary history,  and beautifully readable narrative nonfiction, she has chronicled the lives of several generations of her family as they live in East and West Germany and America. The book begins at the end of the Second World War, with Germany being divided, and she tells the stories of how that affected her family, most of whom remained trapped in the East, but one lucky daughter, her mother, eventually managed an escape to a very different life in the West.

The family serves as a microcosm of what took place in divided Germany as it formed and progressed through the Cold War. Told alongside their personal history is the greater historical story, providing the bigger context for what was happening to determine the course of these lives. They lived through and were very directly affected by some of the most momentous world events of the second half of the 20th century, and the book gives a perfect juxtaposition between the personal and the public. Not that the public events are impersonal or hard to connect with by themselves. But the deeply personal and emotionally recounted stories of the family’s lives and their triumphs, disappointments, and heartbreaks, which they can’t even fully share with their separated loved ones, are driven home so powerfully in this book.

It’s jarring to feel so strongly their pain and heartbreak as they’re separated from each other, often not even able to communicate by letter and almost never by phone, with only a couple of in-person visits allowed by the East German government in exchange for promises of spying or conversion. And then to consider that this is just one family, and the rest of the country was similarly separated and affected.

I loved that there’s such a strong focus on the fortitude and ability of the women in this family. She highlights the struggles and strengths of these very determined women so effectively. Willner herself was a rare female American Army Intelligence Officer, and the first to lead intelligence operations in East Berlin. Her mother, Hanna, the oldest of eight children, is the only sibling able to escape East Germany, eventually marrying and settling near Washington, D.C. and raising Nina and her siblings. Nina is later stationed in Berlin in her army capacity, experiencing firsthand the stark national division and the fear and oppression that her mother ran away from decades before. At the same time, the longing is so palpable, for the unknown and wondered about or painfully remembered family separated by a wall and a misguided ideology.

In addition to having an amazing generational story to tell, Willner is a fantastic writer. She writes in a novelist’s rich, descriptive voice in the segments about her family, but so naturally. I’m not a big fiction reader anymore, but this reads like excellent fiction. On the other hand, she writes a very readable account of the major historical milestones of the Cold War and actions and decisions of the Soviet Union and East German Communist governments. I’ve read a lot on the topic but this was by the far the most accessible without having a talking-down or textbook tone. I learned so much and was impressed by her writing throughout.

Forty Autumns:
A Family’s Story of Courage and Survival on Both Sides of the Berlin Wall
by Nina Willner
published October 4, 2016 by William Morrow

I received an advance ebook copy courtesy of the publisher for review.

2 thoughts on “Generations of Germany”