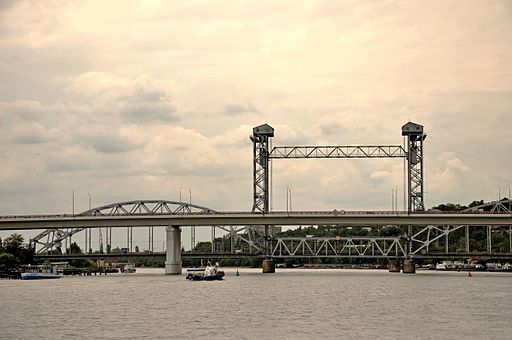 Bridge across the River Don in Rostov-on-Don, Russia; one of many cities that were the scenes of the grisly crimes of Soviet serial killer Andrei Chikatilo, also known as the Rostov Ripper or the Red Ripper. Photo credit: Zhanett.b, Wikimedia Commons.

Book review: The Red Ripper: Inside the Mind of Russia’s Most Brutal Serial Killer, by Peter Conradi (Amazon / Book Depository)

A few years ago I watched a documentary about Andrei Chikatilo, the most famous Soviet serial killer. I’m not sure why, because I remember it being stomach-turning. Initially I’d heard of him after reading the popular thriller Child 44, which has a plot line inspired by his notorious crimes. What I learned from the novel was that part of the difficulty in catching the killer was that the Soviet Union denied the possibility of a serial killer’s existence, and so missed the opportunity to link many of the obviously-related murders.

Chikatilo’s crimes, many against children and adolescents, are incredibly disturbing. What’s interesting about this story is the connection to the Soviet culture of the time (late 1970s-1990) and how the Communist government and police investigators dropped the ball so many times, in so many ways, on this investigation. There shouldn’t have been any possibility for this man to kill 50+ people, especially because he wasn’t entirely unknown to police, especially at the beginning of his serial killing career. He was even let go from his teaching work for creeping out and trying to molest the children, and around the same time happened to be in the vicinity of child murders. He was arrested too, and let go. But with a lot of factors at play, like his job’s travel requirement, the vastness of the territory including very secluded areas, Soviet indoctrination and prevailing culture, lack of initial publicity about the murders, and the aforementioned inability to accept a serial killer, he was able to get away with being very prolific and very disgusting.

The highlight of the writing is this weaving in of the culture and happenings in the Soviet state that contributed to both the murders playing out as they did and to the murderer’s own unhinged mentality. I really liked reading about that, and that’s what I remember made me even watch something about this previously. Reading the gory details of even a handful of the murders is really hard, however. They’re ghastly. I had to take a break and I wasn’t sure I could finish even though I already knew some of this from seeing the documentary. Still, it’s well-researched and written. I hesitate to call it a true crime guilty pleasure, but I’m not sure what other category it falls under. Definitely should appeal to those interested in Soviet history as the whole ordeal was a byproduct of this broken system, as well as to anyone interested in the real story behind this plot line from Child 44. Truth is definitely stranger than fiction in this case.

I received an advance copy of the new ebook edition courtesy of the publisher in exchange for review.