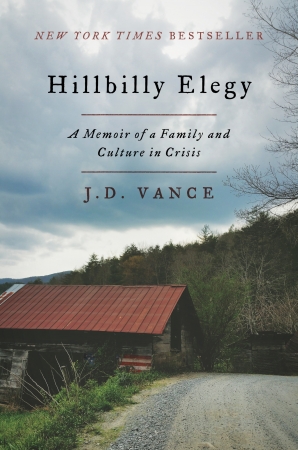 Hillbilly Elegy is the memoir of a still-young man looking back at his childhood and his family’s migration from impoverished, seemingly hopeless Kentucky to a moderately more hopeful Ohio. But like the old Russian adage that if you try to drink your troubles away, they learn to swim, it follows here that if you escape southern Appalachia, it…hitches a ride on the northbound interstate and shows up at the door of your still-broken home? Something like that.

But J.D. Vance was lucky, because his family was never entirely broken, like many are. The CBS documentary, “A Hidden America: Children of the Mountains” captivated Americans because it shined a light into those dark coal mines, the garbage-strewn yards along rarely traveled roads, and into the fractured homes and families of poverty-stricken Appalachia. The documentary was led by Diane Sawyer, a shining accent-free native daughter example of what can be achieved by those who escape. She introduced us to the horrors of Mountain Dew mouth, Oxycontin addiction and an Indian doctor explaining that his work in Appalachia is with a more impoverished population than he saw back home in India.

And yet in this election cycle and recent others, we’ve seen this area become more and more entrenched in their not working out so well ways, rejecting liberalism and the possibility of expanded social programs to catch those who fall through the cracks in favor of conservative principles that don’t include, or even really consider, them. Why? Vance has an insider’s perspective, and like Diane Sawyer, he’s able to shed some light on the old belief system that’s at work here. He doesn’t explain everything, I was left still with frustration and confusion, but there’s a lot to be learned from his deft analysis.

I loved his storytelling voice, the maturity and understanding with which he considers his flawed but loving childhood, even though he admits he’s writing the memoir at age 31, pretty young for this sort of reflection. That made me respect him and his observations all the more, because they sounded as measured and considered as if they’d come with ages more wisdom behind them. He was forced to grow up faster than many kids, which seems another common element of the region. His grandparents were the highlight of the book for me, in how much they cared for him and provided him. I liked that he presented them with all their flaws, revealing that they were trying to make good the second time around, after some missteps raising their own children.

I started to disconnect at the last quarter, when he describes his experience at Yale Law School. I understand the fish out of water component, but it seemed a little overplayed when all he needed to adapt was to figure out what networking was and how to use an excess of silverware at said networking dinners. Manageable. And his difficulties in determining where to clerk for a judge. Didn’t quite fit with the down-to-earthness I felt in the rest of the book.

But this portion of the book aside, I found it an incredibly touching, all-too-real story. I appreciated his sociocultural analysis using much of his family’s background or his understanding of the people he grew up around as illustrative examples. Vance has made the rounds on NPR and the like, discussing his life and why the people of the region where he grew up repeat the cycle of poverty, abuses of various kinds, and the relationship of the region to the rest of America. I was more than a bit surprised to learn he’s a Republican, because he espouses plenty of more liberal-leaning views throughout the book. I found that out about halfway through reading, and it did color my opinion somewhat. I’m sorry to say that, but it’s true. I’m intrigued enough to track down some more of his interviews and try to learn a little bit about his specific beliefs, though.

Recommended, if not required, reading for every American, period.

Hillbilly Elegy: A Memoir of a Family and Culture in Crisis
by J.D. Vance
published June 28, 2016 by Harper

14 thoughts on “Appalachia and the American Dream”