In the early morning hours of May 1, 2010, Shannan Gilbert, who was working as an escort, took off running into the dark marshland of Oak Beach, a private residential community in Suffolk County, Long Island where she’d had a professional date. Her disappearance was the catalyst for the discovery of what would turn out to be ten murder victims. Some were scattered and others meticulously placed along Ocean Parkway, a remote stretch of highway running along Gilgo Beach and the south shore of Long Island. The remains, some of which are still unidentified, are believed to be of sex workers who disappeared between 1996 and 2010.

From December 11-13 2010, while searching for Shannan, Suffolk County police and investigators uncovered skeletal remains of four young women who’d disappeared from the New York area between 2007 and 2010, the most recent only three months prior. Wrapped in burlap, they were placed about 500 feet apart. All had advertised their services on Craigslist and Backpage; none were Shannan. As months passed and the search widened, the partial remains of six more victims were found further along the Long Island coast. Among them was an Asian male (the only male found) dressed in women’s clothing and beaten to death; and a mother and toddler wearing gold jewelry.

Thickening the plot, some were dismembered, and other parts of their bodies had already been discovered washed up on Fire Island or tossed like garbage into the Pine Barrens of Manorville, a spooky town 45 miles east of the beaches, itself plagued by a strange connection to violent crime: the scene of numerous gruesome murders.

Add alleged police misconduct and deep-seated corruption, initial lack of interest in missing prostitutes and a stunning lack of transparency from law enforcement, repeated blocking of the FBI’s offer to assist, weird Oak Beach locals with fishy, changing stories, threatening phone calls from the killer to one victim’s sister, plus the discovery of Shannan’s body deep in a reedy marsh behind an Oak Beach house, with some of her possessions seemingly tossed in after her, and this case is understandably haunting and unforgettable. Shannan’s death is officially ruled an accidental drowning (never mind that she was found on her back, unusual for drowning victims). Suffolk County’s opinion is that one killer is responsible for both the victims in burlap on Gilgo Beach and all others, but many vehemently disagree.

Yet with so many victims, clues and potential evidence, it seems that every time something new surfaces, instead of being the key to unlock the case, it confounds it more. The six year anniversary of the first discoveries on Gilgo Beach is approaching, and as far as the public knows, we’re no closer to answers. Instead, the case has provided fertile ground for theories on forums like Websleuths and Reddit, and I have to warn you – if you’re at all interested be careful here, because getting into these theories is falling down the proverbial rabbit hole.

This story has haunted me since it broke. I lived in New York then and it was scarily close to home, never mind that it had nothing to do with me. I thought about it endlessly. It came at a point when I avoided true crime or anything that scared me, mostly because I lived alone in a basement apartment in Queens and it wasn’t helpful to watch or read anything that would keep me awake at night in an environment that my imagination could easily run wild in. (In other words, I’m a complete wimp for creepy, scary stuff.) I anxiously waited to get a copy of New York magazine journalist Robert Kolker’s 2013 book on the case, Lost Girls.

I’m not a big re-reader of books, I could count on both hands how often I’ve reread one that wasn’t for college (hello, Frankenstein and Remains of the Day). But I’ve read this 2-3 times, paged through it countless times more, and I always find something I didn’t notice before. Kolker is an exquisite writer, and he cares deeply about giving voice, history, and some sense of understanding and compassion to women whose lives were viciously taken, not capitalizing on the sensationalism and obsession this case has inspired. I think many readers were unsatisfied because of its heavy focus on the victims, their troubled families, and choices leading up to their deaths at the expense of more police procedural narrative.

But as I mentioned, official police information is far from abundant here. Kolker does an excellent job of analysis with what’s available, and sadly, in the 3+ since its publication, frustratingly little is available to add. I was unsatisfied too, it feels exhausting to become so invested in the stories only to come out on the other side with…nothing. We can pore through forum threads all day, this mystery only gets deeper and no answer comes.

Kolker was interviewed for the recent TV series, and again demonstrated the curiosity and pointed analysis that guides readers of Lost Girls through the case. In the book, I was struck over and over by his humanity and sensitivity, by what extensive portraits he paints of these women. They haven’t been done much justice in the traditional sense – their killer remains free, and according to a profiler on The Killing Season, most likely still active and hunting. But Kolker does them an incredible, deserving justice in his book.

I wrote a much longer review when I first read it but later deleted it. I was so convinced upon finishing (not through any pushing by Kolker, he endorses no theories) that the person responsible was the john whose home Shannan fled. This seemed like Occam’s razor to me – what are the odds of an online-based prostitute who perfectly matches the profile of victims found within yards of her body, running screaming from his house, making a frantic 20-minute 911 call reporting “They’re trying to kill me”? We don’t even know with certainty who else was with him, and as Kolker demonstrates in his bizarre interview attempt with the man, he’s tight-lipped and clings to his police clearance, hardly willing to make a peep. But since his name is known and he was officially cleared of suspicion, I worried there was legal reason I shouldn’t be accusatory. I read later in an interview that he claims part of why he was cleared so quickly was that he cooperated with police. Hardly a good enough reason for me, but AGAIN – law enforcement has been nowhere near transparent in their reasons for just about anything to do with Gilgo Beach.

Luckily, I’m far from alone in my captivation. A Websleuths forum has been incredibly active for years, with dedicated members constantly debating aspects of the case and working their way through theories and evidence; at least, what limited evidence has been publicized. It’s been the subject of several TV documentary series, most recently opening Investigation Discovery‘s new People Magazine Investigates with a two-part episode on the Long Island Serial Killer, and this past Saturday, A&E debuted the first two installments of their eight-part documentary series on the case and its extended tangled web, The Killing Season.

I watched the latter last night, and they heavily draw on the myriad theories espoused in the Websleuths community, physically tracking some. It remains to be seen what they actually uncover, or if they manage to draw more attention to crime and danger in the marginalized community of sex workers. In just the first episodes even more new theories pop up. Maybe that’s why this case sticks in your craw, there are so many possibilities, so many coincidences that push the boundaries of belief and the possible. The truth has to be somewhere in between, if you pick the right thread and follow it to its end, there must be an answer, but it hasn’t been found yet.

I recommend the book to any true crime aficionado and anyone interested in American social issues and the social strata, as Kolker tells a bleak story of opportunity and the lack thereof for many who have fallen through society’s cracks. When I review other true crime books, Lost Girls is often my measuring stick. 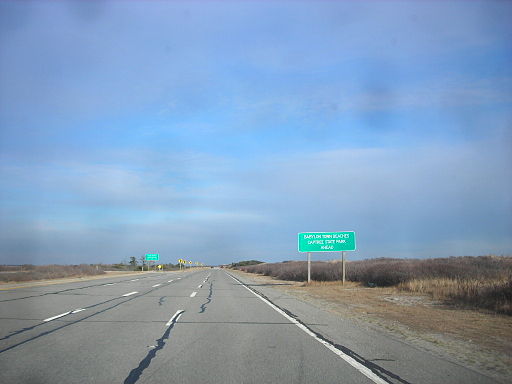 Ocean Parkway in 2008, six months after Maureen Brainard-Barnes went missing. She was found along with three others in the roadside brush and bramble. By Doug Kerr (http://www.flickr.com/photos/dougtone/3229312873/) [CC BY-SA 2.0], via Wikimedia Commons

16 thoughts on “On Long Island, Victims Are a Long Time Lost”