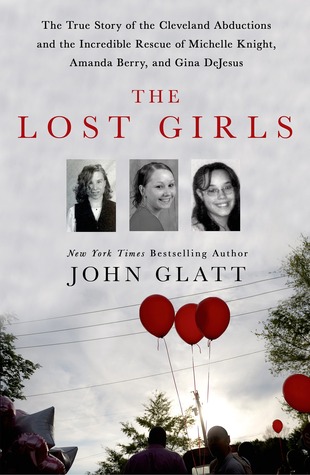 Book review: The Lost Girls: The True Story of the Cleveland Abductions and the Incredible Rescue of Michelle Knight, Amanda Berry, and Gina DeJesus by John Glatt (Amazon / Book Depository)

True crime writer John Glatt’s The Lost Girls is saddled with a painfully long subtitle, I assume to distinguish it from the long list of other books named Lost Girls, and especially from other true crime books called Lost Girls. Let’s stop naming books Lost Girls, ok? Especially because in this case, the girls weren’t lost. They were kidnapped. ‘Missing Girls’ would be more appropriate. In the aforementioned book, about the Gilgo Beach victims, author Robert Kolker creates a convincing case for why those girls actually were lost before they went missing – they’d strayed from a conventional life path, turning to online-advertised prostitution as a way to fix lives that had gotten off track in one way or another.

But Michelle Knight, Amanda Berry, and Gina DeJesus were different. Michelle was going through some rough patches, but she was taken after Ariel Castro approached her in a Family Dollar where she was asking directions to a meeting with a social worker regarding her son. She was nervous about being late because setting things right with her young son was so important to her. The other two were typical high school students. I know it’s nitpicking, but think a title through. It can make a significant difference in tying together a book’s identity.

Rant over! After writing recently about that other Lost Girls, I was inspired to knock this one off of my reading list.

It details the kidnappings and outlines some of the events in the captivity of three young women taken from the streets of Cleveland and kept as prisoners/sex slaves in the decrepit, modified to be its own little prison house of the aforementioned hideous specimen of humanity Ariel Castro. I wondered if it would provide more background of Castro’s, and it did, but in my opinion, it didn’t succeed much in humanizing him. According to his own writings, he can offer no explanation even to himself for why he’s done such deplorable things. It feels like there’s not much to learn here, sometimes monsters just exist.

Also described is some of the international media frenzy that blew up the afternoon that Berry, after catching the attention of a charismatic, destined-to-go-viral neighbor, kicked out the bottom panel of the house’s front door and escaped with her small daughter, who was born while she lived in captivity. It seems maybe this little girl was eventually the key to the loosening of some restrictions and ultimately their escape.

The stories are skewed to the perspective of Michelle Knight. That’s not necessarily a bad thing, because it’s been established that she suffered the severest abuses while in captivity, describing Castro using her as a punching bag. Yet she emerged such a strong, sensible, clear-headed, outspoken, and incredibly, considering her torture; a warm, loving and joyful person. It was in stark contrast to what she’d been through, so I get why the media gave her ample opportunity to express herself. But it does feel like it’s more of her opinion and the voices of the other two are less heard.

Unfortunately, the book devolves in its last third, as I’ve noticed many true crime books that start out strong do, into a courtroom procedural recap. It’s like after the work of assembling a strong narrative through the crimes and some background of victim and/or perpetrator, the author is out of steam so just reports legal proceedings and court trials almost verbatim. It’s boring and adds way too much unnecessary text. Sometimes direct quotes are best, for example I’d never heard Castro’s rambling and weird speech in his own defense, and including it as a whole was absolutely effective. But for the most part, what felt like transcripts of trials coupled with bland narrative of the procedure didn’t add much to the book.

And it’s oddly repetitive – whole sections were repeated, in different wording but the same information. For example, the circumstances of each kidnapping were told in detail the first time around (necessary) then later summarized, not entirely briefly (completely unnecessary). There was also one strange section where the author asserted the women had Stockholm syndrome, explained that phenomenon, then offered no examples of how it applied to them.

For an overview of the case, especially if you’re like me and followed it in total shock horror at the beginning only to stop since the women clearly needed more privacy, less public scrutiny, and since Castro killed himself (intriguing to hear the women’s thoughts on that here) this is a good read. It’s nothing extraordinary, maybe I should’ve read the women’s memoirs for something more meaningful, but I learned the outline of events and I think that was the point.

To end on a cheerful note, considering the hideous subject matter: here’s the theme song from the Netflix series Unbreakable Kimmy Schmidt, which was partly, loosely inspired by the Cleveland kidnapping incident and the media madness surrounding their escape:

The Lost Girls:
The True Story of the Cleveland Abductions and the Incredible Rescue of Michelle Knight, Amanda Berry, and Gina DeJesus
by John Glatt
published April 14, 2015 by St. Martin’s Press