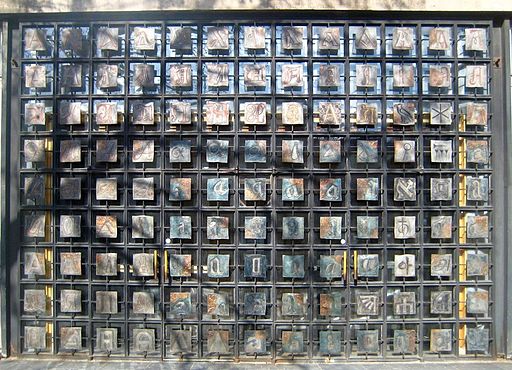 The portal of the Berlin City Library (Berliner Stadtbibliothek) at Breite Straße 32-34 in Berlin-Mitte. It shows steel plates with 117 variations of the letter “A”, created by Fritz Kühn in 1965. By Beek100 (Own work) [CC BY-SA 3.0 or GFDL], via Wikimedia Commons

This is to a very great extent a story of dispersal – about the thousands of libraries forever scattered during the Second World War…But this is also a book about the people who waged a war to defend their literary inheritance, putting their own lives in the balance and sometimes losing them as a result.

Originally published in 2015 in Swedish, journalist Anders Rydell writes a meticulously researched account of the Nazi looting of some of Europe’s great Jewish libraries and collections. Traveling throughout Europe and the former Soviet Union, Rydell visits these libraries and their modern day keepers, many of whom have become a special kind of historical book detective, brushing the dust off of history and whatever remains of the collections, literally and figuratively.

Europe’s looted art has long been a subject of fascination, as Rydell points out, largely due to its value. According to Sebastian Finsterwalder, one of those working to identify the original owners of books that have made their way to the Berliner Stadtbibliothek collection, many, including the German government, are more interested in locating, identifying, and returning plundered works of art, because art is more valuable. Books just aren’t a priority.

A common theme is the connection between books and identity, namely Jewish identities of various European nations that fell under Nazi Germany’s control. Rydell walks through the Jewish history of the regions, each explored in its own chapter, and breaks down how the Holocaust first stole their identities from them before taking their lives: Robbing people of words and narratives is a way of imprisoning them. The way he handles Holocaust history is done very simply but powerfully, making this a great read for an overview of some specific regions’ experience during the Holocaust. He writes lines like: “In a matter of a few months in 1943, four-hundred-year-old Sephardic Thessaloniki ceased to exist”, which certainly drive these devastating events home forcefully.

The plundering of literature that contributed so heavily to culture, in many cases actually defining the culture, was one of the steps in the systematic destruction of European Jews. As history has shown, it wasn’t enough to murder the people: the goal was to completely erase their culture too, leaving it only to be gawked at in museums to demonstrate the great service Nazism would do for the world by wiping out this culture and its people. By destroying books and their connection to memory and identity, the Nazi ideologues, headed up by Alfred Rosenberg, tried to reduce even culture and history of the Jewish people to nothingness.

Rosenberg predicted that a time would come when the actions of Nazi Germany were questioned, so plundering was also for reasons of collecting materials to underscore and illustrate their beliefs. By plundering and collecting the Jewish people’s historical, literary, and cultural legacy around Europe, Rosenberg and ultimately the Institut zur Erforschung der Judenfrage were building the foundation on which, in the future, they would be able to defend and justify the extinction of the Jewish people. This actually led to some books and objects being carefully preserved, and now able to be displayed as examples of prewar Jewish culture.

A beautiful element of this sad story, like so many in this and similar genres, is those people who resisted, often losing their lives in the process. But their stories of bravery and effort stand in stark contrast to the evil of their oppressors, and it’s in no small part thanks to them that something like The Book Thieves can exist. Although much was destroyed or lost, although even today the German government isn’t very enthusiastic about funding projects to identify and return plundered volumes, this was yet another battle that Nazi Germany lost, if quietly.

The photographs of some of these rare books are absolutely fantastic, and it’s worth noting that it’s an excellent, smooth translation that doesn’t actually read like a translation. A must-read for lovers of Second World War / Jewish history and those who like books about books.

The Book Thieves: The Nazi Looting of Europe’s Libraries and the Race to Return a Literary Inheritance
by Anders Rydell, translated by Henning Koch
published February 7, 2017 by Viking