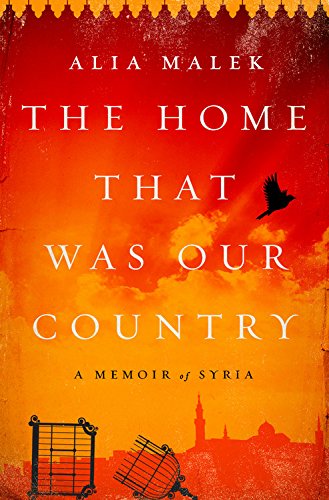 The Home That Was Our Country, by Alia Malek

Journalist and civil rights lawyer Alia Malek was born in Baltimore to Syrian parents. With the memory of her beloved grandmother Salma, the matriarch of their large extended family, and Salma’s apartment in Damascus, she always felt a strong connection and pull to the country. Her parents themselves had always intended to return home, but thanks to strict tenant laws on a rented unit in her grandmother’s building, it was decades before they could take possession of it again and renovate and restore it as her grandmother had always intended.

In this multigenerational saga, both national history and family memoir, Malek tells her family’s history beginning with her great-grandfather, beautifully interweaving her family’s triumphs and heartbreaks with those of the country. Both endured turbulent decades, and the rise and fall of peace and prosperity in Syria itself seems to be mirrored in the family.

She effortlessly ties together these narrative threads, including that of her own immediate family in Baltimore, always longing to return to Damascus and a tight-knit family life but frustrating thwarted in their attempts to do so. Instead their lives, and by default hers, take very different paths than what they’d ever expected. That’s what much of both her family’s and Syria’s history is, and this theme is woven beautifully throughout the stories here – you don’t always get the life you wanted, sometimes for better, sometimes for worse.

The history of Syria and its Middle Eastern neighbors is complex and can be quite confusing for outsiders. With Syria and its refugees thrust onto the world stage in the last two years, questions about how the country arrived at its current state are common, but not so simply answered. Malek is deeply interested in geopolitics, and she has an impressive knack for carefully explaining Syria’s history, from her great-grandparents in the 1940s to Bashar al-Assad’s authoritarian regime, including analyses of the effects of various military actions and political upheavals. It should be required reading for anyone studying or reporting on Syria and the Middle East. Or who even wants to talk about it. Read this first.

What I don’t know about Syria could fill several books, but this is an excellent starting place to understand anything about the country and its people. There’s so much to learn, and her skillful storytelling is the perfect voice to tell these oft-complicated and difficult to follow histories. I was continually astounded. Even from the basics, like the blend of Christians and Muslims who coexisted peacefully, including within the same apartment building run by her grandmother. The family and their neighbors are like a microcosm for the connections and divides of the greater region.

And although her sense for breaking down the complexities of the geopolitical is impressive, it’s really her talent as a storyteller that shines. She describes so richly the scenery, the atmosphere, the people – her words and the story are immersive and haunting. In her journalism and legal work, she’s crossed many borders and been able to interact with and hear the stories of people from different walks of life. Their collection here, bound so tightly to the fates of hard-won autonomies and sometimes shaky democracies, lost to abusive dictatorships and thrown into chaos with the Arab Spring, are impacting and enlightening.

Her reporting especially following the Arab Spring is powerful, as is her shadowing of Syrian protesters and refugees. As Europe and America have erupted in xenophobia over the issue of accepting refugees, Malek helps give faces and identities to the people involved, and to succinctly explain what’s happened over decades to bring them to this place.

On her return to Syria in 2011, Malek writes that “For an optimist, Syria was on the precipice of something better. For the pessimist, it teetered dangerously on the abyss.” She identifies as an optimist, and that optimism coupled with tireless action and a remarkable sensitivity to others along with an intelligent understanding of the entire region’s delicate geopolitics puts her in a unique position to contribute to the country, the region, and to share her family’s history. With such a rich narrative voice and writing style, it’s impossible not to be moved by the stories she tells.

The Home That Was Our Country: A Memoir of Syria
by Alia Malek
published February 28, 2017 by Nation Books (Perseus Books Group, PublicAffairs Books)

2 thoughts on “Story of a Family, Story of Syria”