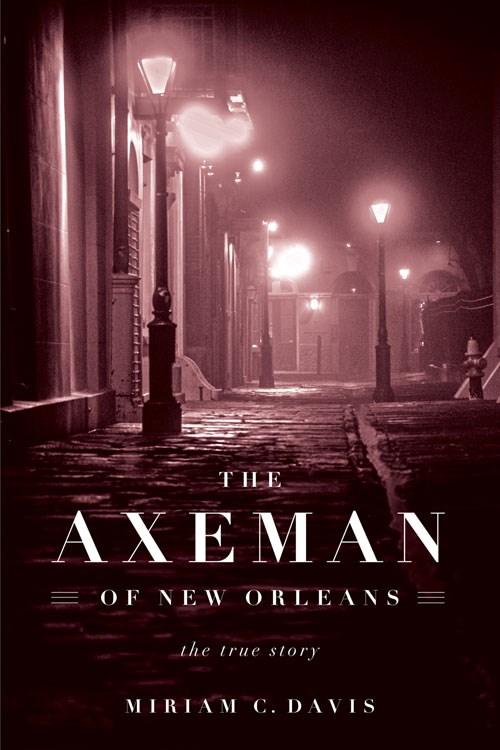 New Orleans is a city that incomparably fascinates. It holds such a strong allure – consistently drawing masses of tourists, both at Mardi Gras time and outside of it, to see what makes this lakefront city so special. Even following devastating natural disasters like the hurricane that rocked the city to its foundations, New Orleans continues to captivate.

And it’s always had a pervasive air of mystery, whether from its historical subcultures of voodoo, fortunetelling and dark magic, or from the many stories and legends that have come out of the city or used it as a backdrop. Some of its attraction and fascination might stem solely from being a landmark city of the American South, itself fertile ground for stories from American history and its progression, both good and bad, light and dark.

One of these is the all-too-real nightmare of the Axeman, a boogeyman who, between 1910 and 1919, claimed victims from among the city’s Italian grocers. Entering through a window or side door, his MO was usually to steal an axe from the yard and bludgeon the married couple who ran the neighborhood grocery and lived in an adjoining house while they slept. Despite a conviction of two wrongfully accused and years of speculation about his possible identity, even today the Axeman’s identity remains unknown, and questions abound about his strange behavior and specific, consistent choice of victims.

Historian Miriam C. Davis thoroughly traces the histories of the Axeman’s crimes and  places them in a detailed historical context, helping to illuminate the city’s personality in this time period and explain cultural circumstances. For instance, she explores the backstory of why there were so many Italian, especially Sicilian, grocery owners, and how they fit into the New Orleans social structure. The cultural framework is a great slice of life picture, and shows how notoriety bled into the mainstream – the Axeman’s crimes were so notorious that a local Piggly Wiggly chain grocery store even tastelessly referenced them in an advertisement.

Helpfully righting the case’s history, Davis debunks common beliefs about suspects and elements of the stories. One of these is a letter purportedly sent by the Axeman, riddled with attention-grabbing delusional statements (Austria’s Emperor Franz Josef was Satan, one example) and requesting that New Orleanians play jazz on one particular night, then the Axeman would “pass over” and spare their homes. The frenzy over the terror of London’s Jack the Ripper was still fresh in mind, and Davis explains how letters believed to be written by the Ripper had influenced someone to try the same here, and who exactly stood to benefit from the specific requests. Her historical sleuthing is impressive, and sheds a lot of light on various elements of the case and what’s accepted as fact.

Another interesting element of the book is Davis’ explanation of memory and its faultiness, and how this affected eyewitness statements, particularly when head trauma was involved. And perhaps just as scary as the Axeman itself is the story of an Italian father and son grocer, both friends and rivals of a victim couple who were also grocery proprietors. Wrongfully accused, one of them sentenced to death, the pair endure a harrowing ordeal hoping the criminal justice system will eventually deliver them from the same fate it decided for them.

Something is left unsatisfied at the book’s end, however. It’s well-known that the real perpetrator was never caught, and that’s always frustrating in real-life cases like these (see: my absolute favorite and constantly referenced true crime book, Lost Girls). But it was disappointing not even to have speculation from the author as to who a potential culprit may have been. With such thorough research and decades of perspective and new research and analysis techniques, I was surprised that she wasn’t able to posit some guesses. In the Axeman’s time, the farthest forensic developments were the relatively new Bertillon system for criminal identification, but beyond these measurement standards little existed. Davis asserts that these crimes could’ve been easily solved today with modern forensic methods, especially since the weapon was always left at the scene.

She presents similar crimes committed later than the established time he was known to be active in New Orleans, these committed in other parts of Louisiana and Alabama. It’s her theory that it’s very likely he moved on and continued the methods that had worked so well for him in the Big Easy, and the crimes weren’t linked up thanks to spotty media coverage that seemingly fell apart when confronted with geographical distance and lack of stark forensic evidence.

What she does do is provide a profile for the kind of man he was, based on what information was available then and modern understandings and profiling of serial killers and how their deeds connect to their personalities and life situations. That was quite interesting, especially her basest description of what kind of person he was: “He was certainly a nobody, a loser, a nonentity with no sense of self who felt that he had no control over anything, not even his own life.” So maybe we’ll have an answer someday, but if not, the message seems to be to remember the lives and stories of those affected, which are given ample coverage here, and consign the monster himself to the shadows of history, where he belongs.