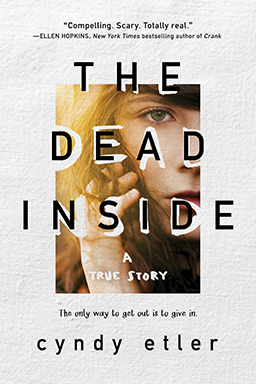 Book review: The Dead Inside, by Cyndy Etler

In the late 80s, Cyndy Etler seemed to be a fairly typical Connecticut teenager. Her real problem was abuse at the hands of her creepy French stepfather, which her mother noticed and ignored, leaving her daughter instead to struggle to defend herself. With that kind of frustration in her home life, it’s not surprising that she focussed on friendships that got her out of the house, especially considering her deep insecurity with herself.

She smoked cigarettes with her best girlfriend, like many teens, and tried pot when it was passed around at hangouts, but she didn’t like it and only took a hit to fit in. Again, pretty typical teenage behavior. Alcohol didn’t tempt her.

Yet somehow, her mother’s frustrations over her fleeing to friends and neighbors to escape the volatile environment at home was enough to send her to Straight, Inc., a now-notorious pseudo-rehab facility where “druggie” (their word, they love it) teens get reconditioned primarily through violence, intimidation, and physical and mental abuse. Apparently Straight, Inc. had a pretty good racket going from 1976 until 1993.  The majority of the patients were very young and mostly pot smokers. Allegations of abuse trickled out, and a Congressional investigation finally shuttered the organization.

But the damage was done. As Etler describes, she left the program with Stockholm Syndrome brought on by trying to survive the inhumane conditions of humiliation and torture, and entertained thoughts of suicide brought on by coping with what she endured and how to reintegrate in everyday life. Many other  Straight “graduates” were not as fortunate and did succumb to suicide.

The memoir traces what would become her downfall, as she begins hanging out with a new friend in another town, gets a boyfriend, experiments with pot and lashes out in anger over her stepfather’s scary, disgusting abuse. She’s moved to a foster center and then to Straight, and there her troubles really began.

Her storytelling voice is conversational, and by conversational, I mean really conversational. This is technically a YA book, written in a style that’s become very popular among YA authors writing on gritty, realistic topics in the past decade. It was too light and flippant for me, considering the subject. Etler has endured abuses that most of us can hardly even stand to watch portrayed in films, and not only survived but emerged stronger: she’s now a teacher of struggling, troubled kids like she once was.

Although I appreciated scenes painted from the young, naive, confused perspective of the teenager she was when she went through them, I would’ve preferred the voice of the adult she is now telling this story. Her sense of humor could’ve still been displayed, with a light narrative tone. But the jumpy, busy writing style was hard to follow and left a sense of disconnection and disorientation, when I really wanted to sympathize with her. Sometimes it was even difficult to fully understand what happened at Straight, where there’s a strange, controlled-yet-still-erratic and confusing choreography to interactions between higher and lower-level patients.

Her birth father, who passed away when she was young, was classical musician and composer Alvin Etler; a composition of his opened Lincoln Center. Music is vital to Cyndy too, and throughout the book she uses it to create parallels to her situations, or almost like an illustrative tool for what she’s going through. It also seems to give her an anchor to return to when she’s terrified, humiliated and bewildered. This identification with music keeps a humanizing touchpoint even as she’s forced to shed her identity and conform to the cult-like behaviors of Straight Inc. to survive.

I wanted to read it initially because it was likened to Susanna Kaysen’s hauntingly powerful memoir Girl, Interrupted – a book I’ve read multiple times and that always stays with me. Etler’s is an interesting and important story, but I think the gimmicky teen writing voice didn’t do it justice. A clear, reflective adult’s voice like the one Kaysen uses to tell her story would’ve made this a much more powerful, impacting work.

The Dead Inside: A True Story
by Cyndy Etler
published April 4, 2017 by Sourcebooks Fire