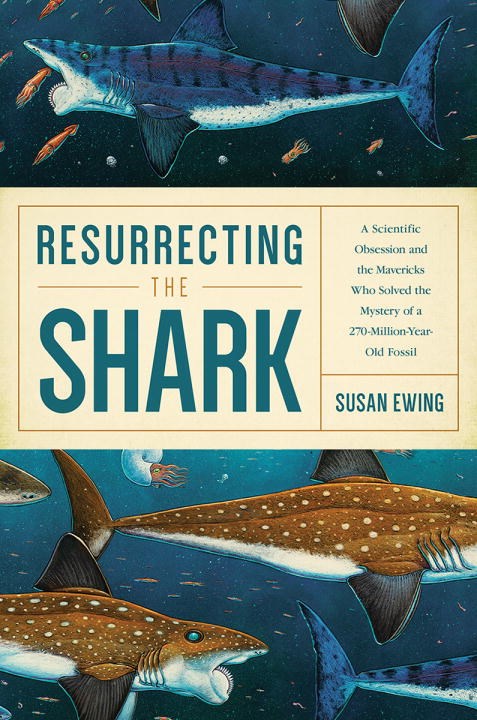 Think of what a shark looks like. Think of the teeth, that unmistakable sign from nature: here is a predator. Now imagine those sharp, self-replacing teeth arranged not in rows but on a buzz-saw whorl, jutting from the shark’s open mouth. The extinct shark Helicoprion had just that, and yes, it was scary as hell.

“But was it just jammed there like a pizza cutter pushed halfway into a quart of ice cream?” Nature writer Susan Ewing has a light, funny, uber-smart but delightedly (mostly) accessible approach to storytelling and asking the right questions, as she describes what’s been pieced together of the fish. The answers are always complicated, with lots of  disagreements between researchers and scientists about how it worked and what it was for.

“Show me your teeth and I will tell you who you are.” This quote by Georges Cuiver, paleontologist and comparative anatomist, opens a chapter and succinctly summarizes how this whole story can be told in the first place. That fossilized whorl of prehistoric shark teeth was the key to fleshing out this fish. Variations of fossils connected to Helicoprion were unearthed over decades in as widespread locales as Idaho; St. Petersburg, Russia; and Perth, Australia. The book takes us to each, as the mystery is solved piece by piece.

If you’re anything like me and the fact that Earth is so old that it’s possible for creatures that once walked or swam it for ten million years themselves to already be dead for hundreds of millions of years, and that there was life walking and swimming it for hundreds of millions of years before they even existed blows your mind, this is a must-read. (And relax, evangelical fundamentalist Christians, they blow my mind because they’re true, not because they’re unbelievable.)

Ewing does excellent work breaking down difficult, complicated scientific concepts for the general reader. She quotes, “[A writer friend] once [said] if you can explain a concept to your bartender you’re a good writer,” She certainly passes that test. I wish that I personally had a better understanding of this topic – beyond high school biology and collegiate physical anthropology, I don’t have any foundation for the science.

But Ewing makes sure that interest alone is enough, not only explaining evolutionary stages and principles and breaking down eras of the universe to their clearest, most fundamental definition, she often references her previous explanations in remaining nudges to the reader. It’s well done and was, for this non-scientific reader, extremely helpful. I was still a little lost sometimes, but that was on me.

She even includes ideas for how to hook people’s interest in the history of this fish: “Introduce Helicoprion to interested but uninitiated listeners as a shadowy harbinger of modern sharks, to conjure the right sleekly swimming visual image. Then tell them they might be surprised and fascinated to learn that this commanding ancient predator was on a fundamentally different ancestral branch than today’s ‘true’ sharks. Explain that even though Helicoprion was at the top of the marine food chain for millions of years, it nevertheless went extinct under uncertain circumstances, at the dead-end of an evolutionary line, leaving no direct heirs. Helicoprion, with its extraordinary tooth-whorl experiment, was literally one of a kind.”

Many modern and historical figures are active in this story as it bounds through history, and they’re a little hard to keep track of. Ewing makes clever asides with many, like noting that one “…had the most impressively long and bushy beard of all the splendid beards of nineteenth-century paleontology.” Others are the modern mavericks, whose simultaneous knowledge and lack thereof about helicoprion becomes obsession.

They establish a research team to hammer out the details, bandying theories back and forth and using modern methods like expensive fossil scans, digital imagery, comparison with modern and prehistoric animal teeth and evolutionary behavior, and advanced drawing and artistic techniques to eventually form images and ideas about how these apex predators, who ruled the oceanic food chain for millions of years, lived and functioned, and a little bit about why they died.

Artist Ray Troll is one such modern figure, who throughout the narrative struggles to get the creature’s appearance right, drawing on the foundational work of experts who become mentors. Part of the fascination and frustration is that so much mystery remains, but the CSI-like descriptions of how each development was painstakingly brought about, accompanied with Ewing’s patient commentary and explanations of paleontologic, biologic, and evolutionary principles is satisfying enough.

Along the way we learn so much about peripheral topics too, not only Helicoprion itself. It didn’t exist in a vacuum of course, and the surroundings of Helicoprion‘s and our worlds are integral to understanding it.

Even before Gondwana [a Paleozoic-era supercontinent] there was the supercontinent of Rodinia (“Motherland” in Russian), the billion-year-old remnants of which can be seen in rocky outcrops in New York’s Central Park. I’ve sat on said rocky outcrops and didn’t even know what they were. This is an incredible book to teach you more about the everyday surroundings you might be taking for granted.

Plus reality checks to remind you how much history lies beneath the soil, the material we walk, build over and use every day, with a subtle message of conservation and care in what we consume: Phosphates are primarily mined for use as fertilizer and in weed killers, but are also used to supplement animal feed, and as an additive in biscuits, processed meats, toothpaste, detergents, carbonated sodas, ceramics, and cosmetics. Who knows how many helicoprions, brachiopods, ammonoids, crinoids, and other mineralized creatures have been crushed along with the copious tons of phosphate ore trundled off to nourish those famous Idaho potatoes, which might have comprised your last order of French fries? Of course mining is also the reason we have as many Helicoprion fossils as we do.

It’s a double-edged sword. Nothing about this science comes easy.

If you’re a lover of natural history museums and all the mysteries, solved and yet unsolved, they contain – you’ll love this book.

Resurrecting the Shark: A Scientific Obsession and the Mavericks Who Solved the Mystery of a 270-Million-Year-Old Fossil
by Lisa Ewing
published April 4, 2017 by W.W. Norton