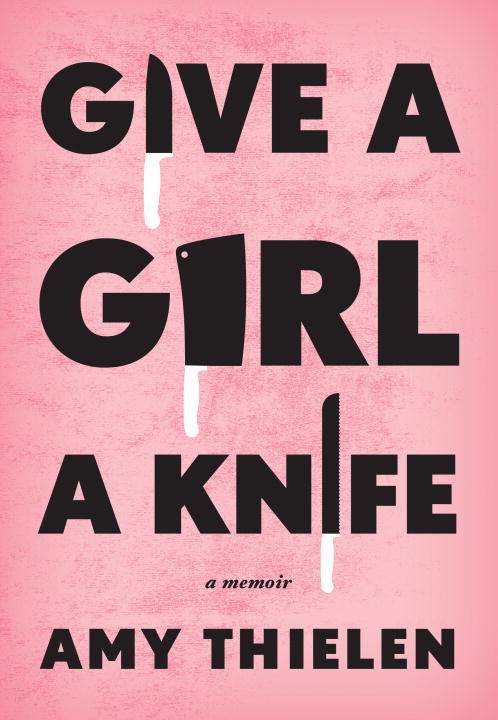 Book review: Give a Girl a Knife, by Amy Thielen

Amy Thielen, host of the Food Network’s Heartland Table, is a girl of two worlds – the ultra-high-end, gourmet restaurant kitchens of New York City, one of the most competitive restaurant environments ever; and her folksy home of rural Minnesota, where she honed her cooking skills and “taste memories” drawing on her parents’ French-Canadian, German, and Eastern European immigration backgrounds and kitchen tips.

I love a good fish-out-of-water memoir, or in this case a fish who jumps back and forth between two ponds because it’s not really sure anymore which one belongs it in. That’s the dilemma Thielen grapples with for many years – which life does she really want? The quiet one in a primitive, back to basics house in the woods hand-built by her husband, artist and sculptor Aaron Spangler, harvesting their vegetable garden and pumping pure water by hand; or the one in vibrant, multicultural Brooklyn, including working 80-hour weeks cooking in the city’s top kitchens, exhausted and underpaid but fulfilled?

After determining the Big Apple is the best place for them both and their nascent careers; hers in professional cooking and his in visual art, the couple leaves their shared hometown of Park Rapids, Minnesota for a Fort Greene, Brooklyn sublet. The journey lasts the next seven years, as Amy and Aaron spend part of the year working to the bone in New York, then spending three summer months in their woodsy home in rural Minnesota. They get their experience, they grow and learn, and eventually they have to decide in which ground to finally put down roots.

Thielen tells stories of her evolution as a cook, looping in her childhood, colorful family, and combination of luck and undeniably hard grunt work in kitchens. She makes a career by fusing her two loves, haute cuisine and down-home, Plains-state traditionalism. The heartiness of earthy Midwestern food combined with international culinary culture, like that in Danube, the high end kitchen where she begins her career as an intern during cooking school, contrast strikingly with the kitchen where she explores her familial roots in the summertime, somehow managing to thrive as a cook in a facility without electric or running water.

In New York, Amy works in the restaurants of renowned fine chefs David Bouley, Daniel Boulud, and Jean-Georges Vongerichten, cooking foods that I can’t even imagine eating, let alone preparing. Here, she describes gröstl, a common hearty fried-up leftovers dish in Austria, as it’s prepared in Danube, an Austrian-influenced, uber-fancy Manhattan restaurant: “Gröstl, the Austrian term for the mixed bag of leftovers Tyrolean grandmothers might fry up in a cast-iron pan for skiers returning home from the mountain, otherwise known as hash. Our gröstl was made with a lobster claw, a pad of seared foie gras, and some tissue-thin veal tortellini – you know, just some scraps from the kitchen.”

She takes every step and surprise as part of the learning process, both professionally and personally. She allows memories of her childhood and foundational connections to food, cooking, and feeding others to rush back as she experiments. It was a fascinating, nostalgic process, even reading it secondhand. She and her husband, in their restlessness, become “exiles who pine for difficult pasts,” as she puts it.

This is another in my recent kick of “foodoirs” (food memoirs) and I’m late to the party – just doing some light research about this one, I saw it’s the latest in a long line of tales from the fiercely competitive, high pressure gourmet kitchens of New York. Those chapters were absolutely my favorites here – Thielen has a knack for capturing quick but evocative sketches of the characters she worked for and with, and for making the high-energy kitchens come alive on the page.

Her background makes this unique – she’s forever tied to the flavors of her Midwestern youth, both quite literally in her cooking preferences and emotionally. Her recollections of American pantry staples are kind of delightful, and at least for me, completely evocative: “Onion soup mix, with its telltale rattlesnake shake and its burned-sugar-and-soy tang, possessed the power to reach through the decades and jolt all my dead memories alive.” I love finding others who also appreciate the apparently underrated Lipton onion soup mix.

And she employs a thoughtfulness as she recalls early community aspects of her relationship to food. That’s a big topic here; how food is distributed and shared in a community, strengthening those bonds through our shared needs and dishes prepared “with love”:

Later I would roll my eyes at the [ice cream] buckets, because I couldn’t see these milky, repurposed, plastic gallon containers for what they really were: a symbol of the whole community’s eating, a marker of generosity and thrift at the same time. In any other place, these ideas of abundance and frugality would sit at odds with each other, but in the Midwest of my youth they were bosom buddies…The irony is this: Many of the traditional Midwestern favorites require a lot of time and effort to make but no one would ever want to say so. A neighbor lady might make potato salad by the gallon, spending an hour dicing potatoes into baby-bite-size cubes, but then, with consummate modesty, as if to say “No big deal,” she would carry it around in some junky, old reused plastic tub.

The excitement of the writing waned in the sections detailing life off the grid in the forest. As passionate as she is about this pioneer style of living, and committed to the difficulties of it (which I was totally impressed by), the story lacked momentum, it slowed – like the days there did.

It’s an interesting, engaging read, sure to appeal to foodoir (sorry, I love that word now) lovers like me, even if also like me you’re a completely amateur cook (no recipes included) and not even particularly interested in the high-end kitchen world. I loved the juxtaposition between her two worlds, and how she maintained a positive, upbeat attitude in her transitioning between them. She also displays a healthy ability for introspection, for admitting failure and mistakes and learning from them, something I appreciate in memoirs.

The timeline of the narrative was a bit off, resulting in the same stories being told multiple times, such as the initial decision to move to New York and traveling there. It felt like deja vu. She returns often to the same scenarios and situations, looped in a very roundabout way through the narrative. It’s confusing. It also includes a superfluous amount of details that detract from the overall story and feel too personal, odd as that surely sounds for a memoir. There were indulgent, personal details that didn’t contribute meaningfully to the plot or story, and I’m always frustrated when an editor lets that slip.

But it’s entertaining and sure to be meaningful to anyone who’s felt torn between places, cultures, past and present.

Give a Girl a Knife: A Memoir
by Amy Thielen
published May 16, 2017 by Clarkson Potter Publishers, Crown Publishing Group (Penguin Random House)
I received an advance copy for review courtesy of the publisher.