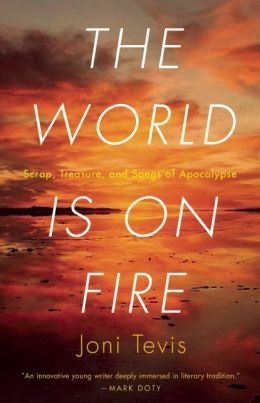 Book review: The World is On Fire, by Joni Tevis

Joni Tevis has a strange talent for writing essays that combine the most unlikely, unrelated subjects, skipping without any obvious connection between topics and somehow making it work as a coherent, emotional, interesting piece. I’ve never read anything quite like it before. As one example, she writes an essay contrasting her own struggles with fertility with an obsession with Freddie Mercury and the song “Somebody to Love”. I’m repelled by any discussion of fertility issues, and yet this wasn’t so bad.

Her writing style is more poetry and lyrical than prose, sometimes veering into vagueness in terms of what exactly she’s describing, or plain melodramatic. But it’s an interestingly structured essay collection and encompasses so many different subjects that more than anything I felt like I learned something from it. Sometimes that’s what you’re looking for in reading material, sometimes not.

The main subjects are travelogues relating impressions and histories of some of the stranger, offbeat elements of Americana, or off-the-beaten-path tourist attractions (one essay about Philadelphia’s Mütter Museum and Florence’s La Specola museum with its famous anatomical wax Venus was simultaneously horrifying and lovely, like these kinds of museums themselves).

“Buttons of salt on nail heads, rusty radio stuffed with sand: if you go looking for a portent, everything you find will seem like one.”

One essay describes the processes of the artists who created the dioramas for New York City’s Museum of Natural History, how they visited the natural locations and drew and painted there, trying to capture the outdoorsy, sunshiny essence of the place and recreate it in a glassed-in museum box in a windowless room back in Manhattan.

Tevis is fixated on one diorama of a possum and fox from the Hall of North American Mammals. The whole piece made me think about how much went into those dioramas, which many visitors (myself sometimes included) breeze by nowadays in search of something livelier, flashier, more tangible. She shows how these were works of art themselves; no small feats.

Other stories include that of Sarah Winchester, the widow of William Wirt Winchester of the Winchester Repeating Arms Company. After his death, believing her family cursed, she built a now-famous landmark mansion in California, a sprawling work of bizarre, seemingly random architecture with features like staircases leading to nowhere. All the weird details were suggested by a psychic, meant to confuse the spirits of those killed by Winchester rifles that were haunting her family. This story is so eerie to me, my interest is always piqued when it comes up in a book and I liked her wistful, wondering treatment of it.

A major focus is obviously apocalypse, and how the idea connects to concepts like life and faith. In one piece she ventures to the Nevada desert test sites of atomic bombs, and manages to tie in the story of Buddy Holly et al.’s deadly plane crash. This was an impressive piece: it seemed like it shouldn’t work, these two diverse topics and a lot of speculation about details of the time and feelings thrown in, but it did. I’ve never been so interested in Buddy Holly as to hear her tell it.

In another piece set again in Nevada under the haunting specter of the nuclear testing, Tevis visits the now-shuttered Liberace Museum, linking his artifice and performance with that of Doom Town, a fake town that was bombed repeatedly for decades for tourists’ amusement, to show what an apocalypse would look like.

Her words are art, painting imagery so strong and vivid, reading these essays are almost a visual experience, not only a literary one.

“Put yourself in his shoes. Picture him standing there in the chill dark before dawn. Wrapped in a plain jacket, waiting, nobody watching, longing for something like the fire that consumed the world. Something to wipe all this clean, all the props borne along in a cloud of dust on the precursor-forming surface. They say it’s the most gorgeous thing you can imagine. You have to see it to believe it.”

That’s her imagining of Liberace, stripped of his signature glitz and pretense, slipping away into the desert near his onetime home to watch the firings. If you like ideas like this, descriptions like this, in this paced and slowly-revealing language, you’ll like the book.

Others appealed less, mostly for me the ruminations on faith and God, being pregnant and giving birth, these subjects. Tevis is haunted by the Revelations-fueled sermons of her religious, fire-and-brimstone Southern upbringing, so it’s understandable that she feels the need to chase down real-world examples of apocalyptic themes, or to muse out their meanings by weaving together memories and ideas of past, present, and future. I shy from serious consideration of religion as a reading topic, so occasionally it irked me, though she did pick some of the linguistically appealing, evocative lines from Revelation to divide one essay and it was a great touch.

And I loved the connectedness to nature, the wonder in simplicity and shiny things. Her language is often beautiful, rich and evocative; sometimes purple and over the top. Writing about it, I realize I felt very much love/hate about the whole book, but it’ll appeal to literary tastes.

The World is On Fire: Scrap, Treasure, and Songs of Apocalypse
by Joni Tevis
published May 12, 2015 by Milkweed