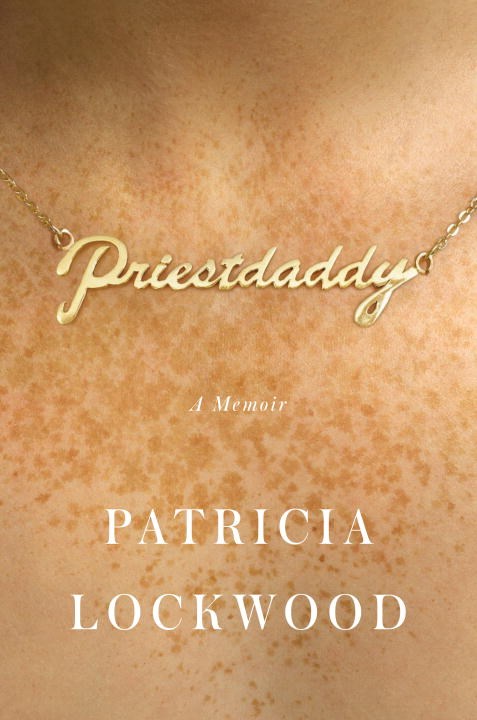 “We are congregating in the dining room of my father’s rectory in Kansas City, where I have returned to live with my parents after twelve long years away…We are penniless and we are exhausted, and in the grand human tradition, we have thrown ourselves on the mercy of the church, which exists for me on this earth in an unusually patriarchal form…It walks, it cusses…it is currently shredding its guitar upstairs…”

Poet Patricia Lockwood and her husband Jason move in with her parents in Kansas City, Missouri, following sudden financial troubles including Jason’s pricey eye surgery. Lockwood chronicles the nine months there with a hilarious, intelligent, lyrical voice, and a penchant for observation and commentary coupled with beautiful language only a poet could create.

That family home happens to be a rectory, and her father happens to be a Catholic priest, and if you’re wondering how that’s possible (I was intrigued): he was a Lutheran pastor, and there’s a conversion loophole allowing married priests-to-be to keep their wives, meant to encourage entering the priesthood from other religions.

The Vatican must approve the incoming priest’s application, and her father’s was given the okay by Joseph Ratzinger. As Patricia identifies him: “Later to take the name Pope Benedict XVI, later to resign the papacy and become an enigma in fine elfin shoes wandering through private gardens, his eyes among the bushes like unblinking black roses.” If you can find the humor and appeal in that description, you’re going to love this book.

Lockwood can be in turns both painfully hilarious (really, I laughed until I hurt) and deeply introspective. She doesn’t shy from difficult topics like the Catholic church’s history of sex abuse (side note: even more present than usual in the news now, is anyone else sucked in by “The Keepers”?!), or some of the recent contentious issues (e.g. women’s rights) that have split political parties and have the Church’s influence written all over them.

Out of some combination of boredom, distress, uncertainty, fear, and the special kind of introspection that we only seem capable of when returned to our origins, she begins recording scenes and conversations from her family, while probing memory for important happenings from their pasts. She’s fundamentally different from her conservative father, and certainly as an adult returned to your parents’ home and their set ways, which you’ve spent years growing up and away from, it’s a jarring shock to be back under their control, to see them from your changed perspective. It’s a shock sometimes just to imagine you’re of them.

Her father’s favorite hobby is lounging around the house wearing transparent underwear and nothing else. She has to confront even the idea of the physical aspect of her origin. She somehow manages to turn uncomfortable scenes like this poetic and whimsical: “I like to think I sprang from a head; I like to think the head was mine.”

Father Greg Lockwood converted to Catholicism while stationed on a submarine during the Cold War (he loves submarines, and won’t read his daughter’s books because there are no submarines), where he watched The Exorcist 72 times over the course of patrol. His daughter imagines the drama of those circumstances:

“You’re a drop of blood at the center of the ocean, which plays a tense soundtrack all night long, interspersed with bright blips of radar. Russians are trying to blow up capitalism and you’re surrounded by dolphins who know how to spy and the general atmosphere is one of cinematic suspense…Down in the amniotic sea, ready to be born again.”

He’s conservative, loves guns, hates hippies and cats and thinks they’re Democrats (cats, that is), they’re “little mean hillary clintons” who would have abortions for fun if they could, and a deer is “a peace sign made out of meat, and the only way to fight it was with bullets”.  When his daughters question why he wants to hunt deer, he says there are too many of them and they eat gardens. Which is suspicious, because as she notes, “Flowers registered to him as very small bitches, far off in the distance.”

Her mom’s also a Character with a capital C, a resilient and opinionated Midwestern mother of five with a sharp sense of humor, unending well of patience, and mothering instinct enough for the world. She knows she’s “quotable” and provides plenty of material giving a window into their lives.

Patricia herself has a wild, raunchy sense of humor and yet a delicate sensibility and sensitivity for the human condition. I loved that juxtaposition; her ability to switch between witty, kooky observation that makes you cry with laughter, then to break your heart in the next chapter as she describes some painful yet common episode in growing up, breaking with faith, being afraid, becoming a woman and realizing what that means.

“I know all women are supposed to be strong enough now to strangle presidents and patriarchies between their powerful thighs, but it doesn’t work that way. Many of us were actually affected, by male systems and male anger, in ways we cannot always articulate or overcome. Sometimes, when the ceiling seems especially low and the past especially close, I think to myself, I did not make it out. I am still there in that place of diminishment, where that voice an octave deeper than mine is telling me what I am.”

Obviously she and her husband have a lot of soul-searching to do during their stint back in the nest, and it ties into this sense of where you came from and who you’ve become, how one has shaped the other, and how far away you can ever really expect to get.

“Part of what you have to figure out in this life is, Who would I be if I hadn’t been frightened? What hurt me, and what would I be if it hadn’t?”

Lockwood got her second book of poetry published by Penguin after her long-form poem “Rape Joke” went viral on The Awl. It’s another example of her unique style and ability, to thread together the horrifying parts of life with the humorous, and to make it all hit home somehow, despite the experiences being scary, uncomfortable, and so specific to her. It’s an incredible talent.

“When you cannot pinpoint a pain in your body, the whole world seems to throb with it. Trees in pain, lit windows in pain, Wednesday nights in pain.” I can’t think of a better description of teenage angst, although in this case it’s coupled with the unusual home environment of living in a rectory haunted by the past and blanketed under the heavy oppression of Catholicism. On a lighter note? “At one point I shaved my head, which Britney Spears later taught us was a sign of madness.”

I wanted to read this slowly and savor it but it wasn’t possible. I tore through it in 24 hours and would have read hundreds of pages more if they’d been there. It’s one of those rare books I wish I could read again for the first time, and be surprised and tickled and emotional all over again.

“A trick I often use, when I feel overwhelming shame or regret, or brokenness beyond repair, is to think of a line I especially love, or a poem that arrived like lightning, and remember that it wouldn’t have come to me if anything in my life had happened differently. Not that way. Not those words.”

Priestdaddy: A Memoir
by Patricia Lockwood
published May 2, 2017 by Riverhead Books