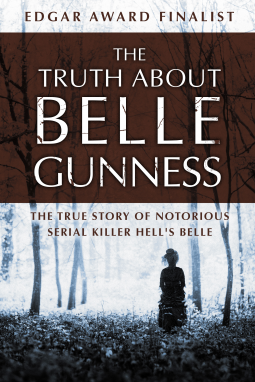 On a spring day in 1908, police were called to the scene of a fire in a farmhouse in La Porte, Indiana. In the ruins of the house, they discovered four bodies: three children and a headless adult believed to be the farm’s proprietress, Belle Gunness. A former employee, Ray Lamphere, was charged with the murders.

But much about the situation didn’t sit right with investigators or town citizens. Evidence as to what was wrong was later unearthed when a man named Asle Helgelien arrived at the farm looking for his brother Andrew, who had left Aberdeen, South Dakota a few months earlier to meet Belle through a newspaper lonely hearts ad, but never returned.

Sure enough, once they started digging, his remains were found, and a number of other “soft spots” in the dirt around the farm and in the pig pen yielded a dozen sets of human remains, plus strange things like a suspicious number of men’s watches.

A widow twice over, the Norwegian-born Belle had begun killing her husbands to commit insurance fraud and then couldn’t seem to stop. She was viciously manipulative too, managing to finagle what she wanted out of doctors, investigators, and her hired help, all to maintain her growing murder-for-money schemes.

She placed the lonely hearts ads in Norwegian-language newspapers and men traveled from throughout the Midwest to meet her with a mind to marry. The ads or her corresponding letters always instructed them to bring cash to support the marriage or the farm. But this prolific “black widow” lured and killed at the very least 25-30 men and potentially many more, making her one of the most prolific serial killers in American history. Spooky.

Spookier, the biggest remaining mystery is whether Belle herself actually died in the fire, or if it was all an elaborate setup so she could escape her farm (which sounded like it was running out of burial space, honestly) and start anew.

Prolific novelist Lillian de la Torre wrote this account of Belle’s crimes, or at least what was known about them, and their aftermath in 1955. Open Road Media just released a new ebook edition; when it was originally released, the book was a finalist for the Edgar Award. It holds up for the most part. As the title promises, it’s indeed factual but with a readable narrative structure and none of the breathless sensationalism that often accompanies crime fiction or nonfiction of the era.

The majority of the book is about Ray Lamphere’s trial and the town’s and media’s reactions to his and Belle’s alleged crimes. The biggest question is how much truth he was telling, and to what extent he was involved. And of course, if the body in the fire was actually hers, and if not, where she was. The story itself is compelling (if uncomfortably gruesome) but the trial aspect and its repetitive courtroom dialogue dragged somewhat.

De la Torre posits an interesting theory about how Belle met her end and who may have helped her escape, and based on what was presented up until then in the book, it sounded plausible.

She alleges that Belle “avenged a long resentment against male domination”, and realized she could “free” and “enrich” herself at the expense of lovestruck men. She has theories about Belle’s use of sex and her obsession with power and dominance over men, which do make sense based on what we know about murderers and serial killers especially. It’s all interesting enough, if brief and ultimately inconclusive. Much of this has to do with the times and the limited forensics available then.

Speaking of which, there’s no update to the case included here, but some Googling revealed that 100 years after the fire, the remains of Belle (or the body from the fire believed to be hers) and the children were exhumed and DNA testing was done to determine conclusively whether it was Belle who died or if she escaped. Bizarrely, there were children’s bones mixed with hers in the coffin. This story gets stranger and stranger, even 100 years on.

The results were inconclusive; the mystery remains.

A quickly readable account of the basics of a very strange character in Indiana history.

I received an advance copy of the new edition courtesy of the publisher for review.