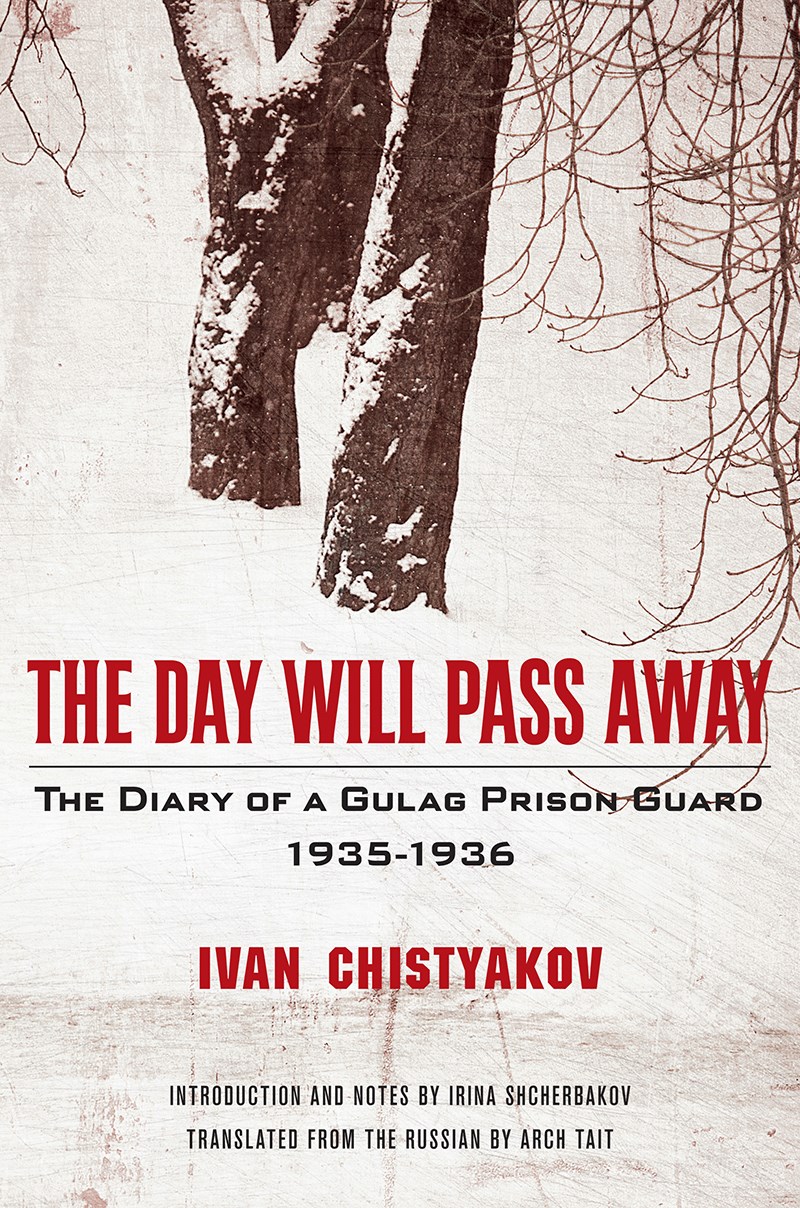 Book review: The Day Will Pass Away, by Ivan Chistyakov (Amazon / Book Depository)

So even my inner word recedes day by day into eternity until it reaches freezing point. You start believing they can make you lose all emotion. Yet every day brings you nearer to freedom. Only, what kind of path are you walking to get there? A path of defeats, misery and rage. A path that makes you even more contemptible, a path humiliating to the humanity in you.

The Day Will Pass Away, a new translation from Russian of a troubled Gulag prison guard’s diary, was discovered amongst a relative’s papers and given to Memorial, the Moscow-based human rights and historical preservation organization. Aside from his found notebooks, not much was known about Ivan Chistyakov. He led a fulfilling, cultured life in Moscow, until his expulsion from the Communist Party during purges in the 1920s/30s.

He’s eventually released from Gulag servitude, but knowing the date and his relatively young age, we know even before we’re told of what’s looming on the horizon of history, what his fate will probably be. Indeed, he dies at the front in 1941, making his personal diary all the more poignant and important, capturing a heavy year in a short life.

His appointment as a guard is punishment itself; though he’s not a zek (inmate) he’s imprisoned without hope or knowledge of when his incarceration will end. But he manages to retain his humanity, as well as a dangerous sense of nostalgia for pre-Revolutionary Russia, which isn’t much concealed in his writings.

The diary provides a daily account of one year guarding the unit, describing the minutia of each day, the rampant corruption, inhumane conditions, and what the inside of his head looks like with each step. He writes despite the inherent danger to himself, since much of the diary could be interpreted as anti-Soviet if it were found and read. “Oh boy, this diary is going to provide a lot of evidence,” he scrawls mid-rant in one of many diatribes about the repulsive living conditions. But writing it is his saving grace, a last cling to sanity through culture, a way to flesh out memories of life before the Gulag.

Ivan ponders suicide or committing a crime as options to escape his desolate post. His biggest dream is simply to return to Moscow, enjoy his hobbies and fulfilling work again, and to humbly earn 300 rubles a month. It’s sad and disheartening in the simplicity of things we take for granted and that would’ve meant so much to someone in his position, but he perseveres, talking himself through despair: “There are drifts of snow spiraling. I feel sick at heart but I’m not giving in. I will find a way out of this.”

Irina Shcherbakova writes in her introduction, “He drew strength from the countryside, the taiga forest, the hills he described, the landscapes he drew. These are the things that he had to set against the horror of life at BAMLag.”

Ivan sometimes peppers his narrative and observations with Forrest Gump-like musings, showing how hard he tries to push himself to go on under brutal Gulag conditions:

Life is like riding a bicycle: you pedal along and try to steer, but first there is mud, then a pothole, then you have to swerve to avoid a sharp stone. But if you stop pedaling, you’ll fall off.

Recalling his cultured background, he tries to take pleasure in whatever he can; this sometimes manifests in nostalgia-laden, carefully recorded descriptions of the weather and its unique attributes in Siberia: “A tardy ray [of the day’s last light] flashes out, as if hastening after the sun and, as it vanishes, bestows a smile, like a girl who has said goodbye and, walking away, looks back from a distance.”

His observations on the mechanics of life in this place, and of the typical interactions between those exiled, are invaluably enlightening. Observing an accident brigade repairing a broken train rail, he writes: “Silently and confidently, everyone does his bit and the passengers in the trains have no idea that their lives have been saved in this quiet, straightforward, businesslike, understated way. It’s a simple truth that, in many ways, people going about their daily work without a fuss are the real heroes.”

Such everyday philosophy is juxtaposed against the surreal violence of the camp system: ‘Shoot me if you like,’ a prisoner threatens. ‘No problem. If need be, we will,’ he thinks during one interaction. The casual tone and attitude bely what he actually feels, which is horror and depression at being forced to participate in this vast machinery of repression coupled with tedious bureaucracy under an increasingly paranoid and controlling political system.

Literature from the Gulag isn’t uncommon; whether fictional like Solzhenitsyn’s One Day in the Life of Ivan Denisovich, or nonfiction, including his Gulag Archipelago and Evgenia Ginzburg’s Journey into the Whirlwind, a classic memoir from a prisoner’s point of view. Anne Applebaum wrote the definitive historical work, Gulag, which includes many related perspectives and a lot of raw history.

But this is unique, written so honestly from a guard’s perspective as it is, not holding back thoughts and feelings. It’s shocking, I couldn’t believe he was so forthcoming and blunt. As the introduction notes, “We have few memoirs written by people on this side of the barbed wire.”

A touching, eye-opening memoir of a dark period in history that even now we struggle to understand accurately when so much has been concealed or destroyed.

The Day Will Pass Away:
The Diary of a Gulag Prison Guard: 1935-1936
by Ivan Chistyakov, translated by Arch Tait
published August 8, 2017 by Pegasus Books (W.W. Norton)

3 thoughts on “A Voice from the Gulag”