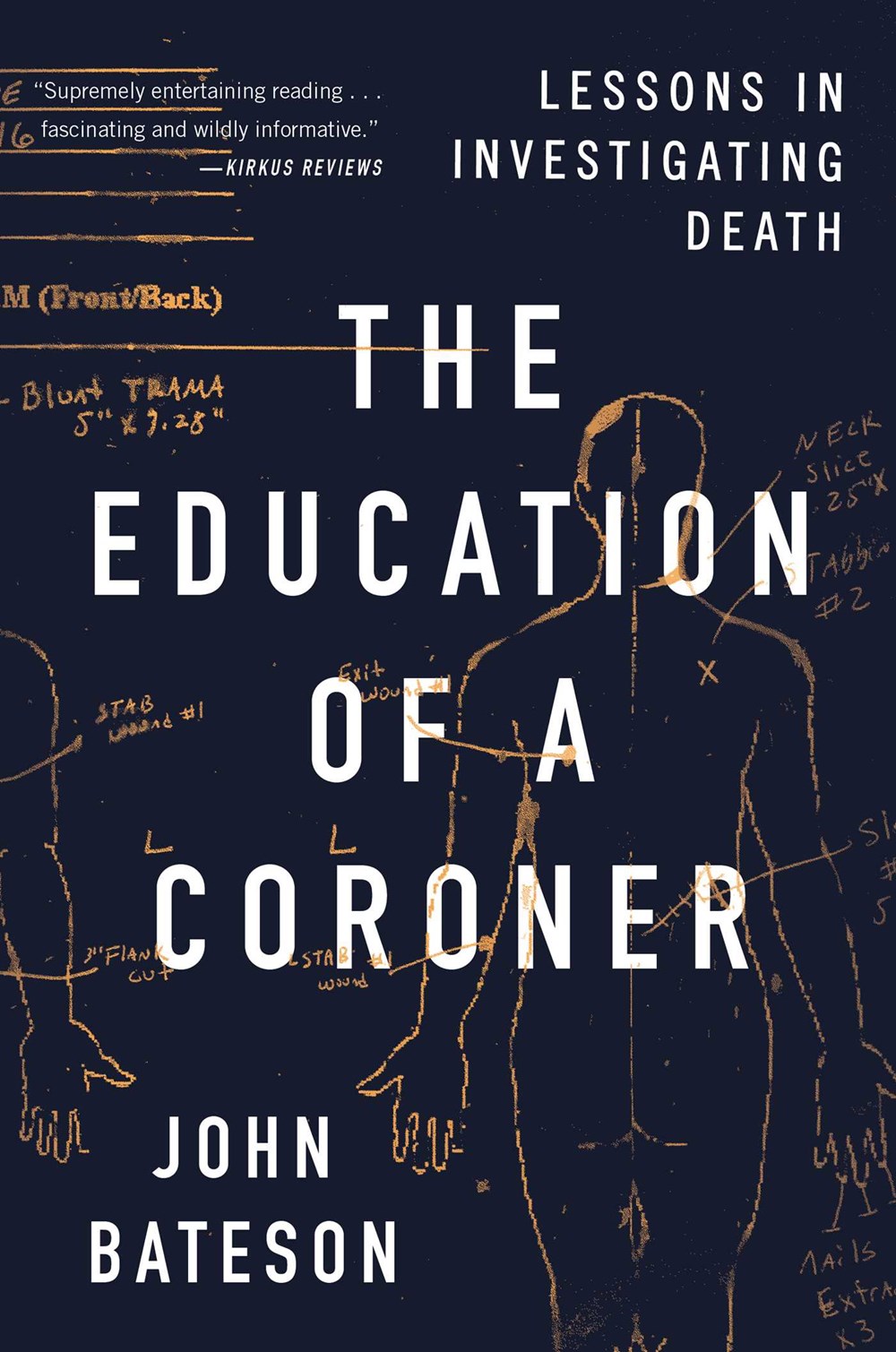 Book review: The Education of a Coroner, by John Bateson

“When it comes to county government, the coroner’s office often is the forgotten stepchild. People don’t want to think about it, and they definitely don’t want to know any details of how it operates.”

Longtime Marin County, California coroner Ken Holmes tells tales from his line of work and a long, experienced career, and disproves that statement – morbid as it may seem, there’s plenty that’s fascinating to know about the coroner’s office.

He also discusses why he chose a profession in death investigations and what he’s been able to contribute to the community through his services. Although not prolific, what insights he offered were quite telling and, for me, pleasantly surprising.

“Every death has a story,” Holmes says, “just like every life. Coroners are privy to it in ways that other professions are not. That’s what draws people like me to it, the chance to be present, understand, and help others deal with something that usually is awful, at a time when people tend to feel most alone.”

Author John Bateson got to know Holmes while interviewing him for another book about the many suicides committed at the Golden Gate Bridge. Intrigued by the glimpse of what Holmes had encountered in his career, Bateson had more questions. “I didn’t know much about the workings of a coroner’s office, and wanted to learn more. How do coroners approach a death scene and what do they look for? How are families notified of a death, and what psychological techniques are employed? How has the world of forensic pathology changed with advances in technology?”

If you’re also interested in those answers, this book is for you.

Holmes is a 36-year veteran of the county’s coroner office, where he began his career as a death investigator and went on to serve three elected terms as coroner. Unfailingly passionate about his work and a natural storyteller to boot, he recalls fascinating details and anecdotes from the decades his career spans. He relates them to Bateson alongside his career trajectory.

I learned a lot that I didn’t expect to. I thought it would be mostly the odder, more unusual stories from his duties, but there’s a lot of medical science that accompanies his casework and it’s well-told. For example, I learned this:

The timing of the autopsy can have an effect…because digestion continues after death for as long as food enzymes are working in the stomach and small intestine – generally four to eight hours.

During the spate of JonBenet Ramsey documentaries airing for the 20th anniversary of her murder last year, I was curious each time the digested pineapple found during her autopsy was mentioned. The timeline always indicates that she must have died shortly after eating it, so I kept wondering why it was already in her digestive tract instead of stomach. Now I know! Yes, I could’ve googled it instead of just idly wondering, but I wasn’t even sure how to google that.

There are many such facts and explanations as Holmes unpacks the reasoning behind his rulings, so this is never an uninteresting read.

Marin County was a curious, contradictory jurisdiction to serve. It houses half of the Golden Gate Bridge area as well as San Quentin prison. It’s highly affluent but also sees an unusually high number of drug overdoses and alcohol-related deaths. So the cases Holmes handled are interestingly varied, but the most compelling chapters for me were the ones that addressed suicides. The subject was handled compassionately, and it was intriguing learning how the coroner’s office worked to differentiate between murders and suicides.

“This is the last place I will step, breathe, speak, or cry,” a teenager wrote on her arm before taking her life, one of the haunting notes she’d scrawled all over her body. The section about the Golden Gate Bridge suicide victims and how such a large rash of deaths finally changed the bridge’s safety structure for the better, was especially well-done.

I was reminded throughout of the HBO docuseries Autopsy (most, if not all, episodes on YouTube.) In the show, medical examining superstar Michael Baden tells intriguing, often bizarre or unusual stories from his career, usually how examination of bodies led to solved cases. It’s completely fascinating. I highly recommend it, but never watch it while eating anything, ever. Even drinking water is iffy. It’s pretty graphic.

Near the book’s beginning, Holmes clarifies the differences between coroners and medical examiners, and explains a little about how those roles differ and how they’re employed state to state. I was surprised by how wildly different the two positions operate in various states and counties.

In addition to his recollections of workplace stories, Holmes also talks about how his profession shaped his views on life and death. “The more time you spend around death, the more you appreciate life.”

Bateson acknowledges that in writing Holmes’ stories, he chose to only tell them from Holmes’ perspective, as they were related to him, without considering other angles or viewpoints. It’s great that he acknowledged this, I wish more authors would do similarly when they make these storytelling decisions. But I think the book did suffer somewhat from lack of outside research. Some stories fell a bit flat without any descriptions or explanations beyond those told here.

I do want to point out how disturbed I was by one of the Golden Gate Bridge suicide anecdotes (not a spoiler.) While tracing the identity of one jumper, Holmes learns that the man visited sex workers in massage parlors and maybe paid for his drivers there too. I was disappointed that this was left as is, because I think these places aren’t usually spots where women are working willingly. It was glossed over in a way I found incredibly upsetting.

So I’ll post a link to the Bay Area Anti-Trafficking Coalition, an organization fighting human trafficking. Maybe I’m overreacting, it was part of the case story and I don’t think it shouldn’t have been told, but it was done so casually without consideration for the women involved. This guy was living his best life, intending to end it soon, and that indulgence happened to include the exploitation of young women who may or may not be willing participants, but hey, he was so nice and bought them ice cream afterwards! Vomit.

I read the book for free as an advance reader’s copy from the publisher, so I’m donating its price to BAATC. It’s not much, I know, and I wish I could spare much more, but it bothered me and I wasn’t sure how to feel better about it. To note: it doesn’t say they worked against their will, that’s completely on me. I was still bothered. BAATC does good work and supports nonprofits and education programs. If you read this book, maybe give donating a thought. Just an idea!

Otherwise, it’s a book that sheds needed light on a profession of much curiosity and perhaps even more misinformation. Eye-opening vignettes from a passionate worker doing an important service.

The Education of a Coroner: Lessons in Investigating Death
by John Bateson
published August 15, 2017 by Scribner

I received an advance copy from the publisher for review.

4 thoughts on “Life Lessons Learned in the Service of Death”