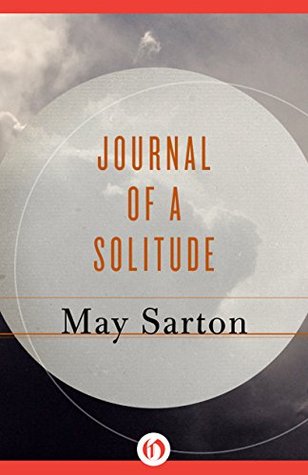 Book review: Journal of a Solitude, by May Sarton (Amazon / Book Depository)

Writer May Sarton retreated to a cottage in New Hampshire for one year, where she holed up and wrote and confronted the seasons, both of the year and of her life. Journal of a Solitude is the diary she kept during this time, a record of her writing process and her day-to-day thoughts, particularly those she felt were affected by depression.

From her solitary home, she recounts the cycles of life and death, as well as the beauty of growth, as they all occur in her beloved garden, flowers and sometimes animals. She always strongly feels the underlying connection of the natural world to herself and her loved ones.

Despite her lingering sadness and fear of the future, she remains open to so much, including learning from her surroundings and the lessons nature can impress:

“Keep busy with survival. Imitate the trees. Learn to lose in order to recover, and remember that nothing stays the same for long, not even pain, psychic pain. Sit it out. Let it all pass. Let it go.”

It’s not a light, uplifting thing to read, but it’s very meaningful. As a writer, she celebrates creativity and the lengths one sometimes has to go to create, and that’s always something wonderful to read.

Sarton struggled with depression openly, and that was something else I appreciated in this diary’s writing. “The value of solitude – one of its values – is, of course, that there is nothing to cushion against attacks from within, just as there is nothing to help balance at times of particular stress or depression.”

She needs the solitude of the cottage for her work and her mental state, even if it means toughing it out through a harsh winter, even knowing that being alone will worsen her feeling of isolation and heightened awareness of mortality. “It occurs to me that boredom and panic are the two devils the solitary must combat. When I lay down this afternoon, I could not rest, and finally got up because I was in a sweat of panic, panic for no definable reason, a panic of solitude, I presume.”

Sometimes what you need is also painful. Even doing the right things for yourself can be a struggle of its own. And looking inward is always hard, and comes with a lot of risk. I found the whole endeavor to be very brave psychologically.

Despite tackling such heavy subject matter, even in diary form Sarton has a natural, graceful way with words.

I didn’t love the book, but I think it’s because her melancholy hit me too heavily, too oppressively, at a hard time in my own life. There’s no way to read a book except personally, so that was my connection with the material. Maybe coming from a lighter perspective, it would be easier to focus on the positive instead of the gloomy.

I’m glad I read it though – there’s sympathy here, understanding and acceptance. Voyeuristically reading her thoughts and musings is strangely calming and reassuring. I see why this book, and her other journals, have endured the test of time as well as they have.

And I can see how it would speak helpfully to many, especially those facing the same life issues and internal, mental struggles she was when she wrote it. Plus it’s studded with absolute gems of beautiful, wonderfully understandable philosophical writing: “Suffering often feels like failure, but it is actually the door into growth. And growth does not cease to be painful at any age.”

We are terribly frightened of admitting that we have been wrong, of admitting weakness, yet only when we can does the light flow in like a pardon…I feel renewed by having gone down into Hell, the Hell of self-hatred, the Hell of war with a person whom I love, and come back to the Heaven of self-forgiveness, as well as forgiveness of the other because in the struggle between us, if we can face it, the truth is concealed, and could be revealed.

Sarton forces us to confront and consider weighty personal, internal topics, but we’re surely left at least a little bit stronger for having done so with her eloquently written guidance.

Journal of a Solitude
by May Sarton
published 1973

3 thoughts on “The Complicated Necessity of Solitude”