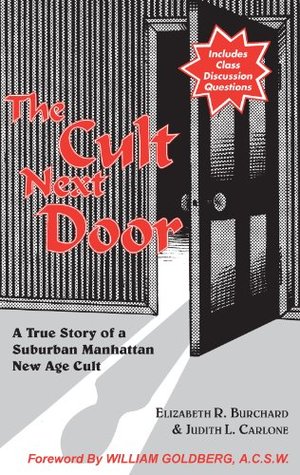 Book review: The Cult Next Door, by Elizabeth Burchard
Amazon

When cults make the news, it’s often because they’ve done something awful on a compound somewhere, or in the jungles of Guyana. This memoir shows the mesmerizing power of a cult close to home, one that forms in the heart of a major metropolis, in one of Manhattan’s poshest neighborhoods, and for decades ensnared members in a cycle of brainwashing, dependence and abuse.

It’s not a perfect read, and the cover is ghastly, but it has redeeming qualities.

In 1977, Elizabeth Burchard’s mother initiated their involvement in the cult, run by the “biofeedback” technician practicing in her psychologist’s office on Manhattan’s Upper East Side. He was charismatic, effectively winning their trust and appreciation, and soon they’d left the therapist’s practice and allowed the man, called George here, to run semiweekly meetings from Elizabeth’s mother’s apartment.

Elizabeth tells her story of living under George’s exacting control. As mind-boggling as her participation seems, having graduated from prestigious Swarthmore College and coming as she does from a wealthy background (she inherited a small fortune upon her father’s passing and her mother was a highly educated professional), Elizabeth shows some of the reasons and thinking that led her to fall under George’s control and participate in horribly abusive “group therapy” sessions, which included creepy, heinous sex abuse and extensive verbal and mental abuses.

George believes he’s a Messiah and tries to resurrect his family’s dog when it dies. For years, he tries to resurrect a dead dog. He espouses a theory of “Energy” that he generates by head shaking and transmits to his followers, so they depend on him for this strength and power to accomplish things in their own lives. These personal lives consist mainly of working whatever day jobs they have in order to turn over checks, sometimes entire paychecks, of massive amounts of money to him as payment for his preaching insanity at and raping them.

He eventually taps into politics in an attempt to spread his beliefs and recruit followers, with Elizabeth and her fellow members campaigning first for Ross Perot and later for local government in New Jersey.

Elizabeth details the vulnerability that made her open and susceptible to this kind of mind control and indoctrination. Her mother was aloof and sometimes cruel, her father died when she was young, and despite her strong academic abilities, she seemed lost and searched for the love that was absent from her family. She makes it clear that despite his repulsive behavior, George was so narcissistic and authoritatively commanding that attention from him felt very significant. He explains that he never gives gifts because “I am the gift.” So we see a little of how those who were vulnerable were brainwashed into thinking he was unusually special and they were lucky to be close to him at all.

She also writes that he “loved to paint the bullseye around the arrow,” ascribing his efforts to whatever outcome he’s dealt and berating and blaming his believers for their lack of dedication or effort if there’s failure. That way he’s never wrong in their eyes. This seems typical from what I’ve read of culty types.

I also had to roll my eyes that he eventually began calling himself a “Reverend” (of the Universal Church of Life for People, Plants, and Animals.) Like Richard Wayne Gary Wayne!

Elizabeth’s escape was eventually facilitated with the help of a new friend, Judith Carlone, who contributes a few chapters herself, explaining what she saw and perceived of the cult and of Elizabeth’s odd behavior from her outsider’s perspective.

On Burchard’s website, I saw that it’s required reading at New York City’s John Jay College of Criminal Justice, which I think is fantastic. Like one review of The Hot One noted, author Carolyn Murnick inadvertently supplied excellent telltale traits of a stalker and predator in her description of her friend’s murderer, and this does the same for understanding cult initiation, abuse, and survivor psychology. There are clear examples of the kind of psychological manipulation used, sometimes scary in its simplicity, and the way language is twisted to the manipulator’s benefit.

And as Burchard writes, “Although most people will never experience ensnarement in a bona fide cult, the interpersonal interactions we all share are subject to the potential abuses of deception, power, and control.” So it’s useful.

I didn’t love the style. It’s clear Burchard is intelligent and a decent writer, but I kept reading because the story was so bizarre and intriguing (and I have a weird, powerful fascination with cult stories) not because the writing grabbed me. It’s somewhat rambling and the narrative focuses heavily on financial details and business transactions which could’ve been consolidated and quickly explained.

It was also a little frustrating when I tried to Google out more about the people and stories involved and realized what I’d suspected, the names used are pseudonyms. I’m sure she has her reasons for this, but it bothered me nonetheless. She writes that George was often published, and he even spoke and did controversial events and readings at New York City-area Barnes & Noble stores. I want to know more about that and I can’t find anything!

But it’s an interesting, quickly readable look at one woman’s experience and escape from a controlling sect with some helpful markers for recognizing manipulative tendencies and cult psychology. Especially useful for those studying this from a psychological perspective or trying to understand something about the machinations of manipulative, controlling relationships.

I received an advance copy of the new edition from the publisher for review.

4 thoughts on “Inside a Manhattan New Age Cult”