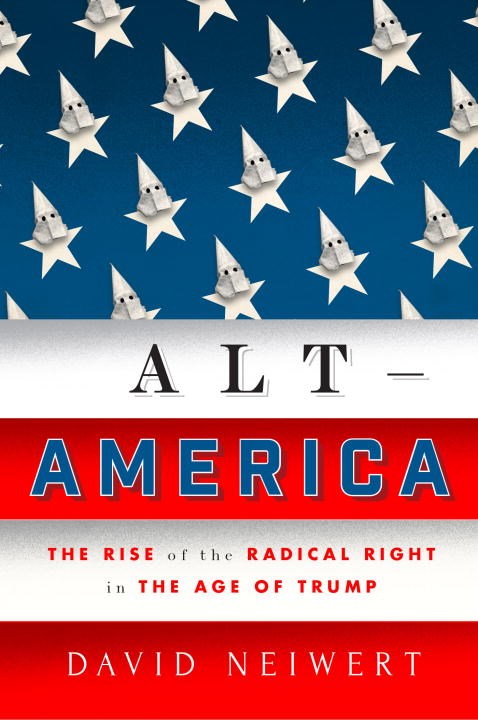 Alt-America is an alternative universe that has a powerful resemblance to our own, except that it’s Alt-America, the nation its residents have concocted and refigured in their imaginations. It is not the America where the rest of us live. In this other America suppositions take the place of facts, and conspiracy theories become concrete realities. Its citizens live alongside us in our universe, but their perception of that universe places them in a different world altogether, one scarcely recognizable to those outside it.

Some of these common beliefs include that Barack Obama is a Muslim conspiring with foreign powers and radical terrorists to impose sharia law on America; that Obama, Hillary Clinton and other mainstream politicians are under the control of a New World Order intending to enslave the world’s population and confiscate Americans’ guns in order to have no hindrance to their tyrannical dictatorship takeover; climate change is a hoax of said New World Order; “prejudice and oppression” against white people is a bigger threat than any bigotry against minorities; said minorities and illegal immigrants consume taxpayer money through welfare while homeless veterans starve.

That’s the tip of the iceberg, but these are some of their loudest and perhaps most recognizable beliefs. As unlikely or eyebrow-raising as some may sound, these ideas are very much entrenched in the belief system of this sector of America, and there’s a lot of anger and rage tied up in the ideology, which often gives vent in horrific ways, of which we’ve already seen far too many.

Another in a long list of books published in the aftermath of the 2016 presidential election analyzing the outcome and the perfect storm that caused it, journalist and prolific chronicler of right-wing extremism David Neiwert takes us back through some of the significant events of recent years, which read now like tea leaves clearly foretelling the rise of Trump.

This was not an overnight phenomenon. The dumpster Donald Trump’s campaign set on fire in the 2016 election had been slowly filling for many years.

Neiwert focuses on the strengthening throughout America of what most are referring to as the “alt-right”, but which many others are calling bluntly, “Nazis.” I happened to be reading an advance copy of this book over the weekend of August 11-13, which was when the Charlottesville white supremacist protests over the Robert E. Lee statue occurred and by the time the smoke cleared, three people were dead, one of them intentionally murdered.

It was extraordinary to me, and yet it wasn’t extraordinary at all. This book had already gone to print and it keeps happening, the situation keeps escalating, the incidents keep occurring with a fresh one popping up in the news as the furor over a previous one dies out. It’s exhausting. I can’t think of another word for it.

I think regardless of when this went to publication, it was sadly always going to be incomplete, or made obsolete quickly. However, as a primer on the history and significant events that contributed to this faction’s rise and eventually their leadership under the likeminded “Emperor Trump,” it’s valuable and certainly contains a wealth of collected information.

So in that sense, this is an important book. Beginning with South Carolina teenager Dylann Roof’s racially-motivated massacre in an African-American church, the chapters lead up to Donald Trump and Co’s most recent gaffes and ham-fisted attempts at explaining themselves away from what’s obviously racism, nationalism, and general ignorance of what it means to be modern, forward-thinking leaders and administrators, especially with respect to racial tensions.

The chapter about Roof was one of the strongest. Neiwert details the incident as it was reported by survivors, plus information about how his thinking evolved. It was disturbing and upsetting, and I took a break from the book for some time after reading it, but it remains one of the strongest examples, for me, of what’s going on in the so-called “alt-right universe.”

Roof is a microcosm of this type of domestic terrorism, which Neiwert points out is rarely called out as such, tiptoed around by many politicians and media, as its practitioners murder and terrorize far more Americans than foreign terrorists are doing. The shooting of politician Gabby Giffords and other horrifying, headline-grabbing incidents are also covered in detail, focusing on the ideology that drove the attacks.

Particularly helpful was the focus on identifying and explaining certain memes or imagery co-opted by the alt-right, like their ubiquitous symbol Pepe the frog, and the background of one of the early symbols associated with the Tea Party, the Gadsden “Don’t tread on me” flag.

A large portion of the book covers the homegrown militia men and “minute men”, the Bundy Ranch types. That incident gets extensive coverage. It’s one new, scary thing I learned a lot about in this book – there are so many (so, so many) militias made out of disgruntled citizens banding together under alt-right ideology across the country. I don’t know how or why I’m surprised, but I am. Also scared.

By the summer of 2015, the alt-right was gaining significant momentum as an online movement. But it lacked a real leader – a charismatic political figure around whom it could finally coalesce, whom its members could devote their energies to electing to office. It was the perfect time for Donald Trump to come along.

So it was all leading up to that, obviously. The chapters about Trump were quite good, and I liked the many instances where Neiwert highlighted Trump’s beloved tendency to “dance away” from issues he doesn’t want to discuss, particularly those strongly affiliated with his alt-right supporters. Reading them laid out here in narrative form was striking. I mean, we already know how he handles them, but Neiwert retells the incidents effectively.

Unfortunately, there’s just not a lot that’s new here. If you’re any kind of regular news consumer, most of this has received plenty of air time. His analysis is often helpful in understanding certain developments, but in other sections I found myself bogged down in too much information and reporting-style storytelling, or boring blow-by-blows of things like the Bundy ranch ordeal. As much as I’ve been craving commentary on the state of government, political parties, and race relations in America over the past year, this felt more like collected information and rehashed news stories than something fresh or enlightening.

Not that any of it isn’t important – it absolutely is, and despite Neiwert’s call for empathy in conclusion, I don’t think that’s what the far right wants at all. As we see here in example after example, the divide has grown so huge and so unhinged, so purposely severed from reality and facts that I have no idea how it’s ever going to be bridged. Neiwert seems optimistic, but nothing I read here made me feel the same way.

Alt-America: The Rise of the Radical Right in the Age of Trump
by David Neiwert
published October 17, 2017 by Verso (Random House)

I received an advance copy from the publisher for unbiased review.

I’ve included affiliate links from Book Depository, a great site offering free worldwide shipping.
It means I get a small commission (at no extra expense to you) if you buy via these links.
I’m never paid to promote or review any title.

11 thoughts on “Revisiting the Roots of the Alt-Right”