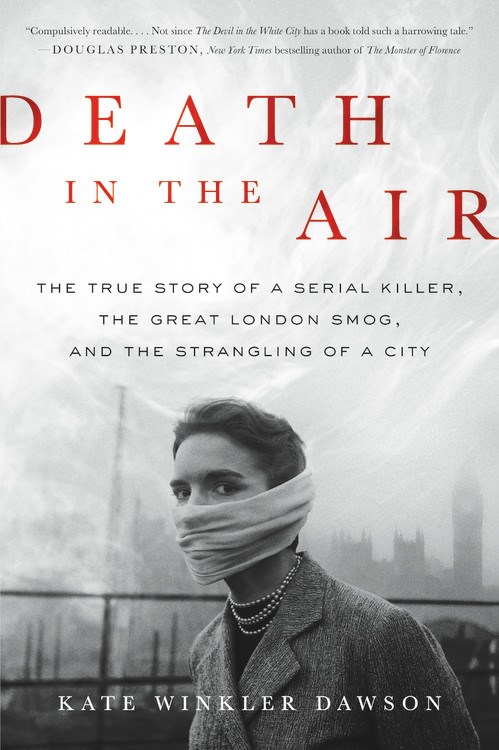 In 1952, two killers stalked postwar London. One was a serial killer: an average-looking, mostly unremarkable, middle-aged invoice clerk operating out of a grungy, now-notorious apartment building; the other was far more insidious and claimed many more victims: a suffocating, polluting smog that killed around 12,000 people. Maybe you can guess which got more media attention.

Kate Winkler Dawson’s new history “braids” these two stories together, despite their not being explicitly connected. This didn’t bother me, I saw enough of a fascinating connection in the sensationalized obsession the public and media immediately developed with the murderer, John Reginald Christie, and the mistruths and general lack of importance given to the air pollution that claimed more lives than Christie and heaps of other serial killers combined, yet which got significantly less coverage with less accuracy than Christie’s crimes. This seemed hard to believe, but it was true. And, surprise, money and politics were to blame:

The braided narrative reveals something about the way in which humans experience fear: one man was more terrifying to Londoners than a deadly fog that strangled thousands – a naïveté that only benefited newspaper editors (promoting their salacious headlines) and the politicians who tried to cover up the choking smog that was largely of their own creation.

Dawson alternates between the two stories, which keeps the narrative and pacing interesting. First, the progression of the December fog coupled with the efforts of some politicians to address its primary cause: a cheap fuel called “nutty slack,” comprising small coal lumps and coal dust, sold freely and abundantly in then-rationed London, which when combined with cold weather conditions, an anticyclone, and lack of wind created the smog that blanketed the city. Londoners were already used to the heavy fog they called a “peasouper: thick, drab, yellow, disgusting”, but clearly this was something far worse. The combination of weather conditions is described along with those politicians trying to downplay the severity of the issue for their own purposes.

Then chapters switch to Christie – his home life, extramarital dalliances, and the narrative and frightening escalation of his crimes, which reached their frenzied peak loosely around the same time of the Great Smog.

I saw some dissatisfied reviews complaining that the stories didn’t connect as expected. Maybe the impression was that the serial killer used the cover and chaos of the fog to commit his crimes when that wasn’t the case. A book like this will inevitably be compared to Erik Larson’s Devil in the White City, which I know I’ve mentioned I’m not a fan of, and maybe that one is a somewhat (somewhat!) better example of two events tied to each other, but not by much. And I think Dawson’s coverage of an historical air pollution killer quite timely, considering current global struggles with and conspiracies about climate change.

What was most interesting in Dawson’s choice of these two “stranglers” to profile was the legislative changes they both directly brought about. In Christie’s case, one of the bigger mysteries covered here is whether he murdered two neighbors, a woman and child, Beryl and Geraldine Evans. Beryl’s husband Tim was executed for the murders. Evans told bizarre and changing stories, likely affected by his own confusion, fear, and low intelligence level, but the stories always at some point implicated Christie’s involvement in one way or another. Christie testified for the prosecution and Evans was hanged, though he vacillated on what he’d actually done.

But after the discovery of six bodies on the property, to which Christie confessed his responsibility, the Evans case was reexamined. Christie claimed he didn’t know whether he’d killed them. The uncertainty of the whole situation led to the abolition of the death penalty.

With the fog, major change comes from MP Norman Dodds, whose efforts to attack the air pollution problem politically and legislatively eventually helped bring about the passing of the 1956 Clean Air Act, a comprehensive and pivotal bill that set a model for antipollution legislation.

Although some of the weather-heavy chapters were a little dry reading, I did learn a lot and as I said, it’s relevant now as much as then. More interesting from these sections was how much I learned about the infamous London fog, which of course I recognize from films and literature, but didn’t understand at all until this book. It was more intense than anything I’d consider fog, and suddenly every reference I’d seen took on new meaning.

Deadly fog was the muse for famed Victorian authors. They harnessed it as a literary device, symbolizing confusion and claustrophobia coupled with oppression and the blurring of roles in society.

Each chapter opens with a quote from such authors, including Charles Dickens, Robert Louis Stevenson, and my favorite poet (and a poem I’ll never read the same after this book), T.S. Eliot. His evocative imagery from “The Love Song of J. Alfred Prufrock” includes this well-known catlike depiction of the fog, used as a chapter prelude here:

The yellow fog that rubs its back upon the windowpanes
The yellow smoke that rubs its muzzle on the windowpanes
Licked its tongue into the corners of the evening
Lingered upon the pools that stand in drains,
Let fall upon its back the soot that falls from chimneys,
Slipped by the terrace, made a sudden leap,
And seeing that it was a soft October night
Curled once about the house, and fell asleep.

That “yellow smoke that slides along the street” will forever be more evocative and sinister, less playful and dreamy in my mind after reading this.

Dawson has written a compelling and readable history of two historically impacting events while demonstrating something infinitely interesting in a social sense – what society considers to be more threatening and attention-worthy. I’m not surprised by any of it, but I love her presentation and engaging writing.

In 1953 London, the story of John Reginald Christie and the eight bodies found at 10 Rillington Place enthralled a public fascinated with grisly crimes. And it offered valuable and disturbing lessons about the legal system. But of the two killers, society may be better served to heed the lessons of the Great Smog – and remember its estimated twelve thousand victims, along with the millions of people who have suffered since.

Death in the Air:
The True Story of a Serial Killer, the Great London Smog,
and the Strangling of a City
by Kate Winkler Dawson
published October 17, 2017 by Hachette