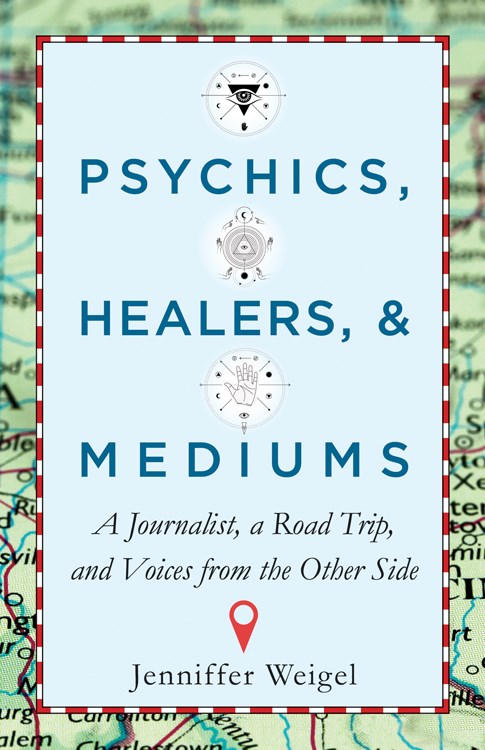 It’s Halloween! Time for a ghosty post! I haven’t read much recently that’s Halloween-applicable, but as a favorite spooky read, I recommend Colin Dickey’s scary but skeptical Ghostland. Now for the less skeptical…

Jenniffer Weigel is a Chicago Tribune columnist, radio host, and reporter who’s already written about her attempts to contact her father after his death, and her interest in spirituality and the afterlife. In this, her latest book, she describes getting readings from a variety of mediums employing different techniques and abilities, ostensibly to find objective proof of their abilities.

Each chapter explores the methods and background of a different medium, each practitioner with their own specialization. She always brings an anonymous plus-one to the meeting, to allay objections about the psychics simply Googling her beforehand, thus getting everything they need to deliver an impressive reading.

I’m not trying to force my beliefs onto anyone else. I’m just sharing exactly what happened to me with each encounter so people can draw their own conclusions.

As you…perhaps come across stories that might seem too strange for your current belief system to embrace, remember this: The dropping of nuclear bombs was a spectator sport in the deserts of Nevada back in the 1950s. We do what we think is best based on the knowledge we have at the time. Asking questions and gathering information is the only way to expand our consciousness.

Revelations and significant moments are punctuated with a bold-typed, “Shit!”, “Dammit!”, “That’s weird!” “You can’t Google that!” or “Was this what the crow was trying to warn us about?” Unintentionally funny, but also groan. It’s lazy writing and not objective journalism.

The book is marketed using Weigel’s journalistic credentials, purporting objectivity and honest exploration as the foundation. But that’s not really the case. She is a journalist, but might as well not be for this book – her career has nothing to do with how these incidents are told.

Although she shares the opinions of the practitioners themselves about skeptics, and acknowledges that she receives a lot of emails asking her to stop indulging these frauds, she doesn’t present much contradictory evidence or research. There’s not much there to disprove or provide counterbalancing viewpoints. No mention of well-known cold reading techniques or the possibility of “hot readings”, like placing microphones in venues, at all.

Several times, mediums mention that their work is meant to be accepted by those who find it useful or ideally, healing, and let go by the rest. It’s kind of like the Alcoholics Anonymous motto, “take what you need and leave the rest.” But I’m troubled by the accusations that many who claim to be psychically gifted are actually just gifted in manipulation and con artistry, and they take advantage of the grieving.

At one reading, Weigel sits next to a woman who lost a young son, hoping he comes through to the medium they’re seeing. She tells Weigel that she’d seen famous TV psychic John Edward when he was starting out and giving readings at home for 75 bucks. Weigel doesn’t include any followup. It seemed like the perfect opportunity to address one of the most famous but also infamously controversial psychics/mediums.

Or this disturbing tidbit, about “Manhattan Medium” Thomas John: “While some of his religious family members still mail him Bibles in the hopes of helping him to avoid ‘burning in hell,’ he now has clients all over the world, including celebrities such as Courteney Cox and Jenny McCarthy.”

I don’t think mentioning a client who’s a dangerous anti-vaxxer is something to brag about.

Paul Selig, a former NYU professor, is a channeler: a clairvoyant who mysteriously adopts physical characteristics of the people clients ask about. This tantalizing information wasn’t followed up in sufficient detail, only an affirmation that he channeled characteristics of Weigel’s mother during a reading.

He was the most interesting to me, coming as he does from an academic background. He hid his side work from his academic colleagues for a long time out of fear of their skepticism. What a missed opportunity for journalistic exploration. Even with some biographical info about each medium, the book never digs too deeply. It’s more about the readings – nothing scientific, little research.

This is the second book I’ve read on the paranormal and the ability to communicate with the other side, and I think it’ll be the last. I admit I’m a skeptic but I guess I don’t want to be. I cling to eerie, impossible-seeming stories of sights, experiences, or readings had by people I trust, and I’d love to believe that it’s not over when it’s over. Not because I want to live forever (NO THANKS) but because I’m devastated by loss, and lack of time with passed family. I want to communicate with them again.

I wish that Colin Dickey of the aforementioned excellent Ghostland would tackle this topic. He’s more cautious about his beliefs and has a gift for research that he applied beautifully to famous American ghost stories and haunted places in that book, and I think this topic could use the same treatment. It doesn’t necessarily mean it’s all bunk, but it needs balance.

I did like that one of the psychics mentioned that you’ll only be unhappy as long as you’re avoiding your calling in life, whether you’re ready to accept it or not. So if you’re working at some shitty job but dreaming of pursuing your art, you can expect to be frustrated and coming up short in a lot of ways until you accept where you should be. That was a helpful message, but I don’t think it takes any special intuition or guidance from the other side to figure it out, just the right words to form it.

“It’s just my job to offer what has worked for me, and maybe it will work for them and, if not, then so be it,” one intuitive tells Weigel. Like I said when reviewing Surviving Death earlier this year, I guess I’m not the right audience for these books because none of it works for me, much as I’d like to find something that makes sense or gives reassurance in some way.

Have you read anything interesting or more journalistic/objective, less emotion-based on this topic? I’m still curious, I just don’t want to read anything else woo woo.

Psychics, Healers & Mediums:
A Journalist, a Road Trip, and Voices From the Other Side
by Jenniffer Weigel
published April 1, 2017 by Hampton Roads Publishing

I’ve included affiliate links from Book Depository, a great site offering free worldwide shipping.
It means I get a small commission (at no extra expense to you) if you buy via these links.
I’m never paid to promote or review any title.

One thought on “Conversations About the Other Side”