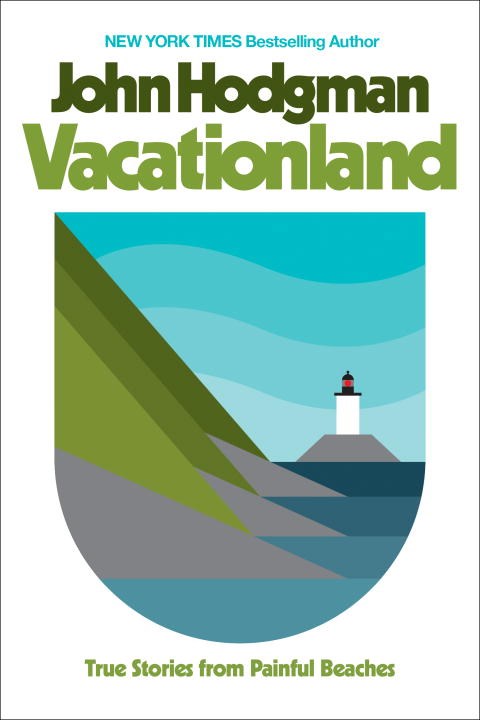 “Nobody knows,” I said, meaning at least one person does not know, and that person is me.

I didn’t know anything about John Hodgman (comedian, author, Daily Show and This American Life contributor, podcaster) at all before I picked up his most recent book, a collection of essayish memoirs, Vacationland. I came to it without any preconceptions about him or his material and finished the book a solid fan. (I only read it, by the way, not otherwise being interested in him specifically or in the general life musings of a middle-aged man, after reading a review saying it’s very funny, and I felt like I needed something funny this week. If you need something funny too, this is it.)

Vacationland isn’t easy to summarize. Basically, Hodgman explores life events like parenting, home ownership, and the unique oddities and natural beauty of New England, specifically his native Massachusetts and his wife’s Maine. These come alongside more serious topics like his mother’s death from lung cancer and the middle-age standbys of existential angst, aging, grownup responsibilities, financial security, and general anxiety.

He writes in a chatty style that’s literary too. It reminded me of other great essay writers with that balance of silly and serious like the genre master David Sedaris or Hollis Gillespie, an underrated essayist and humorist who wrote on similar topics as Hodgman. The concept for the book came from his standup and it’s clear in the joke-filled storytelling style, but unlike some other comedians, his spoken stories translate perfectly to the page.

The writing is smart, the stories and their threads are beautifully connected – like life, they’re ugly and funny and sad and scary and sweet all at once. Much of it struck me personally despite my not sharing much with Hodgman, like a gender, or being a parent or middle-aged, or owning a home. We only really share race, and the awareness of white privilege and what it entails, what that means to him, is also a topic that I thought he handled very well here. I was actually pleasantly surprised at how he covered it. But there’s something special about an author’s storytelling ability when they can speak to a reader who shares so little of general traits or life experience with them when they’re writing so personally about exactly that.

I always like reflective writing that’s equally adept at joking as at making thoughtful points about serious topics. Hodgman strikes the perfect balance with both. I laughed a lot, and the more poignant, bittersweet moments resonated. Like here, as he considers a song lyric from an Appalachian hill song (I’ll let you find out how he came to hear it): “All I know is it’s a pity / Life can’t be simple again.”

It is a consuming knowledge, an overwhelming sadness for what is lost that makes enjoyment of the present impossible. Now normally I consider nostalgia to be a toxic impulse. It is the twinned, yearning delusion that (a) the past was better (it wasn’t) and (b) it can be recaptured (it can’t) and that leads at best to bad art, movie versions of old TV shows, and sad dads watching Fox News. At worst it leads to revisionist, extremist politics, fundamentalist terrorism, and the victory – in Appalachia in particular – of a narcissist Manhattan cartoon maybe-millionaire and cramped-up city creep who, if he ever did go up to Rocky Top in real life, would never come down again.

(“Cramped-up” is in reference to a metaphor about ducks in the same Appalachian hill song. Just read it.)

In addition to the big topics, he covers all kinds of quirky, unique things that pop up through his days and his stories, like the evolutionary purpose of the mustache, a graveyard-exploring father-daughter hobby, and cairns and whether or not they’re governed by specific and important laws. It’s charming and light and entertaining while still being smart.

The book’s highlight is the vivid, lively portraits of Maine (the so-called Vacationland, despite its painful beaches) and Massachusetts, perfectly capturing the prickly New England personality and why it might be that way, and particular nuances of both locations. That was my favorite topic here, the personality differences in these two states and how he initially perceived his place or reception in one or the other, and the evolution over time. I’d read a whole book of his writings on being an outside-insider in New England.

As a con, the book sometimes danced away fairly quickly before going too deep on particular topics, and elsewhere I felt some strange secondhand anxiety reading about adult problems, like how living in a big city lets you delay or escape confronting certain facets of adulthood. So that’s obviously for personal reasons, maybe someone else wouldn’t be bothered, and it doesn’t detract from the book overall, but worth mentioning.

Sweet, sentimental, poignant pieces on life and the living of it, growing up and older and hopefully wiser, and the importance of exploring and staying curious while navigating wilderness in whatever form you find it.
My rating: 4.5/5