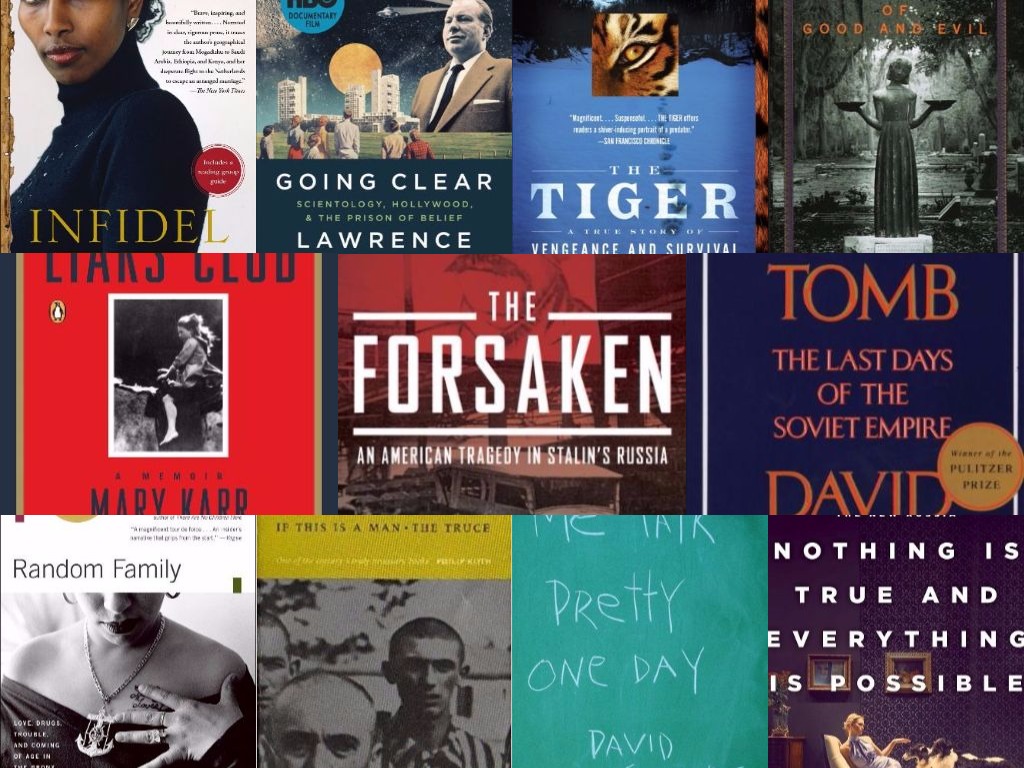 It’s #NonfictionNovember this month, with different sites hosting different topics each week to post about, all celebrating and exploring great nonfiction. I considered participating earlier, but it’s always nonfiction day/week/month in my life and it was easier to just write reviews as usual instead of thinking about topics or lists. I’m lazy at the moment.

But this week had such a great topic. The prompt, hosted by Katie at Doing Dewey:

Nonfiction Favorites: We’ve talked about how you pick nonfiction books in previous years, but this week I’m excited to talk about what makes a book you’ve read one of your favorites. Is the topic pretty much all that matters? Are there particular ways a story can be told or particular writing styles that you love? Do you look for a light, humorous approach or do you prefer a more serious tone? Let us know what qualities make you add a nonfiction book to your list of favorites.

For me, good storytelling is key. That might be the biggest element that takes a book from good to great in my opinion. I feel like I’m always trying to convince people that nonfiction can be as compelling and beautifully written as fiction, and often that comes down to storytelling. If an author has both an interesting topic and is able to weave a strong, well-written narrative thread around it, I’m in.

As for topic, I have my favorites (Russia, memoirs of people doing extraordinary things, tales of cults and/or religious extremism, WWII stories, coming-of-age memoirs, women’s issues, essay collections) but I’ll read narrative nonfiction on almost any subject. It all comes down to the story and the writing. I love being surprised by a topic and drawn into it because of compelling writing and good research.

And I love books that satisfy curiosity, and allow me to learn something without being dry. Especially personal stories, or ones that makes me think about a subject, place, or situation that I don’t know much about or maybe wouldn’t have readily encountered elsewhere.

So, kind of with another topic in mind that was also making the rounds this week, I picked ten nonfiction reads (ok, with some add-ons) that I’m grateful for. These all greatly moved me or changed my thinking in one way or another, they were all eye-opening, and they hit all the points I mentioned above. I can’t say it’s my ten favorites, because I couldn’t limit that so much (even with the extras) but these stand out specially for various reasons.

The Tiger: A True Story of Vengeance and Survival, by John Vaillant – I recommend this book over and over even if people look at me sideways for it. If you’re on the fence about nonfiction, this might be a read for you. It’s a page-turning story of a tiger that begins attacking villagers in remotest Siberia, seemingly if surprisingly triggered as an act of revenge, and the team that has to track down the protected animal. It’s also a cultural and economic look at Siberia, poaching, Russian and Soviet history, biology and nature, and a million other things. The writing and story gave me chills, and it’s an amazing suspense/thriller story on top of everything else. I could talk about this book until I’m blue in the face, I love it so much. (Book Depository)

The Forsaken: An American Tragedy in Stalin’s Russia, by Tim Tzouliadis – I’ll read almost anything about Russia. It’s hard to even pick favorites in this category (this is nevertheless a pretty Russia-heavy list, hope you like that.) But this one is up there. It’s a little-known story about the Americans who were lured to the Soviet Union in the 1930s, influenced by propaganda leading them to believe the answer to Depression-era problems were the plentiful jobs of Communism. You can imagine where this is going, as Stalin kicked the Terror into high gear and foreigners came under even greater suspicion than usual. It’s an unbelievable but true story and so well-written. (Book Depository)

Random Family: Love, Drugs, Trouble, and Coming of Age in the Bronx, by Adrian Nicole LeBlanc – This is one of those books I never imagined I’d love like I did. LeBlanc immersed in an extended family in the Bronx, particularly two couples – a drug dealer called Boy George and his girlfriend Jessica, and Jessica’s younger brother Cesar and his girlfriend Coco – and followed their lives with all the intensity that entails, including imprisonment, poverty, murder, drug dealing – this is the tip of the iceberg. It’s a hard one to explain and do justice to, but I think it’s a must-read. Tough, gritty topics but the writing is exceptional, so I felt like I learned so much more about these things than possible elsewhere. (Book Depository)

Going Clear: Scientology, Hollywood, and the Prison of Belief by Lawrence Wright – You’ll forever cross the street to avoid anyone peddling copies of Dianetics after reading this journalistic exploration of the roots of Scientology and its creepy crazy founder, L. Ron Hubbard. Wright is an incredible journalist; his earlier book The Looming Tower: Al-Qaeda and the Road to 9/11 is similarly fantastic. And can we admire for a moment that he’s written in-depth about both Scientology, one of the scarier and more aggressive and litigious cults out there, AND radical Islam? He is fearless. (Book Depository)

Me Talk Pretty One Day, by David Sedaris – Maybe his most famous book for a reason. Essay collection of his personal stories of family and France that still after many years and many reads moves me so deeply (and it’s hilarious.) I love it forever. He’s a one-of-a-kind storyteller. (Book Depository)

Infidel, by Ayaan Hirsi Ali – Ali fled an arranged marriage and unstable environments in multiple countries, landing in the Netherlands. She begins telling her life story in this, the first of her several memoirs, and describes how she came close to being initiated into extremism. Her story took a different turn, and she worked her way up to becoming a Dutch politician before her outspokenness against Islamic fundamentalism led to the murder of a filmmaker she’d collaborated with, death threats, and her eventual relocation to America. Her life is heartbreaking but hopeful, her drive is astounding, and she’s so smart. She writes like a dream to boot, and I learn so much from her work. (Book Depository)

Midnight in the Garden of Good and Evil by John Berendt – I’m not a big re-reader, but I read this in my teens and was enamored with it (I borrowed it from my grandmother’s shelves, she loved reading about secrets and scandals of the Deep South.) I happened upon a copy of it left behind while working an on-location project a few years ago and started leafing through, only to read the whole thing again and be charmed all over. I think sometimes I don’t want to re-read things because I’m afraid they won’t live up to how I feel about them in memory, but this book completely did and then some. Berendt lets the characters and stories of Savannah speak for themselves in an excellent work of true crime and cultural journalism. The story and writing are mesmerizing. (Book Depository)

Lenin’s Tomb: The Last Days of the Soviet Empire, by David Remnick – The New Yorker editor’s powerful work of journalism, eyewitnessing the crumbling of the Soviet Union, is as much about culture and shifting attitudes as it is about politics and power. I always feel like I can’t mention it without mentioning the more recent Nothing is True and Everything is Possible: The Surreal Heart of the New Russia. I think these two books go together so well. The latter is British TV producer Peter Pomerantsev’s story of working within the modern Russian reality TV dictatorship, and he relates several well-known, or maybe not so well-known, episodes from the country’s recent history. (Book Depository)

If This Is a Man / The Truce, by Primo Levi – These twin memoirs of an Italian chemist about his time, experiences, and thoughts in Auschwitz and after are also known by the titles Survival in Auschwitz and The Reawakening. Primo Levi is such a beautiful writer, even translated into English. Reading him is a wonderful experience – he’s thoughtful, philosophical, honest and intelligent. He’s one of those rare authors that when you’re reading their writing, you wish you could have a conversation with them. The Drowned and the Saved, Moments of Reprieve, and The Periodic Table are all excellent too. He left the world a gift with his books. (Book Depository)

The Liars’ Club, by Mary Karr – The first of Karr’s memoirs and a classic of the genre for good reason. She changed the whole genre with this book, really. She writes in turns both sad and humorous about her childhood and dysfunctional family in Texas, and her writing is really something special. It’s poetic, poignant, hilarious and powerful, all while seeming completely effortless. (Book Depository)

Have you read any of these? What are your favorite nonfiction reads?

9 thoughts on “Nonfiction Favorites for #NonfictionNovember”