I am not a victim, and I do not want anyone’s sympathy. I wrote this book to help others who have suffered from similar experiences, whether in the FLDS church, or in thrall to some other circumstance beyond their control. I want people to know that it is possible not only to overcome their trials but also to use those difficult experiences to help others. No matter where you came from or what you’ve been through, we are all in this together.

Rachel Jeffs is the third of Warren Jeffs’ many dozens of children. Jeffs is the leader of the Fundamentalist Latter Day Saints church/cult, even though he remains in prison for rape, marrying underage girls, and ordering his followers to do the same. He still controls the sect from behind prison walls, as Rachel shows here to horrifying effect.

He was on the FBI’s Most Wanted list before his apprehension, and even during that period, while on the run, he exacted total control over his followers, who believe him to be a Prophet. Because of that exalted status, his disgusting behavior and controlling actions are generally accepted without question.

As if marrying underage girls, sometimes to relatives, and facilitating such unions amongst the group wasn’t enough, Jeffs has also been accused of molesting and raping children, including his own or close relatives. Two of his children have already come forward alleging similar abuses.

Rachel, who fled the sect in 2015, writes her confessional memoir beginning with her childhood, when her father molested her and used the abuses as punishments in the guise of “teaching” her. He went on to manipulate her throughout her life in various ways connected to the abuse. What she demonstrates here over and over is what a master manipulator he is, especially when he claims divine connection and his followers blindly buy it. This is such scary stuff and no matter how many of these cult stories I read, I guess I’ll always find it difficult to believe that they exist, committing such human rights offenses, in the US. It’s sickening.

Some passages of the book are so stomach-turning, they’re hard to get through. It makes it all the more commendable that Rachel wrote this. She’s starkly confessional about what happened to her, which for years she didn’t reveal to anyone. When she did, confessing to both her mother and her husband, their initial shock, disgust, and some sense of outrage on Rachel’s behalf was quickly paved over with dedication to Warren and his leadership as the “Prophet”. Even when confronted with the abuses, he talks his way out of it, presumably playing the prophet card. Barf. This poor girl.

Rachel goes on to detail her own marriage, arranged by her father when she was eighteen, making her much luckier than some of her younger sisters or some of Jeffs’ own brides, who married as young as 12. Rachel wed on the same day, at the same ceremony as her sister Becky, and here’s what their pedophile father told them shortly before their marriages:

Just before we knelt for family prayer Father said, “Rachel and Becky, I want you to know that if I could marry you I would. That is how special you are to me. If you weren’t my daughters, you would be my wives.”
I’m very grateful that I am your daughter.

Luckily for her sanity, I suppose, Rachel gets along well with her husband, although there’s plenty of the typical sister wife drama that Carolyn Jessop describes in Escape, proving that their “plural marriage” system doesn’t work as well as they say it does. But Rachel becomes increasingly horrified at other practices and abuses within the community, including her father taking ever younger wives and his eventual life on the lam as he tries to outrun the Feds, while still performing a Machiavellian manipulation of his followers’ lives, homes, and families.

He shuffles them constantly from house to house, compound to compound, state to state, uprooting and separating families, banishing parents from their children for minor or imagined transgressions that he says Jesus told him about. Rachel notices that Jesus only seems to tell him about transgressions that were also witnessed and tattled to him by others in the community. Convenient.

As she becomes disillusioned, and particularly following his ordered separation from her five children, she began entertaining ideas of escape. After contacting family members outside the FLDS, she manages to get out, and the book ends shortly after she’s beginning a life in the outside (“Gentile”) world. I would’ve liked to read more about her adjustments, but beyond mentioning her new relationship with another ex-FLDS member, there’s not much from this period. She’s been out two years, so it’s very new.

It almost doesn’t feel fair to criticize this because I can’t imagine how hard it was to write, let alone live it. But I couldn’t completely enjoy the book because the writing and structure weren’t as strong as they should’ve been. It’s not credited as having a ghostwriter, and as much as I admire Rachel and what she’s accomplished against towering odds, followed by baring her most traumatic moments like this, it deserved a supporting writer to punch up the prose.

Occasionally she misses, or avoids, opportunities to explain more than she does. For example:

It seemed to me that if you have to hide something, it must be wrong. Because Father had so thoroughly convinced the people to keep their lives secret, the children were forbidden to tell their own truth, and now they were paying for it. The secrecy also caused the rest of the world to be suspicious, and many stories about our people were blown up by the media, or were often utterly untrue.

That seemed like a great opportunity to expound on what particular stories were exaggerated or false. Still, writing or narrative weakness aside, what Rachel reveals, about what she endured but overcame in the cult and her revelations since leaving, makes this worthwhile. I kept remembering the quote I mentioned in Carolyn Jessop’s FLDS memoir review (I know I need a break from these) about the Utah Attorney General saying part of the state is worse in terms of human rights than under the Taliban.

Rachel’s story is important because this is happening in America, every day, and even with her father imprisoned, he still manipulates his followers’ lives, to their great detriment.

One of Warren Jeffs’ child brides who also escaped told Rachel, “Sometimes we have to go through hell ourselves before we are humble enough to listen.” Rachel sums up her feelings towards family and friends within the cult, acknowledging that they’ll judge her apostasy as they’re taught to do, but offers them refuge: “To all my family still in the church, or cast out but afraid to reach out, you always have a home at my house.”

I’m so impressed by her.

Also, look at her before and after: 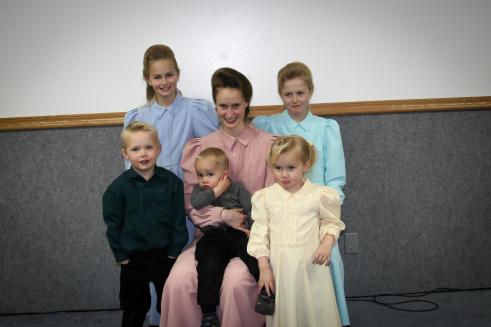 She finally looks her age. And so much lighter. Not just because of the bleach.

Bravo to her for writing this, for being forgiving and open-minded, and for welcoming others who find the strength to escape.

Looking at her social media, she seems to take a lot of joy in writing and I’m sure it’s therapeutic, so I hope her next works become more polished. Straightforward and conversational, a disturbing, revealing account of what life was like as the daughter of a notoriously abusive cult leader, and how she made a positive, free future for herself despite his best efforts.

Breaking Free:
How I Escaped Polygamy, the FLDS Cult, and My Father, Warren Jeffs
by Rachel Jeffs
published November 14, 2017 by Harper

4 thoughts on “The Prophet’s Daughter Tells Her Story”