I made a goal for myself this year to read fewer advance copies and more of what I’ve really been wanting to read myself. I love reading advances, don’t get me wrong, but they do sometimes keep me from getting to something I’d personally been in the mood for. It sounds odd, but it can be hard to fit in non-advance copies considering the necessary schedules for reviewing newly published books.

But I did read much more beyond new releases, and it made me really happy (it’s the little things.) I read so many good titles that had been lingering on my reading list, and I highly recommend doing it if you start to feel burnt out on or bored with advances or new releases.

In no particular order, some of the best things I read over the past year that weren’t published in 2017:

Nothing to Envy: Ordinary Lives in North Korea (Barbara Demick, December 29 2009) I’ve wanted to read it ever since it was a onetime David Sedaris speaking tour pick, and finally got around to this masterful work of narrative nonfiction. Structured as a group biography of several interconnected North Koreans who defected, it covers the harrowing details of their lives in Chongjin, a coastal city in Hamgyong Province, and what finally led them to question their country’s brainwashing and make a run for it. Stories that are unbelievable, yet unfortunately all too true, and captivating writing. The best thing I’ve read so far about North Korea. Amazon / Book Depository 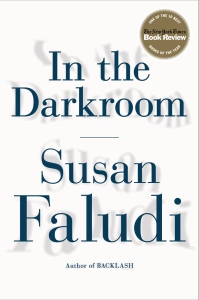 In the Darkroom (Susan Faludi, June 14 2016) This critical darling from last year is worth the hype. Pulitzer-winner Faludi writes of her strained relationship with her demanding, difficult father, especially after he returns to his native Hungary in his final years and undergoes sex reassignment surgery. Faludi has a gift for writing about identity, and she examines her father’s life and choices even as he tries to wiggle out of saying much. She learns about his connection to politically and culturally complicated Hungary, and uncovers larger truths and understandings about identity, gender, and nationality. Amazon / Book Depository 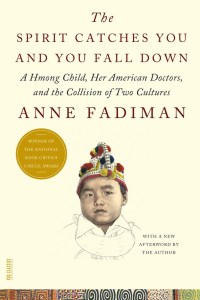 The Spirit Catches You and You Fall Down (Anne Fadiman, 1997) Medical treatment in terms of cultural sensitivity was redefined thanks to this narrative nonfiction classic about Lia Lee, a Hmong girl with epilepsy, and her refugee parents clashing with doctors over her care in Merced, California. Easy to see why it’s a classic in the genre – it’s touching, compelling, well-researched, endlessly thought-provoking, and masterfully written. Amazon / Book Depository 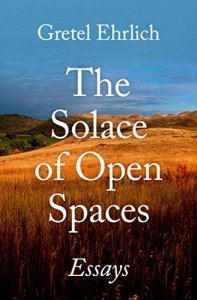 The Solace of Open Spaces: Essays (Gretel Ehrlich, 1984) This was technically rereleased this year in ebook format, but it’s originally from 1984. I’m so glad I read it and discovered Ehrlich’s writing. These essays were written from the wide open plains of Wyoming, where Ehrlich worked on ranches while grieving the loss of her partner. She muses on life, death, and the open spaces that allow her to think and evaluate in touching, poetic prose. A new all-time favorite. Amazon / Book Depository

Dinosaurs in the Attic (Douglas Preston, 1986) Armchair explorations through the exhibits and history of New York’s American Museum of Natural History. Fascinating, adventurous stories that give you so much more to think about than if you’d visited the museum any other way – or the opportunity to visit from a distance. Compellingly written and, Preston’s first book, it’s stood the test of time. Amazon / Book Depository

A Mountain of Crumbs (Elena Gorokhova, 2008) I fell in love with Gorokhova’s gorgeous writing in this intimate coming-of-age memoir of her early life in Leningrad, and her decision to immigrate to the United States, albeit not under the most ideal circumstances. I was always impressed with her strength and decisions, and awed by her way with words. As I wrote in my review, I think I learned more about life in Soviet Leningrad from her account than I have from history books addressing the same period. Amazon/ Book Depository

The Unspeakable: And Other Subjects of Discussion (Meghan Daum, 2014) Thoughtful, intelligent, and well written essay collection on topics from or related to Daum’s life, touching on often uneasy subjects without sentimentality, like her mother’s death and deciding not to have children. It was funny in parts without trying too hard, thought-provoking, and the writing was excellent – everything I love in essays. Amazon / Book Depository

The Language of Baklava (Diana Abu-Jaber, 2005) I recently discovered foodoirs, and in 2017 I read eight of them (too much? Surely no.) This was my favorite, a gorgeously written coming-of-age memoir of a girl with an American mother and a Jordanian father with a big personality. She winds together food, family, and differing cultures while telling stories of growing up in America and Jordan. Amazon / Book Depository

Putin Country: A Journey into the Real Russia (Anne Garrels, 2016) I was so interested in NPR reporter Garrels’ account of modern Russian life under Putin in industrial Chelyabinsk that I read this book entirely too fast. It’s worth another read. Garrels interviews people in different professions to get their takes on the country’s current state, and recounts her own experiences being followed and interrogated as a foreign reporter. Amazon / Book Depository 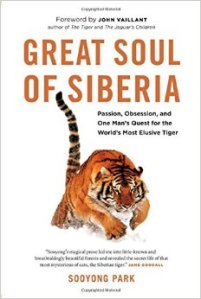 Great Soul of Siberia: Passion, Obsession, and One Man’s Quest for the World’s Most Elusive Tiger (Sooyong Park, 2015) I may have mentioned one or one thousand times how much I love John Vaillant’s The Tiger, and I’m weirdly jealous that I’ll never be able to read it for the first time again (is that weird?) This book is maybe the closest I can get to a similar topic (Vaillant wrote the intro, too!) It’s a wonderful natural history of the complex Siberian tiger that, like Vaillant’s, succeeds in letting us look much closer at a misunderstood animal. Park painstakingly stakes out to observe a mother and her cubs in their natural habitat, allowing a fascinating glimpse at how they live and how environmental and social factors are affecting them. Even in translation it’s a beautiful, moving read. Amazon / Book Depository

Did you tackle any reading backlog this year? What were your favorite new reading discoveries that weren’t published in 2017?