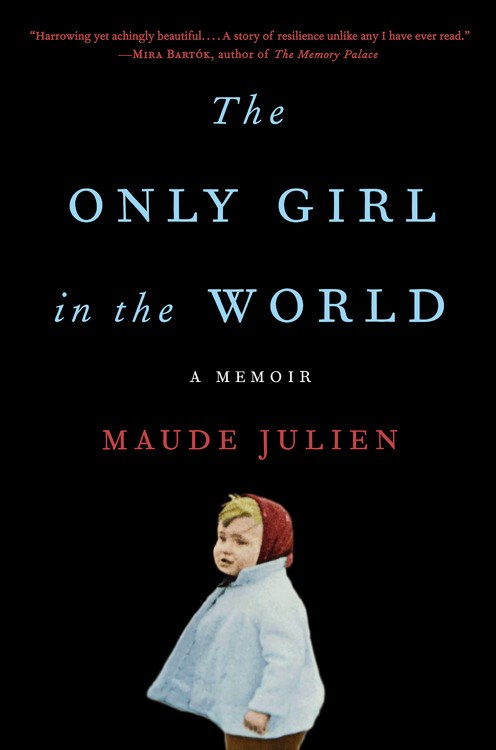 Book review: The Only Girl in the World, by Maude Julien (Amazon / Book Depository)

My father is convinced that the mind can achieve anything. Absolutely anything: it can overcome every danger and conquer every obstacle. But to do this requires long, rigorous training away from the impurities of this dirty world. He’s always saying, “Man is profoundly evil, the world is profoundly dangerous.”

This memoir, written by a French psychologist, is one that I wasn’t sure I wanted to read. In short, it’s fleshed-out scenes and remembrances from her childhood, in which she endured severe mental and physical abuses at the hands of her parents, particularly her father. He isolated, controlled, and “conditioned” her through bizarre experiments and “teachings” intended to shape her into a powerful superhuman, resistant to tortures or pains. It’s grim and ghastly.

That said, I’m so glad I decided to read it despite knowing that it might be tough. Even in translation from the French, the writing is gorgeous and engrossing. I almost missed my subway stop while reading it, something I’ve managed to proudly avoid nearly my whole life. That’s high praise.

Julien’s father, referred to as Monsieur Didier, was a Freemason, and also a partisan in the Second World War, which clearly influenced a lot of his beliefs and actions. One that struck particularly powerfully is his insistence that she master a catalogue of musical instruments. He tells her stories about concentration camp musicians, who were spared their lives for their ability to play. So she grows up associating musical ability as necessity – as is everything else in her world, really – instead of something to derive joy from.

But to go back a little – even her birth was painstakingly arranged by her father. He adopted her mother (it gets icky right from the start) as a child from a poor mining family and sent her to boarding school, then university, training her to be a teacher for the blonde-haired girl he always dreamed of bringing into the world and raising to be superhuman. Once he has his child, they move to an old mansion in a small town along the railroad tracks, somewhere near Saint-Omer in northern France. Maude isn’t allowed to leave the gates of this gloomy estate for over a decade.

Homeschooled (badly) with emphasis on a few subjects in particular that are deemed especially important, like Latin and German, Maude’s upbringing is incomparable to other children’s. She has little interaction with outside people, let alone other children, isn’t allowed to laugh or smile, barely allowed to wash (builds immunity), has to drink alcohol even as a child in order to become immune to its effects, is punished for even the mildest transgression, and never receives any physical affection from either parent.

In addition to her “education”, she and her mother have to serve her father, who emerges in the telling as a self-styled guru figure. As she puts in a reflection, “The ‘three-person family cult’ of my childhood displayed virtually all the characteristics of a religious cult.” Her mother isn’t quite as cold, but she inflicts her own psychological pains, thanks no doubt to her own suffering and lifetime of control by this man. She doesn’t object to much, allowing the implementing of these bizarre mental and physical tests based on what seems like a combination of Freemasonry principles, militaristic methods, and, disturbingly, some adaption of Nazi beliefs.

This isn’t even beginning to touch on the horrific “conditioning” abuses her father puts her through, including leaving her in a dark, locked cellar, wearing bells so they’ll hear if she moves, made to sit still and endure rats running around her while meditating on death. How do you even come back from having that place in your life? That’s why I was doubtful I wanted to read this.

But the strength Julien shows, not only in growing into an intelligent, self-assured person despite this monstrous childhood, but in being an affectionate, warmhearted, good person despite deprivation of those things when she needed them most, is why the good in this story infinitely outweighs the bad. Not to mention how she briefly describes her psychology work at the book’s conclusion:

In my practice, I often gather the shipwrecked victims of these enslaving relationships. They are sent to me by concerned loved ones or doctors. Some are considered hopeless cases, but I know deep down that there is always a way out. I often tell my patients that freedom can flow through anything.

In her case, she began developing her own identity, outside of her father’s control, by little acts of rebellion – sometimes openly defying him, stealing keys to explore forbidden parts of the house and finding unread books there, igniting further her love of literature, squirreling away paper to write stories that exercise her imagination and hiding them, throwing herself into her music studies, and deeply loving the animals she’s allowed to care for on the estate. This was also a touching element, and probably what allowed her to always feel capable of love and connection. I wanted to give her a million hugs so badly. Thanks to her preparations in these little but actually huge ways, she’s ready when an outside figure able to offer help crosses her path.

I’m so impressed with what she accomplished and what good she’s managed to bring into the world despite a beginning in life that no one deserves. This is so worth reading just for that reassurance of what humans are capable of.

My only complaint is that it ends abruptly as a new phase of her life begins, and I was left wondering how she’d adapted, what that transition was like.

There’s another lesson in it all too, where she gently reminds that you don’t know what’s behind another person’s hesitation, discomfort, or seemingly odd behavior: “It’s impossible to overstate how much a simple smile can change a life, and how one word or one aggressive look can darken the world.”

Not to give too much away, but I wanted to share the last words of the book, because I think after considering so much that’s dark and depressing, it helps to think of the light someone still managed to find, despite this treatment:

The Only Girl in the World: A Memoir
by Maude Julien, with Ursula Gauthier
translated by Adriana Hunter
published December 12, 2017 by Little, Brown
originally published in French in 2014

7 thoughts on “A Light in the Darkest Places”