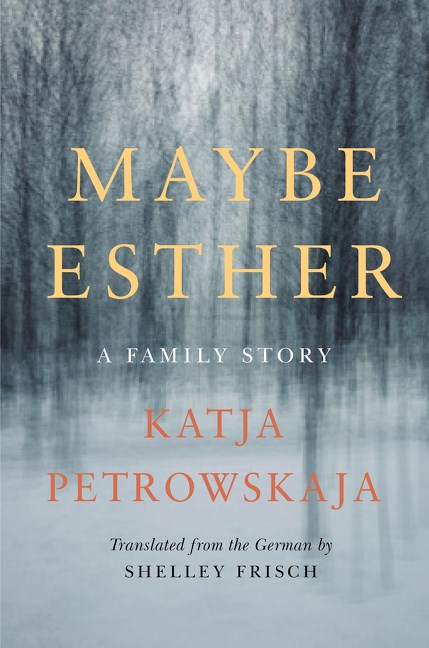 The train station was recently built in the middle of this city, and despite the peace the station was inhospitable, as though it embodied all the losses that no train could outrun, one of the most inhospitable places in our Europe, united as it is forward and backward, yet still sharply bounded, a place that always feels drafty and where your gaze opens out onto a wasteland, unable to alight in an urban jungle, to rest on something before moving out of here, out of this void in the midst of the city, a void that no government can fill, no lavish buildings, no good intentions…I stood on the platform and my eyes once more swept across the huge letters ‘BOMBARDIER Willkommen in Berlin’ underneath the arc of the curved roof…

That’s the Hauptbahnhof, the main train station, in Berlin being described. If you’ve been to this station, you know what an evocative, effective description this is. If you appreciate the style in which it’s written, then you’ll appreciate this book.

Maybe Esther is journalist Katja Petrowskaja’s exploration into her family’s scattered, mysterious past, especially at the point where the biggest fracture occurred, as for so many Europeans at that time, during the Second World War. Born in Kiev but a longtime resident of Berlin, she tracks her family’s convoluted, gap-filled history through the former Soviet countries Russia and Ukraine, and on through Poland, Germany and Austria.

And has she ever got some interesting relatives to track down – one grandfather who went underground in the Bolshevik Revolution, a great-uncle who shot a German diplomatic attache shortly before the war, a grandmother who ran an orphanage for deaf-mute Jewish children in the Urals, another grandfather who disappeared during the war and reappeared without explanation four decades later, and the eponymous Esther (maybe?) a great-grandmother who stayed behind in Kiev and met her fate there.

This is the new English translation of a memoir originally written in German. Language and its connection to memory and identity are part of the story too.

The narrative flits between European lands, collecting clues and pieces of history as they relate to her widely dispersed family. As she researches and hunts like a detective, she paints some detailed scenery of these places that are layered with so much history, good and bad:

If Warsaw were to follow the example of Berlin and set a stumbling stone of memory into the sidewalk for every person who was taken away, the streets of Warsaw, large and small, would be paved with golden stones.

It’s written in a dreamy, running-train-of-thought, stream of consciousness style. I like this sometimes, and it works here in parts, showing interesting examples of creative nonfiction writing and giving a sense of the confusion and disarray that permeate this wildly branched family tree. In other sections, the style became distracting and vague, and I couldn’t glean from it enough meaningful information or understanding. It seemed like a thought running too long and broken up by ALL the commas.

Some portions of the story reminded me of one of my favorite novels, D.M. Thomas’s The White Hotel. It’s a bizarre but beautifully written and layered, often surrealistic account of a woman whose life reveals links to the past, or the future, as it progresses. It’s tough to explain this book without giving too much away – or to explain it at all, really – but the dreamy style with undercurrents of violence and the constant mounting pressure of the defining events of the twentieth century are felt throughout both stories. The style is somewhat similar in places too. And a major defining event figures in both books: the massacre in the Ukrainian ravine of Babi Yar, outside of Kiev, where more than 33,000 Jews were killed in 1941.

Here, Petrowskaja considers the significance of Babi Yar, as it played a major role in her family’s history but holds a complicated place in national identity today:

Does a place stay the same place if, at this place, people murder, bury, blast, hollow out, burn, grind up, scatter, hold their tongues, plant, lie, create landfills and backfills, fill up with concrete, once again hold their tongues, block off, arrest mourners, and then later construct ten monuments, commemorate their own victims once a year, or think they have nothing to do with it?

Sometimes anecdotes from her advancing search are tied so well into moving observations that I had to reread them. They were so simple, yet said a lot with feeling:

…I dial the phone to Mauthausen, a former concentration camp and now a memorial site. For a long time, nobody picks up. The phone rings and rings out there. I get the feeling that I’m calling up the past, and no one is around.

Or they’re surprisingly laugh out loud funny because they’re true but you never realized it, and it says a lot unintentionally about the place: “Austria looks like a slightly aroused aging phallus.”

And she often distills history in a very readable way. Especially considering that this Second World War time period, with its incomprehensibly massive amounts of dead, is scarily easy to consider with a certain numbness, an inability to actually grasp the magnitude. It can be common in reading stories from history, it’s how we protect ourselves. Petrowskaja forces the strong points through: “In the region of Salzburg alone, there were 33,000 registered Nazis, exactly as many as the murdered Jews in the first massacre in my hometown. Nature loves symmetry, and so does history.”

Although the stories are fascinating and sometimes the contextual facts shared alongside the familial anecdotes are memorable and deeply meaningful, like those quoted, too much was lost for me in the rambling, diffuse style. I had a hard time understanding much of what I read. Although I like an impressionistic memoir, and even in translation some of the lines were lovely, it was overall hard for me to get the full meaning from the way it was written.

Definitely recommended to read slowly, which is tempting not to do because it’s broken into short segments that change locations and subjects frequently, but slowly is the only way to really understand it.

This line summed up much of what I felt reading the book: “I tried to read the letter, but I didn’t even understand what sort of alphabet it was from.”

It’s still worth reading, especially if like me you love stories from this historical period, as well as questions of identity and genealogy. But a love of and patience for surreally styled, dreamy, meandering prose is necessary.
Verdict: 3/5

Maybe Esther: A Family Story
by Katja Petrowskaja
translated from the German by Shelley Frisch
published January 31, 2018 by Harper Collins

I received an advance copy from the publisher for review.