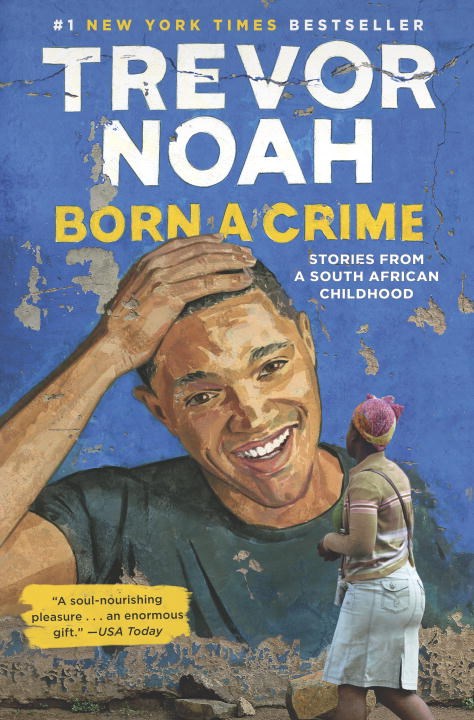 Apartheid is one of those subjects that I know embarrassingly little about beyond the basics. If you’re in the same position, I highly recommend comedian and Daily Show host Trevor Noah’s 2016 memoir, Born a Crime, of his unique experience growing up as mixed-race in apartheid-era South Africa. Noah was born to a South African Xhosa mother and a white Swiss father. His very existence was a serious crime under the laws of apartheid, under which both sexual and romantic relationships between blacks and whites was penalized criminally.

Apartheid was a police state, a system of surveillance and laws designed to keep black people under total control. A full compendium of those laws would run more than three thousand pages and weigh approximately ten pounds, but the general thrust of it should be easy enough for any American to understand. In America you had the forced removal of the native onto reservations coupled with slavery followed by segregation. Imagine all three of those things happening to the same group of people at the same time. That was apartheid.

But his mother is quite the character – she defied many of the apartheid expectations of black women of her generation, getting a job and living on her own in the city, things that were traditionally only for sex workers and even then couldn’t be considered safe. But she went further, striking up the unusual friendship/relationship with the man who would be Noah’s father. She did it simply because she wanted to be a mother and thought he’d be a stable, responsible father who wouldn’t bother her much about the kid in ways she didn’t want – wanting custody or interfering, while still being a good influence for him.

In telling his story of growing up in Soweto, South Africa, a Johannesburg township, Noah describes apartheid and its effect on the people, culture, local economics and beyond in a much clearer, more understandable way than anything else I’ve seen on the topic. It’s extraordinary. He explains so much about what made this a horrible, unjust system through everyday, ordinary examples from his and his friends’ and family’s lives.

He’s comprehensive in what he covers about how lives were lived under apartheid, beginning with his parents’ illegal relationship down to the practice of naming, including why some South Africans have names like “Hitler” and don’t know why that’s a bad thing. This story in particular, which he managed to make so funny despite the very serious implications behind it, was an excellent example of how his smart but purposeful humor is so important, even powerful.

Trevor is an excellent guide through South Africa’s ugly history. And for telling stories that could be unimaginably dark, he manages to fill them with a lot of lightness and always the underlying message that he gleaned from his experiences.

Next to his stories about what it was like living under apartheid and how it’s shaped his identity, the whole book is a tribute to his mother, in a way. He gives her all the credit for turning him into the hardworking, moral person that he is despite the hard circumstances of his childhood world.

The book is structured around plenty of funny anecdotes, as would be expected from a comedian’s memoir, but with just as many meaningful ones and lessons learned. These come from extremely difficult and adverse situations – poverty, racism, classism, discrimination, crime, a reliance on religion over more immediate worldly solutions or concerns, and a picture of a chaotic setting in general – yet he’s found the ways to learn from it all with humor and a surprising amount of wisdom. I was especially impressed with the unexpected things he turned to great advantage, like learning multiple African languages so that he always had a way to communicate with people in their own tongues. He describes how that saved him on multiple occasions and it’s clear that it also shaped his sensitivity to others and his sense of humanity.

His mother, Patricia, is clearly his hero, having endured so much in her own life and still been able to provide for him and his brother. The book’s tensest moment comes when he describes his abusive stepfather shooting his mother in the head, when he thought the world as he knew it was about to end. And I mean, just think about that for a moment: having to describe the moment you learned your mother had been shot in the head by a man who’d abused them both horribly. In a comedian’s memoir. If that’s not a testament to his writing talent, I don’t know what is.

He’s spoken a lot before about what an influence and inspiration his mother was, but it’s powerful to see it in action, the real reasons why she affected him as she did. He describes his mother’s bold youth, taking control of her own life and future, and how her choices and unusual independence eventually led to him existing.

“Learn from your past and be better because of your past,” she would say, “but don’t cry about your past. Life is full of pain. Let the pain sharpen you, but don’t hold on to it. Don’t be bitter.” And she never was. The deprivations of her youth, the betrayals of her parents, she never complained about any of it.

As moving as the book is, it’s also hilarious, because as anyone who’s watched him on The Daily Show knows, he has a gift for humor in his storytelling. I’ve heard that this book is great on audio, but it’s enough even reading it. I loved his stories about the more lighthearted moments with mom.

My relationship with my mom was like the relationship between a cop and a criminal in the movies—the relentless detective and the devious mastermind she’s determined to catch. They’re bitter rivals, but, damn, they respect the hell out of each other.

I also learned that he’s my kind of person: “I lived inside my head. I still live inside my head. To this day you can leave me alone for hours and I’m perfectly happy entertaining myself. I have to remember to be with people.”

I didn’t like or quite understand the way his relationship with his father was handled, as it seemed his father wasn’t bad but did suddenly disappear from his life; when they reconnected, I couldn’t get an understanding of the relationship from the relatively brief descriptions here. It was an odd circumstance, obviously (consider the title, and his stories about walking on a different side of the street from his father when he and his mother went out with him together, out of necessity) but it still felt like there were gaps in the narrative. Maybe he just didn’t want to share, I don’t know. Something felt missing.

Knowing anything about him or being a fan of his news show aren’t prerequisites for enjoying the book at all. Beyond watching the show semi-regularly, I knew nothing about him personally, but it doesn’t matter – his memoir is much more than a celebrity telling fans their stories, it’s historically and culturally important and makes a deep impression.

Here, describing why what he’s managed to do is so hard, and why it matters, he makes an incredibly simple but important overarching point that so many people seem to ignore:

My family had been denied the things his family had taken for granted. I had a natural talent for selling to people, but without knowledge and resources, where was that going to get me? People always lecture the poor: “Take responsibility for yourself! Make something of yourself!” But with what raw materials are the poor to make something of themselves?
People love to say, “Give a man a fish, and he’ll eat for a day. Teach a man to fish, and he’ll eat for a lifetime.” What they don’t say is, “And it would be nice if you gave him a fishing rod.” That’s the part of the analogy that’s missing.

The book ends shortly after his mother’s shooting, and, thankfully, miraculous recovery. It was just announced that his second memoir is in the works, picking up where this one leaves off and telling the stories of how he began his career, which eventually took him to the United States. That’s what I couldn’t wait to hear after finishing this book – reading of his early exploits, it’s easy to see even through his mistakes the deeply good person he was becoming all along, but I couldn’t imagine the jump that led him to America and taking over the anchoring one of Comedy Central’s most popular shows of all time, from one of the most well known and respected players in political comedy. I’m looking forward to what other stories he has to tell, with profound respect for his journey thus far. 4/5

19 thoughts on “South African Roots and Apartheid’s Influence, with a Sense of Humor”