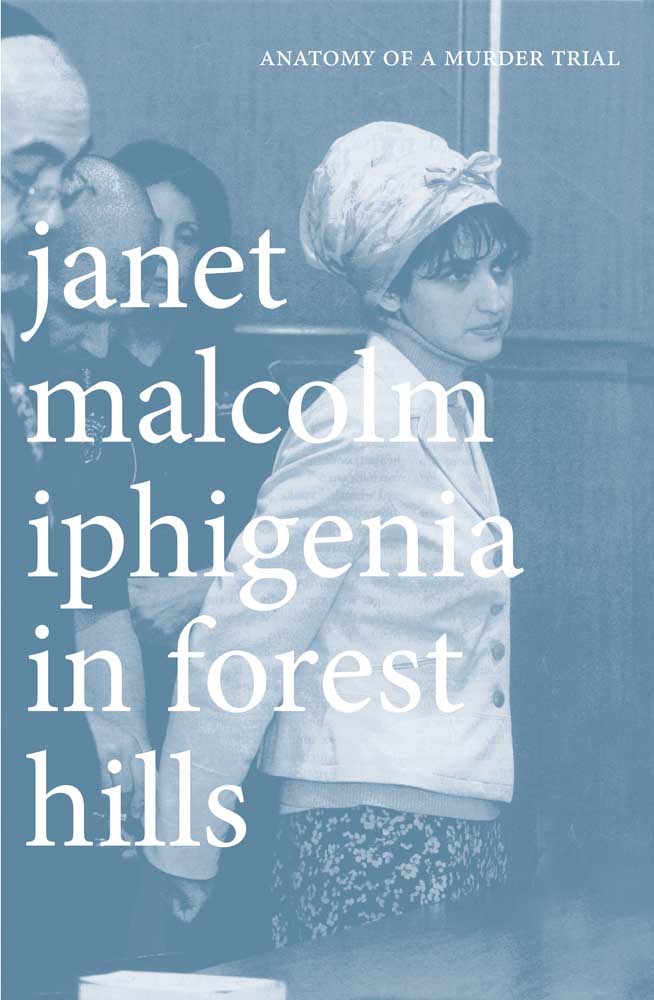 Iphigenia in Forest Hills is a well reported account of a 2009 murder trial by renowned journalist Janet Malcolm. The victim at the center was dentist Daniel Malakov, who in 2007 was shot on a playground allegedly on the orders of his wife, Mazoltov Borukhova, a respected doctor in Forest Hills, Queens. Malakov’s death was witnessed by the pair’s four-year-old daughter, Michelle.

The estranged couple were Orthodox Jews, members of an even more insular group within the Orthodox community. Marina (Mazoltov’s nickname) and Daniel were members of the Bukharan Jewish community, a famously tight-knight group originally hailing from Uzbekistan. The squabbles between Borukhova’s and Malakov’s families are also part of the story told here.

The prosecution alleges that Borukhova hired Mikhail Mallayev, her cousin by marriage, as a hit man because her divorce with Daniel was getting ugly and contentious. The custody battle over Michelle was the major point of contention, with Daniel having been granted custody shortly before the murder. The pair were meeting at the Queens park to hand over Michelle for Borukhova’s visitation.

The motive is that with her ex-husband out of the picture, Borukhova could have unfettered access to her daughter, the one thing she wanted to hold onto from their relationship. She allegedly offered Mallayev $20,000 to kill Malakov. In the days leading up to the murder, Borukhova and Mallayev had exchanged a suspiciously high amount of phone calls, some of which Borukhova inexplicably recorded and which are translated and used in the trial. Which leads to one of the problematic aspects of the trial Malcolm is interested in: “We go through life mishearing and mis-seeing and misunderstanding so that the stories we tell ourselves will add up. Trial lawyers push this human tendency to a higher level. They are playing for higher stakes than we are playing for when we tinker with actuality in order to transform the tale told by an idiot into an orderly, self-serving narrative.”

But why are they transforming tales instead of trying to cull the truth of the narrative from what the facts actually are? This is a huge, disturbing issue in the justice system.

The story Malcolm tells is compelling – including the courtroom procedure, which can often be a dull part of true crime narratives. This one is interesting because Malcolm shows how it’s more of “a contest between competing narratives” – which side, prosecution or defense, can tell the better story with fewer holes, unexplainable or ill-fitting details, or clashes between proven fact and the tale they’re selling. That’s not justice at all.

And she notes that it also comes down to which side can strike the right chords of sympathy. In this case, Borukhova comes across as cold to the jury, which goes badly for her.

After making a baseball analogy, Borukhova’s attorney Stephen Scaring says that a jury can’t help but be a little biased: “Jurors are not supposed to want anything. They are supposed to follow the match of the opposing attorneys in a state of dumb desirelessness. No rooting in the courtroom, please. But rooting is on our blood; we take sides as we take breaths.”

The judge, Robert Hanophy, is in a hurry to make sure the trial resolves in a timely fashion – he has a Caribbean vacation booked. This leads him to forcing the defense to make closing arguments on a Friday, while the prosecution gets the weekend to prepare and deliver a closing argument on Monday morning. It’s one of several displays Malcolm notes of favoritism towards the prosecution.

And yet, what’s really interesting about this case is that, unlike many that have been the center of recent projects highlighting miscarriages of justice and the wrongfully convicted, Marina seems to most likely be guilty. Malcom is a staff writer for the New Yorker so was assigned the trial coverage initially, but it seems an odd choice for a case to expand into book-length form, especially with the recent surge of interest and attention towards potential wrongful convictions or miscarriage of justice cases getting closer journalistic looks, like Making a Murderer, Serial, Just Mercy, Convenient Suspect, etc.

Malcolm’s observation of prosecution and defense merely trying to tell a better, more convincing story overall, rather than trying to interpret and relate the story that the actual facts tell, is a powerful one. So perhaps that’s where this makes an interesting contribution to the criminal justice canon.

But ultimately, Borukhova had strong motive and there’s plenty of evidence indicating her involvement, beyond the questionable aspects like a mistranslated line or word from one of those recorded phone calls.

It’s a short book and feels over too soon without reaching any kind of peak. It’s the first I’ve read from Janet Malcolm, and I found her writing absolutely compelling and engaging – effortless-seeming even, and this despite a lack of excitement, much intrigue or suspense, which I think says a lot. I see her incredible journalistic and writing talent clearly, I just felt I couldn’t appreciate the full range of it here. As much as I liked certain parts of this book, I wasn’t completely enamored with it as a whole or on board with the specific subject. It’s enough to make me seek out more of her writing, though. Verdict: 3/5