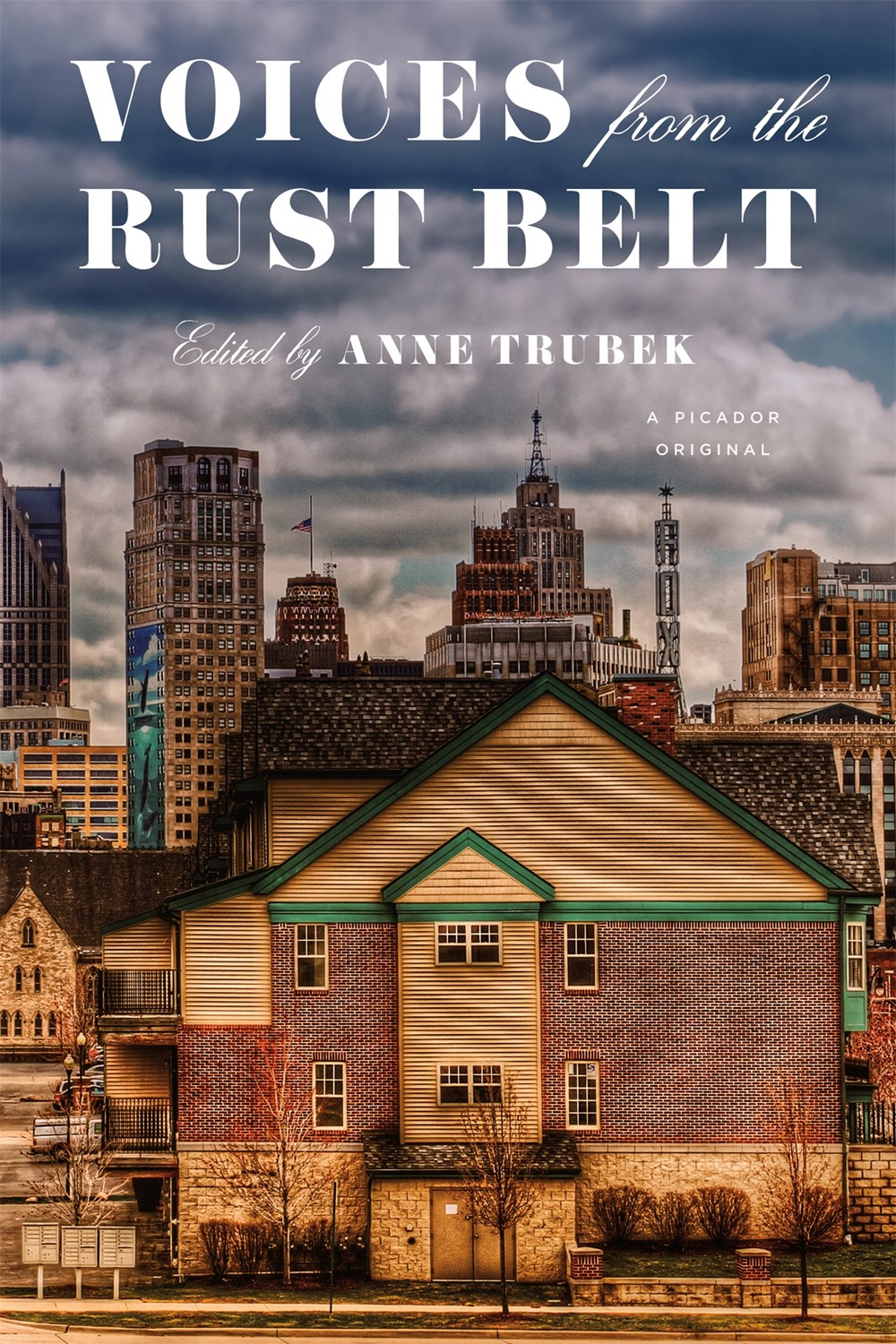 These essays address segregated schools, rural childhoods, suburban ennui, lead poisoning, opiate addiction, and job loss. They reflect upon happy childhoods, successful community ventures, warm refuges for outsiders, and hidden oases of natural beauty. But mainly they are stories drawn from uniquely personal experiences. A girl has her bike stolen. A social worker in Pittsburgh makes calls on clients. A journalist from Buffalo moves away, and misses home. A city manager stops fighting the urge to relocate and decides to make a life in Akron. An ecologist takes her students to a CVS parking lot. A father gives his daughter a bath in the lead-contaminated water of Flint, Michigan.

The term “Rust Belt” was coined by Walter Mondale in 1984 during a campaign stop speech to Cleveland steelworkers, while criticizing Reagan’s trade policies. It fit the region and its particular industries so well that it stuck, entering the popular parlance. I didn’t know that’s where the term came from before reading this collection of essays focused on the well known but sometimes difficult to understand region, curated by Anne Trubek, editor of Belt magazine.

I’ve become fascinated with these kind of dispatches from specific areas of the country. Especially as they’ve come more into focus in light of the influential role certain regions played in the last presidential election. I always knew, but this particularly drives home, how easy it is to become isolated in one’s perception if your worldview stems from an urban area, which I know I’m guilty of.

So I was very interested in these 24 essays told by different voices across the region, both those currently living there and former residents. I was impressed that the voices are so diverse – spanning races, religions, sexuality, gender, etc. This was an excellent element. And it had some excellent, illuminating moments. It’s worth reading for some unique insights here and there, but some of it felt surprisingly unpolished. This is to be expected to some extent since not all of the featured essayists are professional writers. Rather some experiential stories are drawn from public officials, teachers and simply locals.

The message they’re bearing is still important, and there’s a lot to learn about how the region has changed – industrially, economically, on a community level. Sometimes these changes are related with anger, with sadness, with urgency – one incredibly affecting story relates the writer’s desperation to gain custody of his daughter as her mother spirals deeper into heroin addiction. Another difficult piece tells of bathing a child in the contaminated water of Flint, Michigan.

Some of my highlights:

From Jacqueline Marino’s “A Girl’s Youngstown”: I didn’t realize then that you don’t get to choose what parts of your hometown you get to claim any more than you can choose your grandmother’s green eyes or your grandfather’s musical talent. You can’t take the homemade cavatelli and leave the corrupt politicians, or notice the Butler art institute but not the ruins. The Youngstown of my past is two cities: one safe, leafy, and full of promise; the other scary, dirty, and stifling. In my memories, in me, both remain.

In Kathryn M. Flinn’s “This is a Place”, Flinn, a plant ecologist, stresses the importance of local ecology, and uses that example as a bridge into the idea that we can’t understand the greater world without understanding what’s growing, teeming, thriving right in front of us. This stays true even if the local seems less glamorous, exotic, or worst of all, less important than what’s out there elsewhere in the great wide world. I loved the concept behind this one, it was a thoughtful and even surprisingly charming piece. I think my favorite of the collection.

In G.M. Donley’s “That Better Place; or, the Problem with Mobility”, the author addresses a range of points that have contributed to the current economic and social problems in Rust Belt cities. These included issues of building, retail, segregation, schools, space and both its lack or overabundance and the problems specifically associated with each. It offered a good breakdown for understanding these.

The Rust Belt has proven to be an ideal laboratory for exploring the practical problems associated with a society habituated to easy mobility, specifically what results when mobility outruns population growth. Booming growth tends to mask economic and social side effects. But lucky us, we haven’t had any booming growth for a while, so the results are plain to see here.

Carolyne Whelan’s “King Coal and the West Virginia Mine Wars Museum” is a great piece, looking at the history of the coal mines and their legacy in Matewan, Mingo County, West Virginia. The juxtaposition of the miners’ struggle and the criminality of corporate coal was fascinating, and it’s a great piece of writing.

Overall, although a few selections were great, others didn’t shine so brightly for me. Maybe because they were fairly short, and I tend to like longer-form journalism better. It’s certainly difficult to convey a strong message in a shorter piece while still making an interesting, well written piece of journalism. Although there’s undeniably power in the rawness of some of the words and emotions here. Others were just on the drier side. The longer format also lends itself better to more meaningful analysis, discourse, and often even creativity within a piece. These sometimes felt hurried or cut off.

But their brevity does lend itself to a certain emphasis on the topics the writers want you to understand and the message they want to be convey. The Rust Belt is a frequently overlooked area, I’m happy for any contribution that allows these diverse voices to speak on the big, affecting topics that have long troubled a region that much of the country ignores.
Verdict: 3/5