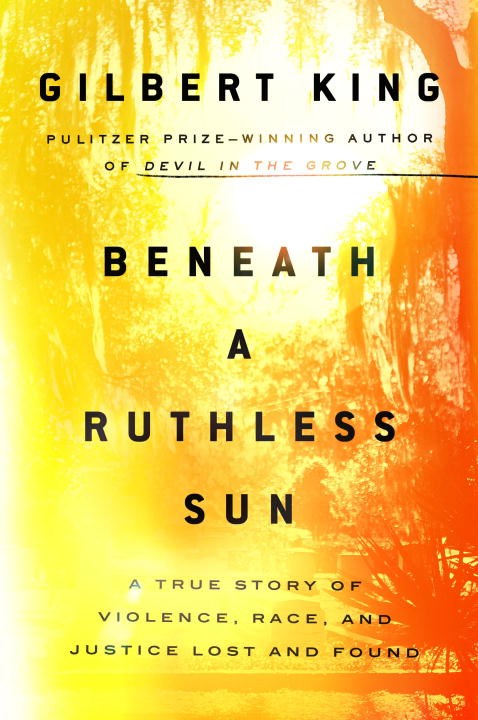 Book review: Beneath a Ruthless Sun, by Gilbert King
Amazon

Gilbert King, 2013 Pulitzer winner for Devil in the Grove: Thurgood Marshall, the Groveland Boys, and the Dawn of a New America, returns to the setting of that book: mid-20th century Florida and the intersection of justice and race relations, to tell a new story from the era in this extensive work of history.

The book, which also weaves in some important related history of the Groveland Boys case and what it meant for justice and civil rights, has at its core quite a different case, although similarly one involving a white woman raped by a black man in Lake County in central Florida.

In 1957, Jesse Daniels, a sweet-natured and developmentally challenged 19-year-old white boy from Okahumpka, is hauled off days after the rape of a well-connected and wealthy white woman, Blanche Knowles. Her husband, Joe Knowles, later to enter politics, is away from their home the night a black man (per her account) breaks in and rapes her. Soon after the domineering, aggressive, and incredibly racist Sheriff Willis McCall rounds up his usual suspects of neighborhood black youth, he mysteriously lets them all go. We see repeated, distressing examples of how far from his nature this is – he’s killed young black men for far less (and gotten away with it.)

Instead, Jesse is held in custody for the crime, refused contact with his parents or a lawyer, and eventually denied a trial because of his mental state. All this despite a major piece of evidence – a size 34 pair of underwear left by the rapist at the crime scene – being wholly incompatible with his size 26 frame. This is what blew my mind about this case – obvious evidence was simply ignored, so even despite a corrupt sheriff’s calculated, controlled spin, it was allowable to just ignore whatever didn’t fit their story, or lie and say it actually did. The mind reels.

Jesse makes a verbal confession during an intense interrogation, although he tells his mother that someone “did something” to him to facilitate the confession. Especially now, as we become more aware of coercive interrogation techniques through scarily all-too-similar accounts, that’s not hard to believe. In Jesse’s case, he signed a confession at gunpoint in the middle of the night, and of course, these late night exhaustive interrogations regularly break people without developmental disabilities, let alone what they can do to someone who understands neither the circumstances nor the repercussions.

Meanwhile, another rapist continues to strike around the Lake County area before being caught and it’s obvious he knows something about the Knowles case. So what was behind this obvious miscarriage of justice?

There are some shining good examples of humanity in this awful, upsetting story – Evvie Griffin, later to fight McCall for the sheriff position, stands out as one of the few law enforcement personalities in this corrupt, racist jurisdiction who seems to care at all about truth and treating people correctly, finally becoming the much-needed thorn in the villainous McCall’s side.

And there’s the indefatigable Mabel Norris Reese, a journalist run out of town by McCall’s threats and machinations as she relentlessly pokes into his business and calls him out for his shadowy transgressions and manipulation of events by steadfastly refusing to tell the truth. She continues to fight him and publishes prolific attacks against his allegations with her uncovered evidence of what actually happened in certain cases, not only in Jesse’s, although his is particularly strange and egregious.

Reese also befriends Pearl Daniels, Jesse’s mother, and advocates for her to political and bureaucratic higher-ups as well as helping her visit Jesse where he’s been sent, without trial – the Chattahoochee state mental institution, a grim place where patients don’t receive the care they need, to put it mildly. It’s thanks largely in part to Reese’s justice warrior work that Jesse gets a second chance.

In telling this story, of Jesse’s wrongful conviction and the string of rapes that took place and were traceable to a different perpetrator, it’s necessary to have some understanding of the dark and murky racial politics and history of this part of Florida, and King delivers fully on that. Maybe a little too fully for me. As a history, this is nothing if not thorough, but it was at the expense of smooth reading. Sometimes the plethora of details got in the way of an engaging narrative.

The narrative jumps from topic to topic, often skipping back and forth in time, when a past event is necessary for explaining a present one, or elucidating on some twist in the main story of Jesse’s confinement or McCall’s actions. I found it somewhat confusing, and the book gets bogged down in the details and specifics from time to time. So many people are introduced, their backgrounds, education, careers detailed, that I lost track easily. That’s not to say these backgrounds and histories are unimportant, they’re generally relevant, I just found it hard to entirely keep straight.

Other times, the writing is so beautifully done: that kind of rich, enveloping narrative nonfiction style that completely draws you into a different time. King also uses some excellent cliffhangers to great effect, which did make it hard for me to put the book down at times. It’s also impossible to read without having a wealth of emotions inspired in you – anger, outrage, disappointment, sadness, frustration, horror. Be prepared for all that. It’s not a day at the park, but this is too important to ignore. I love that more books are being published on these topics of wrongful conviction and efforts to pursue justice.

Vacillating between page-turning, cliffhanging narrative nonfiction and a Floridian swamp of data overload, this is nonetheless an important, thorough, and complex case study in justice and race. Despite these events transpiring in the late 1950s through roughly the early 70s, it’s striking to realize that some of the players were active and influential as late as the mid-80s. This isn’t ancient history, it’s far too recent and incredibly relevant, as we still see this history repeating. I wished for a book a little more pared-down to be more easily readable, but the sections of this that are more accessible help propel through the rest of it.
Verdict: 3.5/5

Beneath a Ruthless Sun:
A True Story of Violence, Race, and Justice Lost and Found
by Gilbert King
published April 24, 2018 by Riverhead Books (Penguin)