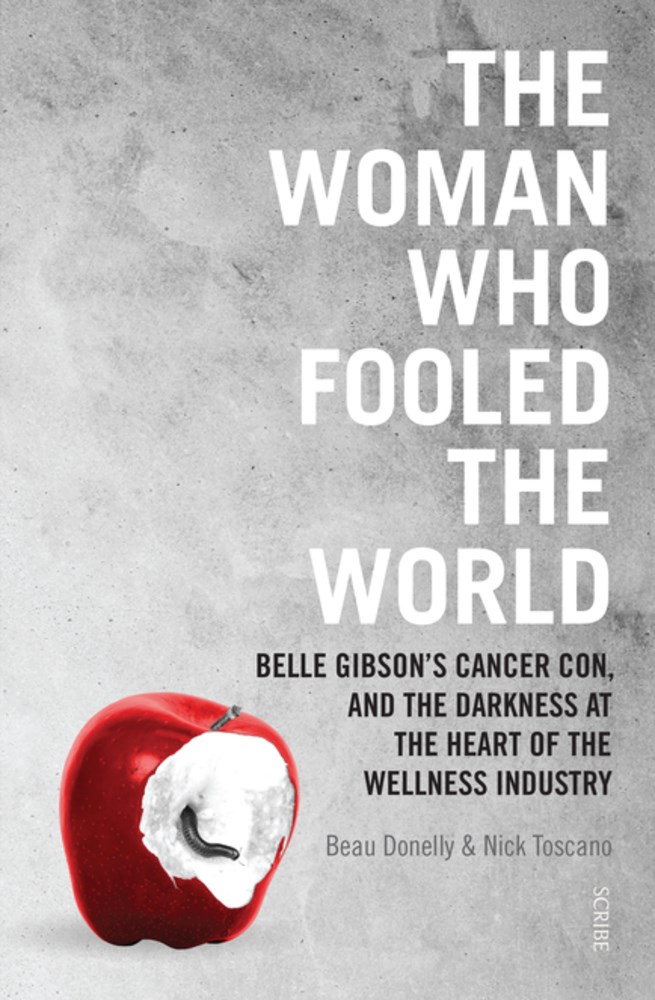 Book review: The Woman Who Fooled the World, by Beau Donelly and Nick Toscano
Amazon

The front cover of the book whispered of a back-to-basics approach to wellness, lifestyle and nutrition. Of course, Gibson had no expertise in any such area. But that didn’t matter. Her credentials were listed in the first words of the very first sentence on the back cover. Social media sensation.

I remember seeing Belle Gibson pop up in the news a few years ago, after her infamous cancer con had come to light. As I completely avoid lifestyle or health/fitness Instagrams and blogs, I never encountered her massive following. Even if like me, you weren’t invested in her wildly popular Whole Pantry app, blog or cookbook, her story is worth knowing, as it has far reaching implications in the modern culture of lightning-fast information exchange with little fact checking or basis.

The journalists who broke the story of her hoax have written an in-depth account of what’s known about Gibson’s background and her explosion into social media renown and financial success with this “wellness” app, marketed on claims of miraculously healing her cancer.

The Australian Gibson started an Instagram account claiming that she’d been diagnosed with brain cancer, had eschewed conventional treatment and subsequently been able to heal herself with holistic methods, clean eating, juicing, etc. You know the drill. I avoid these kind of lifestyle Instagrams like the plague and even I know the drill. She amassed hundreds of thousands of followers, snagged a cookbook deal from Penguin, and was handpicked by Apple to adapt her Whole Pantry app for the Apple watch release. The fact that she was able to perpetrate this fraud to such major international companies without their doing any due diligence is just extraordinary.

By the end of 2013, it was named Apple’s Best Food and Drink App, and the second-best iPhone app in the world. It was downloaded hundreds of thousands of times globally, and inspired lucrative book deals in Australia, the US, and the UK. The Whole Pantry brand would earn Gibson half a million dollars in less than two years.

The book doesn’t only cover what’s known (there are big holes) of Gibson’s background and what she did with her company, it takes several side delves into the world of wellness, including “wellness warriors” like Gibson and other popular young, usually white women who espouse theories of “clean eating”, “superfoods”, special supplements or mixes, sing the praises of juicing, yoga, meditation, holistic or alternative therapies, and generally create dangerous phobias about certain foods or food groups – all without any medical, scientific, or nutritional background.

As the authors put it: For the most part, this new breed of wellness gurus is white and female, young and attractive, engaging, and media-savvy. Some are yoga teachers, or personal trainers, or martial-arts instructors, but scant few have any qualifications that equip them to give health advice. What they do have is an Instagram account.

This kind of wellness business has been booming for a long time. Even Gwyneth Paltrow and her reprehensible GOOP, with its many debunked claims, get mentions. The authors write, “the rise of the wellness blogger embodies one of the most worrying cultural trends of our time: the unstoppable spread of misinformation on the internet.” This element of the book completely fascinated me.

And I understand the frustration when conventional medicine fails any health problem, but abandoning tried and tested methods in favor of “clean eating” and juicing seems so counterintuitive. I loved the no-nonsense attitude of the husband of a young cancer patient who followed Belle’s blog and considered giving up chemotherapy and radiation and switching to her recipes as treatment: “He wasn’t going to let a ‘hippie with a juicing machine and an Instagram page’ undercut years of medical progress that could give his wife the best chance of staying alive.”

Donelley and Toscano go to the root of the wellness industry, and find that it began quite differently than what it’s morphed into: One of its primary pioneers explains sadly that he intended for the concepts and ideas behind wellness treatments to complement conventional scientific and medical progressions, “before there was a strong counter-narrative to accepted science, back when it was about ‘merging the best of both worlds, complementary and conventional.'” Which just makes sense.

Few cancer specialists dispute the idea that many therapies falling under today’s big umbrella of wellness can have a positive effect on patients. When used in tandem with chemotherapy, radiation therapy, and surgery, things such as yoga, massage, meditation, acupuncture, aromatherapy, and relaxation techniques constitute what cancer doctors now refer to as “complementary” therapies.

The reporters also incorporate research and personal stories about other instances of cancer cons and frauds, which are heartbreaking. That’s the drawback to reading this book – being faced with such intimate experiences of the hard living, and tragic deaths, of cancer sufferers. But it serves to powerfully underscore how evil Gibson’s con was – even if, as seems to be the case, she wasn’t really smart enough to orchestrate it as a big con. Scratch the surface and the whole thing falls apart, as one person says. She lied because she knew she needed a gimmick in the oversaturated online world of “wellness warriors” with many women trying to carve out a niche for themselves in the clean eating, healthy living blog genre – “acai-bowl enthusiasts”, as the authors refer to one.

That’s another of several extraordinary elements in this story – Gibson isn’t a master con artist or even a particularly talented manipulator, like others who have pulled off infamous frauds. Here she is in an interview post-exposure of her lies:

“It’s just very scary, to be honest,” she says, her voice wobbling. “Because you start to doubt the crux of things that make up who you are. You know, I’m blonde and I’m tall, I’ve got hazel eyes and I’ve got cancer. And all of a sudden, you take away some of those high-level things and it’s really daunting.”

To quote a former boss, musing after I described a problematic client, “Sounds like an intelligence problem.” To clarify Gibson’s quote – there was never any possibility that she had a brain tumor. The “doctor” she claims diagnosed her doesn’t seem to exist. What she did have was a long-standing reputation for outlandish fabrications. This time, she got incredibly lucky and hit the jackpot – getting in on the early days of Instagram and a boom in wellness blogging, coupled with an outrageous claim that set her story apart and amazingly, didn’t get fact checked. And of course, there was the age old allure of alternative treatments, now entering a very scary age of easy dissemination and assertions online.

The journalists who exposed her, thanks to acting on suspicions from her friends along with discovering that promised charity contributions had never been donated, do excellent work in researching this story and putting it into vivid, well fleshed out context. It’s especially admirable what they’ve unearthed considering that many were horrified by having been taken in by the con and refused to speak about her. I haven’t even touched on what the repercussions were for Penguin for failing to fact check her even when they had suspicions.

Some quotes/excerpts I particularly loved:

Her name is sometimes used as a synonym for fraud, with one tweet criticizing Donald Trump as the Belle Gibson of politics.

An oncologist director of a clinical trials unit explains how even as cancer treatments have improved and streamlined in recent years and scientific knowledge has increased, “the community’s thinking about the disease has become more irrational. ‘If there was magic, and I didn’t have to have this terrible conversation, I’d be using magic. If standing in a bucket of manure was going to make a difference, you’d be standing in a bucket of manure, and there would be a long line of people out the door behind you. It doesn’t work. If drinking a glass of orange juice makes you feel better, or coffee enemas or shark cartilage make you feel better, then fine, but if it was going to help treat your cancer, then we would be doing it..if it sounds too good to be true, it’s too good to be true. And if it sounds crazy, it’s crazy.'”

“Even what she’s going through now is absolutely nothing compared to what people fighting cancer go through. I have to work, but my body is failing me, and this witch of a person is still unaffected by all the lies she told and all the sick people she preyed on.” That’s Kate, the woman whose husband refused to let her take up Gibson’s “method”

Meticulously researched, well written, entirely engrossing journalistic account of a badly executed fraud that took advantage of incredibly vulnerable people in a lot of pain, physically and mentally, and how it all came crumbling down, with plenty of relevant, fascinating segues into the history and the cults/culture of healing.
Verdict: 4/5 (It’s hard to know and ruminate over some of these tragic stories, also some descriptions of Australian society people and events she attended were lost on me – but they serve to show how high she went so quickly.)

I received an advance copy of the US edition for unbiased review.
Buy it: Amazon
Book Depository