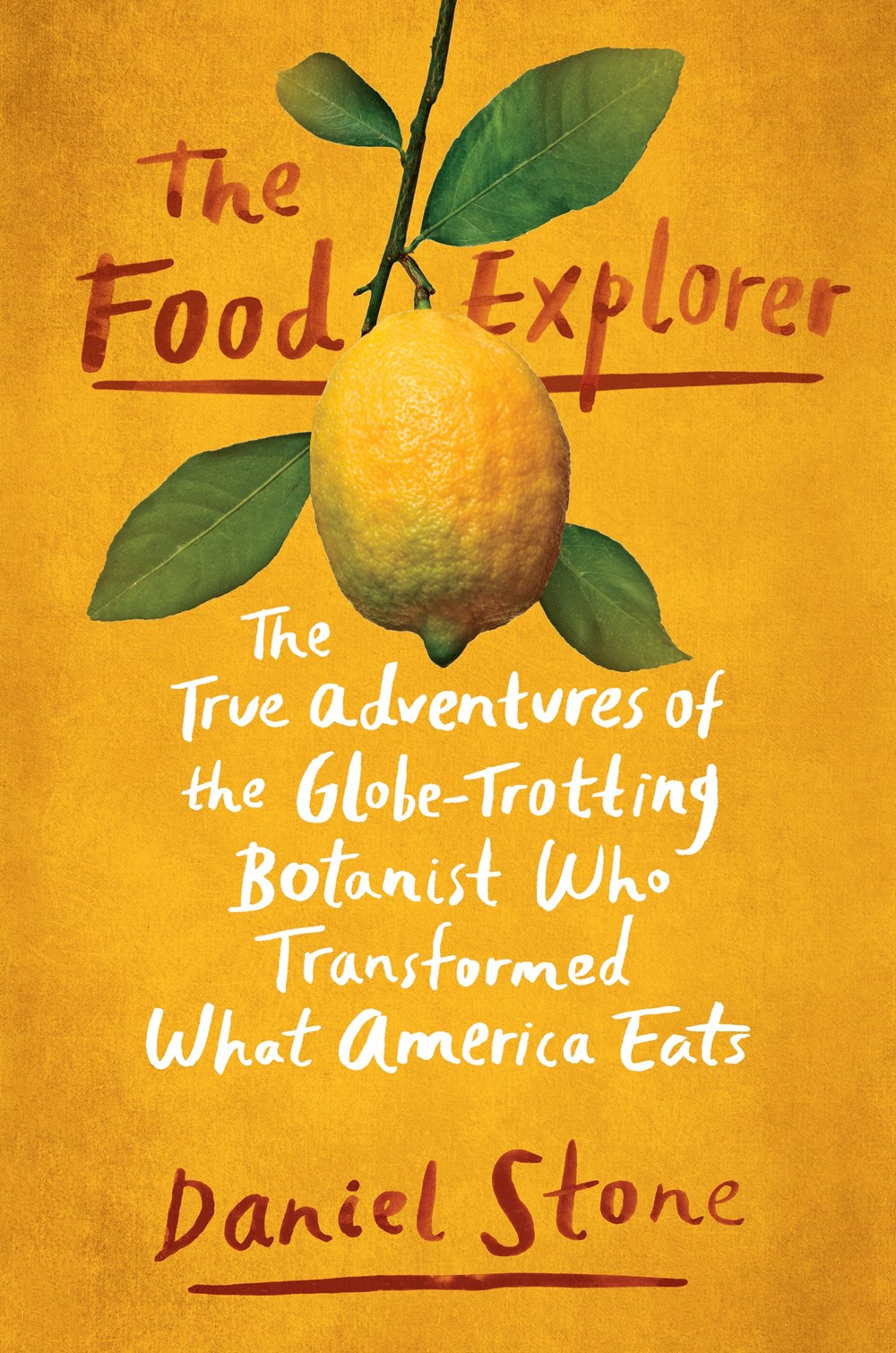 One of the humbling parts of being an American is the regular reminder that no matter how swollen America’s pride or power, nothing has been American for very long. A few years ago, it occurred to me that the same way immigrants came to our soil, so did our food.
I was at my desk one morning researching a story for National Geographic when I came across a map showing where popular crops were first domesticated. Florida’s famous oranges grew first in China. The bananas in every American supermarket originated in Papua New Guinea. Apples that Washington claims as its heritage came from Kazakhstan, and Napa’s grapes saw their first light in the Caucasus. To ask when these became American crops seemed a little like asking how people from England became Americans. It was, in a word, complicated.

So begins National Geographic journalist Daniel Stone’s biography and rich historical account of the life’s work of David Fairchild, a man whose name you may not know, but whose contributions to the American agricultural and culinary palettes you definitely do.

I started to enjoy reciting his greatest hits—dates, mangoes, pistachios, Egyptian cotton, wasabi, cherry blossoms—and watching people’s eyebrows go up. Almost every time they would say something like, “Gosh, it never dawned on me someone brought those things here.” We tend to think of food from the ground as a type of environmental entitlement that predates humans, a connection with the raw planet itself. But what we eat is no less curated than a museum exhibit. Fairchild saw the opportunity in a bare canvas to add new color and texture.

Those hundreds of thousands of additions were fruits, vegetables, plants, and seeds carefully captured from distant lands. This book is a treasure trove of historical and cultural information. I was intrigued by the topic because reading Sarah Lohman’s excellent Eight Flavors I realized how little I knew about how American cuisine had developed. If Lohman’s book covers the spices, Stone’s gives the back story on how much of our plant life arrived on North American shores. It’s incredible to learn how many things – from avocados to kale, cashews and Bavarian hops to Washington, D.C.’s iconic cherry blossom trees – we owe to one man who’s not a household name.

US crops at the time of Fairchild’s work in the late 1890s were fairly uniform, limited, and unexciting. Worse, the varied coast-to-coast climates the country had to offer, especially those amenable to different types of growth like Hawaii, Florida, and California, weren’t taken advantage of. “He didn’t know it, but America had a need for David Fairchild.”

An adventurous biologist and botanist, Fairchild worked with the fledgling US Department of Agriculture’s Office of Seed and Plant Introduction before abandoning a desk job he wasn’t suited for in favor of a wealthy benefactor with a case of wanderlust. That was Barbour Lathrop, a philanthropist who developed a penchant for world travel and persuaded Fairchild to go on collecting expeditions for the US government on his dime. Fairchild and Lathrop embarked on multiple globetrotting excursions together, despite some prickly personal conflicts at the start. They collected samples of plant and tree cuttings, fruits and seeds, painstakingly packing them for shipment to the US along with suggesting the climates where Fairchild thought they could thrive.

His scouting methodology involved following interesting leads and asking lots of questions. He grew adept at bartering, sensitive cross-cultural understandings, and knowing the right things to ask. I liked an anecdote of his quizzing fellow passengers on a ship as it crossed the Pacific with one of his favorites for sussing out directions to follow: “What is the most remarkable fruit you’ve ever eaten?”…then scribbl[ing] furiously as the person pulled up some recollection from their childhood.”

A fascinating but tragic side story, intertwined with Fairchild and his legacy, is that of Frank Meyer, whose name graces one of his popular introductions, the Meyer lemon (spotted in a doorway in Peking.) Meyer traveled and collected specimens, often in China, Japan and the Middle East, shipping them back to Fairchild while he was in the US. Greatly successful in his plant introductions, Meyer suffered depression that worsened especially in his travels in remote areas, and he died mysteriously while on a trip in China.

Stone has an intuitive way of writing and handling personal stories that I appreciated, and he blends a wealth of facts with culture and the writings of these figures to give readers a broader landscape for understanding. The experiences they had while traveling and collecting, and the ways their personalities influenced their work and professional and private relationships are excellently and sensitively told.

And the work isn’t all successes. Some of the stories are of introductions that failed to catch on and why, despite Fairchild’s dedicated efforts. Some plants, particularly those intended as crops, just weren’t economically successful; others were ahead of their time, like a certain fruit (!) that no one was interested in outside of South America: “Fairchild had been too early. Other than pointing out that the Andeans had put quinoa in cakes and beer, and that it might be tested in the South and the mountains of Colorado, all he could suggest to his Washington colleagues was that quinoa could be useful “as a medicine . . . to remedy catarrh,” a great buildup of sinus mucus the world would come to know as the common cold. And so quinoa remained local and indigenous for another ten decades.”

In 1876 at the World’s Fair in Philadelphia, a delicacy called a banana, originally a crop of the Malay Islands, made its public debut in the United States, selling for a dime apiece and wrapped in tinfoil to prevent its phallic shape from offending the crowd’s Victorian sensibilities. How else to eat one but with a fork and knife?

In Siau Island, Indonesia: When the chief ate leaves of the papaya plant, Fairchild asked if he could take the chief’s picture when he was midbite. If people at home learned that faraway people ate papaya leaves—later shown to balance blood sugar, boost immunity, and even weaken cancer cells—they might try them, too. His cynicism about people’s stubborn tastes had grown strong. “I know there are many people who will shy at the idea of even tasting the leaves of the papaya,” Fairchild wrote of the encounter. “But as they shake their heads they will reach for a cigarette.”

This is a fascinating history of Fairchild and his colleagues, and their successes and struggles in shaping the American table and agricultural landscape. It’s mostly well written, and for a book that packs in so much information plus side stories of conflicts, personal lives, and political and cultural context, I was surprised that it usually read so smoothly. It did have a few sections that I felt dragged and were dry, but overall it’s engaging. I can’t believe how much I didn’t know about so many products I take for granted. Even writing this, I’m astounded at how much I learned – impossible to do it justice in summary. A book that’s a little education unto itself.
Verdict: almost 4/5

The Food Explorer:
The True Adventures of the Globe-Trotting Botanist Who Transformed What America Eats
by Daniel Stone
published February 20, 2018 by Penguin Dutton