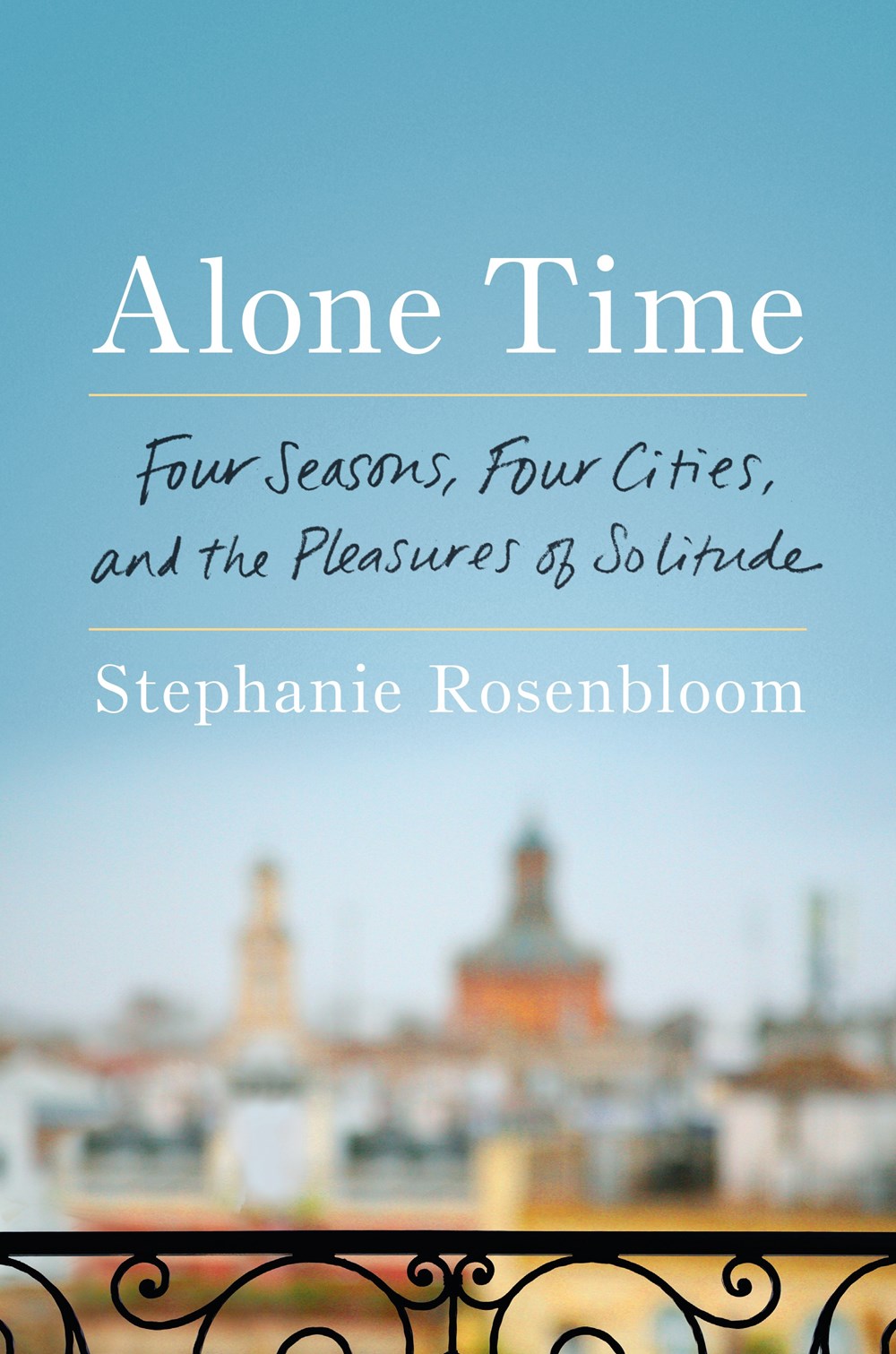 What follows are impressions of four journeys; a love letter to loners, to witches and shamans, to those who cherish their friends, spouses, and partners yet also want alone time to think, create, have an adventure, learn a skill, or solve a problem…find your “thinking path,” to discover what you want from your own solitary moments.

New York Times Travel columnist Stephanie Rosenbloom looks at how meaningful traveling  alone – or exploring one’s hometown – can be in four cities, each during a different season: spring in Paris, summer in Istanbul, fall in Florence, and winter in New York.

The book is equal parts memoir, travel writing, and psychological study, peppered with literary quotes and musings along with some tips and insights for solo travelers. She also writes about what we can do to enjoy and explore the places we live during the times in between travels, or if travel isn’t an option. Or how to just enjoy the moment, to find solace and enjoyment in simple everyday life.

We can’t always escape to Paris or Istanbul. Nor we do always want to. Savoring the moment, examining things closely, reminiscing — these practices are not strictly for use on the road. They’re for everyday life, anywhere.

Having lived in two of the cities she explores, one briefly and one for much of my life, I found myself agreeing and disagreeing with her impressions and experiences in equal measure. It’s hard not to view writing like this through the lens of personal experience. I had a lot in common with her Paris observations, but her Manhattan story felt uncomfortably privileged and almost simplistic considering all that that city encompasses.

I guess at times, to me, it felt like a little bit of that somewhat tone-deaf privilege that often crops up in certain New York Times writing came through too strongly. I may also have been more aware of it than usual because I was reading Just Mercy at the same time as this book, and everything else took on a frustrating, meaningless quality – the world of material things and self-indulgence just pales and fades away under the walloping impact of that book.

And yet, other times, I found myself surprised that Rosenbloom not only did certain less-than-luxurious things but that she wrote about them so well. I absolutely loved the entertaining, relatable way she described eating a McDonald’s sandwich in Paris, but still enjoyed an expensive meal in a fine restaurant during the same trip. She strikes a comfortable balance between simple, cheap comforts that are surprisingly fun in foreign countries with selecting personally meaningful ways to treat yourself when possible.

I think at a different time in my life, Alone Time would have been a book I very much needed, because it gently helps you learn things about yourself and how you can move in the world that aren’t always so obvious. Namely, that even as a woman, you should have every confidence in stepping out into the world alone, including traveling without fear, loneliness, or inhibitions. I learned that lesson myself, maybe in a harder, less polished way, but Rosenbloom’s writing helps underscore and emphasize it, intelligently and helpfully. It’s an excellent resource for someone who could benefit from these kind of lessons.

Sometimes her explorations, sightseeing points and descriptions of what filled her loose itineraries interested me, elsewhere they didn’t. I found this was one I appreciated more thinking about it afterwards than I did while reading it, maybe because afterwards I could think more about it in relation to my own experiences, and that’s how a book like this can really speak to you. Where it shines is in her descriptive ability and observations, and the way she ties these into psychological or literary concepts.

She spends time addressing the little and sometimes much bigger benefits of traveling by yourself:

Alone, you can pick through the sidewalk crates of used books without worrying you’re hijacking your companion’s afternoon or being judged for your lousy idea of a good time. You need not carry on polite conversation. You can go to a park. You can go to Paris.

This includes addressing loneliness and all the complicated emotions wrapped up in it: “For many of us, solitude is something to be avoided, something associated with problems like loneliness and depression.” Rosenbloom argues that it’s important to differentiate between loneliness and being alone, the former of which is obviously negative and the latter holding limitless possibilities for exploration, freedom, and autonomy, particularly if combined with the exhilaration of being in a new place, wandering through an unknown city as you get to know it. “Alone, there’s no need for an itinerary. Walk, and the day arranges itself.”

Walking alone in a city that’s not my own, I think of what Virginia Woolf wished for the women in Cambridge who came to hear her speak in 1928. “By hook or by crook, I hope that you will possess yourselves of money enough to travel and to idle,” she said, “to contemplate the future or the past of the world, to dream over books and loiter at street corners and let the line of thought dip deep in the stream.”

Much of the book’s psychological insights focus on breaking out of the comfort zone that inhibits many from embarking on solo travel, or even from doing something like eating alone in a restaurant. Rosenbloom acknowledges but challenges these common feelings, asking, “Must we do things that make us uncertain or uncomfortable?” and quoting scientific and psychological studies that encourage and enumerate the benefits of branching out of comfort zones, particularly when alone.

She also returns to a concept of how much just the anticipation of upcoming travel can be psychologically beneficial, citing a claim that anticipation is “joy already in the bank”. I loved that concept, and the idea that it’s great to get lost in daydreaming about something you’re looking forward to – that it’s actually healthy in its own way.

I wondered how she would address the issue of being a woman traveling alone, because no matter how confident or prepared a woman can be, there are, unfortunately, inherently special dangers we face and considerations to keep in mind when traveling solo. She discusses it in a literary way, sharing her own experience as the barometer she knows, which seems to amount to being aware but allowing yourself to be adventurous, and just trying to manage the anxiety that accompanies women merely walking by themselves sometimes:

You walk, unsure of whether your uneasiness is an intuition of actual danger, or if your mind is merely spooling some noir fantasy. Being on your own can easily become chiaroscuro, an interplay of light and darkness. One night, you’re walking alone, imagining being plunked on the head and dumped into the Arno with fifteenth-century Dominican friars and Rauschenberg’s early works. Another night, you walk carefree through shadows.

In a relatively short book, Rosenbloom manages to be detailed and descriptive but still streamlined, and packs a lot of topics together surprisingly neatly.

A city is different things to us at different times–of the day, of the year, of our life.

With its pop psychology mix of research studies and quotes pulled from here and there and interspersed throughout stories of Rosenbloom’s experiences in four cities over four seasons, capturing some of the flavor and personality of each, it imbues meaning in the seemingly mundane, and highlights the psychological and emotional benefit that can be gained from solo travel.

3 thoughts on “The Subtle Joys of Traveling Alone”