Image of Workers’ Party of Korea Monument in Pyongyang by Mannen av börd, edited by Entheta (Own work) [GFDL (http://www.gnu.org/copyleft/fdl.html) or CC-BY-SA-3.0 (http://creativecommons.org/licenses/by-sa/3.0/)%5D, via Wikimedia Commons 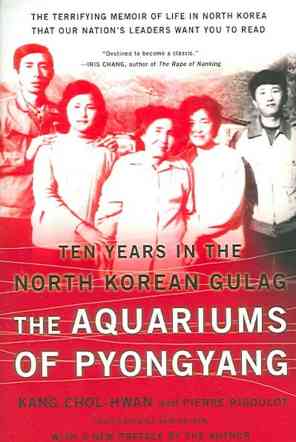 During the first days of my detention, I met a kid who wore black socks. At least that’s what I thought until I realized his socks in fact were an incredible layer of dirt and grime. I, too, would one day wear such ‘socks’.

Aquariums of Pyongyang was the first North Korean defector memoir I’d read where the author had spent time in one of the Gulags, and it’s absolutely terrifying. Like Masaji Ishikawa’s family, Kang Chol-Hwan’s family also returned to North Korea from their established home in Japan. His grandmother was fiercely devoted to North Korea’s brand of Communism, and wanted to live there and participate in what she saw as the country’s correct mode of governing.

This eventually led to the imprisonment of nearly the entire family, children included, in Yodok, one of the country’s notorious Gulag prison camps. The majority of the book details their lives, deaths, and unimaginable struggles there.

The routine for my sister and me was school in the morning and manual labor in the afternoon. There would also be the common chores of chopping wood and hauling logs, growing corn, pulling weeds, and so forth, as well as obligatory participation in the Party’s recently initiated campaign for the foraging of wild ginseng in the mountains, a project sure to be “close to our hearts,” given our desire to redeem our bad conduct. CHILDREN.

After a decade in Yodok, my knowledge of the camp boils down to this: of Yodok’s ten villages, four were for redeemables and six were for irredeemables, or political criminals…The irredeemables were all lifers. They knew they were never leaving the camp. No matter how long their hearts continued to pump, or their lungs to breathe, they would never again live as citizens. Their children, too, would suffer this fate. As the official propaganda never tired of reminding us, it was necessary to “desiccate the seedlings of counterrevolution, pull them out by their roots, exterminate every last one of them.”

Those irredeemables didn’t even have to display the obligatory portraits of the Kims, nor did they receive the brainwashing educational training on the dictator family and their “accomplishments” for Korea. Irredeemables are considered too far gone to bother trying to keep them indoctrinated.

His grandmother, upon seeing the traditional candies he received for Kim Il-Sung’s birthday, says, “We gave them everything we had, and in return we get years in the camp and a few cheap candies. There’s something to celebrate.” As Kang describes, her once-staunch faith in the Worker’s Party was long gone. With the glimpse he provides into the grim realities of life in prison camp, it’s hardly a surprise.

Upon finally escaping and reaching China, he experienced what so many North Korean defectors have described: “China was like a paradise, and I began to sense the huge gulf separating the universe as I knew it and the world as it might actually be.”

That’s so hard for me, and for I think anyone from a country that allows unfettered access to information and multiple perspectives of any story. I can’t fathom what he felt.

In Seoul, he became involved in the Christian community, and in fact near the book’s beginning he expresses his belief that God wanted this story to be told. I’m always uncomfortable with this, and although it doesn’t come up much as a topic besides these two instances, to know that it’s underlying bothered me. When I read what he and his family endured, what they survived and triumphed over, how far they’ve come with some members finally living abroad and becoming awareness activists – as the author himself has done – I feel a little disappointed when they credit everything to God without giving more credit to themselves and what they achieved, against impossible odds.

He even explains quite illuminatingly why religion beckons so strongly to people in his position:

Religion is very attractive to North Korean renegades. The atmosphere of quasi-religious adoration in which we were raised in North Korea only partially explains this phenomenon; more important, I believe, is the thirst for affection – for love, even – every renegade feels.

What bothered me about the book was the cool, distant remove that he tells his story with. These were painful, emotional events, yet there’s an almost dry tone to the storytelling. Some of this may be from the translation, as this was translated from French, but I’m hesitant to blame it all on that.

Also, there’s a troubling passage in the introduction where he says that he believes former President George W. Bush was guided by God to read his book and bring his message to the West. Just a world of no. I’m as thrilled as anyone that George Bush read a non-picture book and was moved by it, I wish our current president would do the same (if he’s even capable) but I hate that tendency to throw every positive occurrence under the umbrella of God’s will did it all, it was meant to be, #blessed.

Verdict: 3/5. Fascinating and extremely rare perspective from inside the North Korean camps, scarily, hauntingly descriptive, but the storytelling lacked somewhat.

10 thoughts on “Inside the North Korean Gulag”