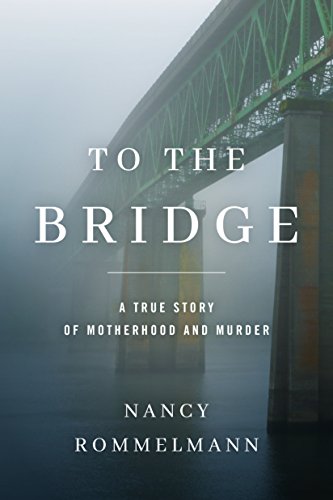 Book review: To the Bridge, by Nancy Rommelmann
Book Depository

Journalist and author Nancy Rommelmann found herself captivated by a disturbing news story. Young mother Amanda Stott-Smith had, in the early morning hours of May 23, 2009, driven to the Sellwood Bridge in Portland, Oregon and dropped her two young children into the Willamette River below. The elder of the two, seven-year-old Trinity, survived. Four-year-old Eldon didn’t make it.

Acts like this immediately draw an almost knee-jerk response of being labeled incomprehensible, wholly incompatible with our idea of motherhood. But as Rommelmann puts it, referring to a statement made in court proceedings after the incident, “‘Truly incomprehensible’… put a period on curiosity.”

What had brought her to the bridge, to a place where she thought the right decision was to murder her children?

Rommelmann acknowledges that this is undesirable territory for storytelling, and yet makes a strong case for why the story needs told anyway. It’s far too easy to throw stones, our instinct in a heinous case like this, and then turn away from the ugliness of it all without trying to understand anything more about the reasoning. Because whatever happened, whatever the why is – there is a reasoning behind it.

The argument here isn’t at all that Amanda deserves sympathy – and neither does she earn it – but rather to acknowledge that this event didn’t occur in a vacuum. We owe it to our own understanding, let alone to those involved, to look deeper instead of following natural instinct to label it “incomprehensible” and look away.

I do not look away, because there is logic here, twisted logic, to be sure, but in the eyes of the perpetrators, logic nonetheless. We know this because they killed their children. At some point, whether a year prior or a minute before, these parents looked at what they perceived to be their options and decided their children would be better off dead.

And unfortunately, deaths like Eldon’s aren’t rare occurrences. The meticulous research here serves to underscore how important an examination of incidents like this really is – it’s not nearly as uncommon as we’d like to comfort ourselves by believing.

Unless a filicide, the killing of a child by a parent or stepparent, is committed in public, we may not hear about it at all, the circumstances of anonymous people killing their kids too tawdry, too sad, too, somehow, private to report on. The news you read this week is unlikely to include ten children being murdered by their parents.

Yet that’s the statistic. What Rommelmann lays out in this book about filicide is hard – and painful – to believe but true.

And the main premise is setting out to uncover what happened in Stott-Smith’s life, and in the family household, leading up to the bridge.

The Stott household was the picture of middle-class placidity, but it didn’t matter how ordered your life was; murder flew in like a brick through a window and no one was ever ready.

Through extensive research, public records, attending court appearances, and myriad interviews with friends, family, colleagues, and various people connected to Amanda and her estranged husband, Jason Smith, Rommelmannn reveals a complex and disturbing series of dysfunctional behaviors and odd little mysteries. The narrative unfolds slowly and ominously – the storytelling is layered and rich with description and scene setting, always with an unsettling undertone. It meanders through history and switches time and perspective, so that our understanding of past events and personalities builds alongside the present-day progression of legal proceedings and aftermath for the families involved.

It’s excellent narrative true crime that focuses on telling a more nuanced story. I found myself thinking about it often – dwelling, almost – when I wasn’t reading, and it’s page-turning despite its slow burn. At times it’s almost uncomfortably intimate, and the level of detail is staggering and sometimes heavy, but it serves the purpose of showing how much more there is to a story that seems cut-and-dried and “incomprehensible”.

Neither Amanda nor Jason gave interviews themselves, but the picture of a troubled, unhealthy relationship emerges clearly from multiple accounts. It’s also clear that the factors at play that eventually led, or at least contributed heavily, to this desperate attempt of Amanda’s for attention are many, and they weren’t entirely unexpected.

Amanda had been moved off the stage. And then she did something that put her front and center.

In this case, both Smiths had had run-ins with child services, domestic violence allegations and reports, and every time caseworkers had dropped the ball for varying reasons. It’s even been admitted that the agencies involved made grave errors. “The eventuality was unthinkable to Amanda’s family. But they did see it coming; they just didn’t know what it was.” Her family thought she’d be a danger to herself, not her children. But this is what’s so terrifying – this didn’t happen out of the blue, with a stunned friend or relative swearing they never knew their loved one was capable of such violence. So many signs and problems were at play here. Each reveal of one makes the family’s messy, troubled narrative all the more disturbing.

Rommelmann followed the case from the beginning, and often her questioning or presence were unwelcome. I understood this, as she did too. One long-time friend of Amanda’s contacted her to say, “the last thing she needs right now is a book written about ‘the crazy mom who threw her kids off the bridge.'” This seems to be the stance taken by several close family members on both Jason and Amanda’s sides. As Amanda’s lawyer explains, imagine how you would feel if someone wanted to write a book about the worst day of your life. I’m sure that’s why Amanda refused any contact or input. But Rommelmann makes it clear that was never her intention – to play up the scandal and ignore the underlying psychological reasons, and that’s what sets this apart from more salacious crime narratives.

It’s probing but never sensationalized, and tamps down the scandalous aspects as much as can be expected, considering the subject. Psychology and cause and effect are the focuses here. Rommelmann also presents her observations carefully, with well chosen commentary, but leaving the reader to consider the bigger questions alone. That makes this a challenging – in the best of ways – read.

This is a true story, with complex motivations, reasoning, manipulation and abuses – so much more than the headlines allowed. It’s easier simply to say this was evil. It’s much harder, and demands more of the observer, to look closer and ask why.

To the Bridge:
A True Story of Motherhood and Murder
by Nancy Rommelmann
published July 1, 2018 by Little A

10 thoughts on “Arguing Against “Incomprehensible” When a Mother is Responsible”