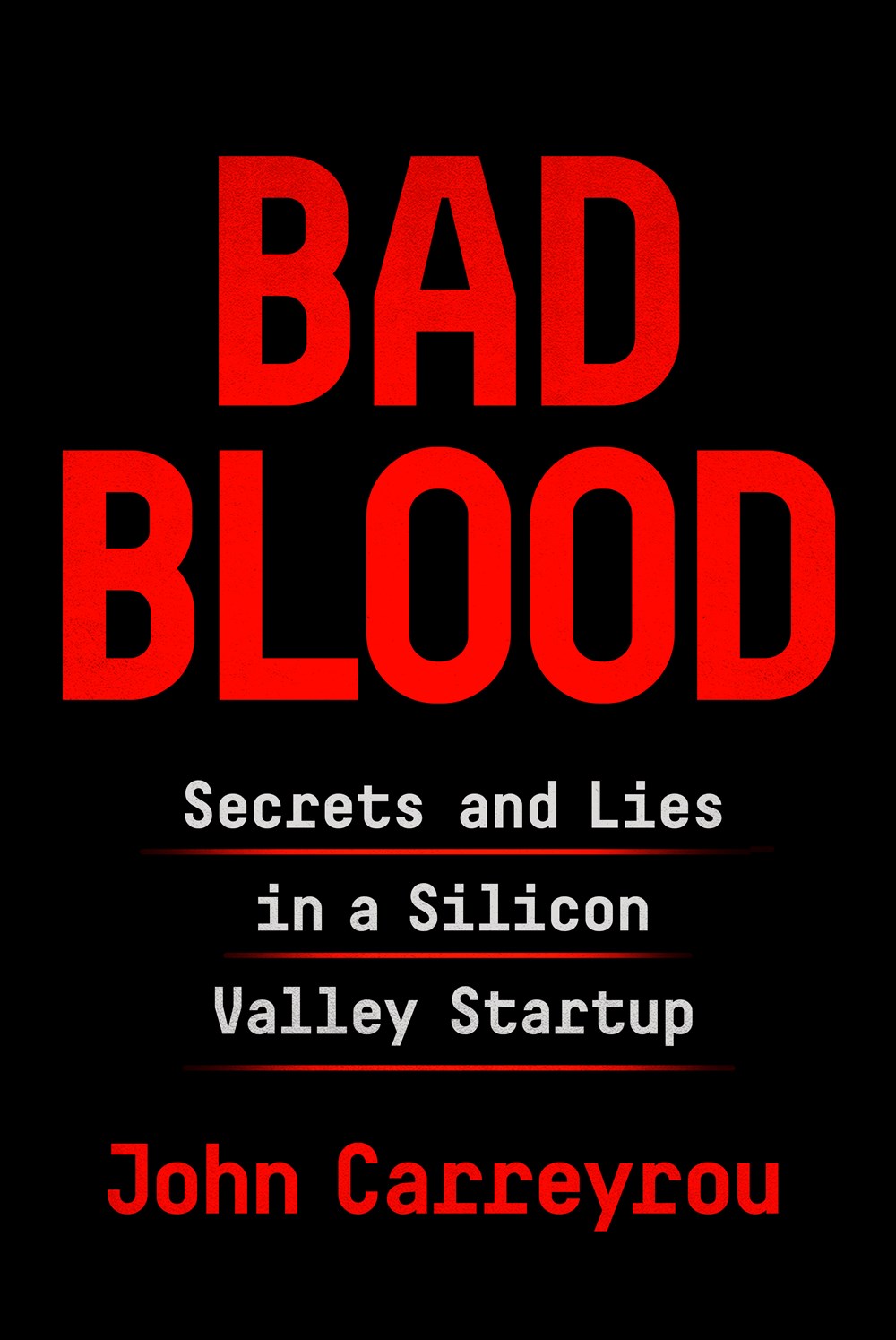 Her emergence tapped into the public’s hunger to see a female entrepreneur break through in a technology world dominated by men. Women like Yahoo’s Marissa Mayer and Facebook’s Sheryl Sandberg had achieved a measure of renown in Silicon Valley, but they hadn’t created their own companies from scratch. In Elizabeth Holmes, the Valley had its first female billionaire tech founder.

Stanford dropout Elizabeth Holmes was a Silicon Valley wunderkind. Barely into her twenties, she’d founded a so-called “unicorn” – a startup valued at more than $1 billion. The company hit $9 billion at its peak, and Holmes personally had a net worth of nearly $5 billion at one point, holding ownership of just over half the company. She’d snagged in-store clinic deals with major clients like Walgreens and Safeway, had stirred interest from the US military, and had investors and backers including former secretary of state Henry Kissinger, media mogul Rupert Murdoch, and former Marine Corps General James Mattis, among numerous other influential former high level government officials.

What she didn’t have was a viable product. Theranos (from therapy + diagnosis), her company, began with the seed of an idea: the ability to draw small amounts of blood for medical testing without using hypodermic needles. “Reader” devices, into which cartridges containing the minute finger-stick blood samples would be slotted, would check the samples for a myriad of illnesses or values, as well as being able to relay information to patients’ doctors about how medications were working – whether dangerous side effects were occurring or dosages needed adjustment, etc. The list of functions these devices were to be able to perform was massive, and all of it done by a device small and portable enough to be easily used in patients’ homes. Not to mention allegedly faster and more accurate results than traditional lab testing.

Except that the technology didn’t work. The components Elizabeth insisted on – the small size, the minute quantities of blood drawn by finger-stick instead of venous draws, and the dilutions necessary in order to even be able to work with such a small sample, the design, all of it – malfunctions and impossibilities were rife. But you wouldn’t know it from Elizabeth, or her second-in-command, Ramesh “Sunny” Balwani – they insisted on the accuracy and capabilities of the devices in public, to their employees, and to investors. They lied and defrauded investors and customers – end customers being real people, suffering from illnesses or trying to get properly diagnosed, sending some into panics over inaccurate results indicating serious illnesses like cancers.

A sample of how some Theranos employees viewed their tasks: “At heart, both were engineers for whom patient care was an abstract concept. If their tinkering turned out to have adverse consequences, they weren’t the ones who would be held personally responsible.” Others did care about their work and its accuracy, leading to a suicide connected to legal proceedings against Theranos.

This isn’t even touching on the terrible management techniques, the constantly revolving door of staff, and the aggressive, abusive tactics Holmes and Balwani employed in both managing employees and their treatment after leaving the company. Anyone who questioned or challenged Theranos’s claims, abilities or their veracity was threatened, fired, sued, and stalked.

The story here is an undeniably juicy but chilling one, full of deceit and deceptions that boggle the mind. In the age of information we live in, this level of fraud doesn’t seem possible and the scope of the disaster makes the book near impossible to tear away from. Wall Street Journal investigative reporter John Carreyrou has been investigating both the public and behind-the-scenes activities of Theranos and Holmes for years. He was contacted by nervous sources, former Theranos employees, and broke the story of the company’s fraud in 2015. A few months ago Holmes was charged with defrauding investors by the Securities and Exchange Commission.

Unfortunately, there’s no word included from Elizabeth herself, beyond what’s filtered through others. That’s understandable – Theranos is powerfully litigious and employed a scorched earth campaign in handling ex-employees, intensifying it for those who spoke to Carreyrou, so her transparency wasn’t to be expected. Elizabeth comes across as defensive and aggressive and not particularly willing to apologize or admit mistakes, so her refusal to be interviewed wasn’t surprising but did leave a gap. We can guess at her motivations, especially through what we see of her background and stark ambitions for wealth and renown, her idolization of Steve Jobs – but even this is precious little beyond just the replays of her behavior that make up most of this story.

It’s also a shame that the first female entrepreneur to found and run a unicorn was perpetrating a scam, but I didn’t have the impression that either her downfall or Carreyrou’s pursuit of the truth about her company and doings was motivated by her gender, as some have claimed.

For the most part remaining fact-based, I was troubled in a few spots by some language that felt tired in terms of women in power. Like: “If what Alan was saying was true, this added a new twist: Silicon Valley’s first female billionaire tech founder was sleeping with her number-two executive, who was nearly twenty years her senior.”

Elizabeth’s relationship with the sleazy-sounding and manipulative Sunny was kept secret from her board and investors, and that’s absolutely a problem. But I didn’t like Carreyrou’s phrasing here, which strikes me as flippant. Sleeping with someone isn’t the same as having a long-term relationship, which she did, and what’s a 20-year age difference if there are no underage parties involved? Focus on the real problems, which is that she hid it, and put her partner, a threatening and aggressive person, in powerful positions he clearly wasn’t qualified for, as some engineers demonstrate to hilarious effect (objectively hilarious until you remember this is a healthcare company run by people completely inexperienced in that field). That’s what should be condemned.

Hyping your product to get funding while concealing your true progress and hoping that reality will eventually catch up to the hype continues to be tolerated in the tech industry. But it’s crucial to bear in mind that Theranos wasn’t a tech company in the traditional sense. It was first and foremost a health-care company. Its product wasn’t software but a medical device that analyzed people’s blood. As Holmes herself liked to point out in media interviews and public appearances at the height of her fame, doctors base 70 percent of their treatment decisions on lab results. They rely on lab equipment to work as advertised. Otherwise, patient health is jeopardized.

The book primarily covers the evolution of Theranos, and how and why their technology failed, which was brilliantly illuminating. Carreyrou explains it so clearly and understandably – possibly because he admits when first interviewing Alan Beam, his initial contact for the story, he didn’t understand why certain technologies or procedures were or weren’t possible himself. What results is such a great education in Silicon Valley culture, particularly the healthcare and medical technology sector, and I really mean it – it’s fascinating. Carreyrou employs that perfect narrative nonfiction style that makes this read like a riveting page turner instead of an impenetrable study in startup tech gone wrong.

“It was as if Boeing built one plane and, without doing a single flight test, told airline passengers, “Hop aboard.”

What I didn’t learn was how Elizabeth managed to be so convincing with so little proof of her products’ success to back her up. She’s referred to as charismatic and wrapping people around her finger. But she’s also described as stiff, guarded, is undeniably an incompetent, insensitive manager, and doesn’t come across as personable whatsoever. So it was a leap for me to understand how she’d won over her investors allegedly on the power of her persona. And even then, it can only go so far. We learn of a faked test performed for Novartis in Switzerland, with an employee beaming fake results from California to the devices she was demonstrating for the pharmaceutical company.

Maybe she really did win everyone solely on the strength of the innovation and the promise. Maybe the hope was really that great.

And yet Safeway was still hesitant to walk away from the partnership. What if the Theranos technology did turn out to be game-changing? It might spend the next decade regretting passing up on it. The fear of missing out was a powerful deterrent.

I couldn’t help but see parallels between Elizabeth and Sunny’s obsessive demands for loyalty in the face of opposing truth and the current administration, with Trump demanding unwavering loyalty, Mafia-style, from the FBI director and firing him when he refused. The constant staff turnover is another red flag the two share. As is Elizabeth’s paranoia over loyalty leading to her hiring her brother, who has no experience in the field (neither does she, only a few semesters of chemical engineering courses and no medical background):

“Christian Holmes…had no clear qualifications to work at a blood diagnostics company, but that mattered little to Elizabeth. What mattered far more was that her brother was someone she could trust.”

Theranos is basically the Trump administration of Silicon Valley. Absorbing, well written and informative look at the machinations behind a startup that conned its way to the top and how and why it all went wrong, but disappointingly little about the motivations of the person responsible. almost 4/5

Bad Blood: Secrets and Lies in a Silicon Valley Startup
by John Carreyrou
published May 21, 2018 by Knopf