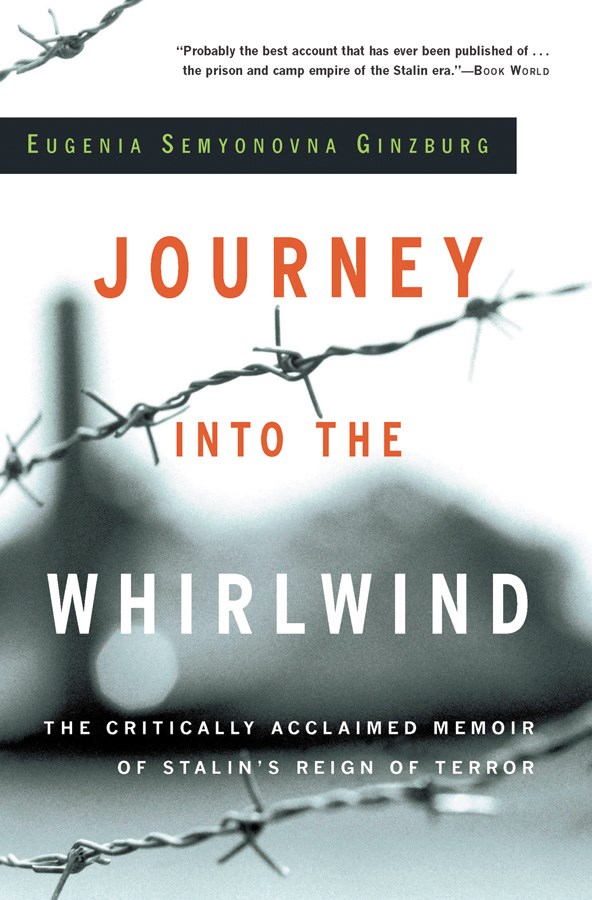 Book review: Journey into the Whirlwind, by Eugenia Semyonovna Ginzburg

I opened the door briskly, with the boldness of despair. If you are to jump over a cliff, better take a run at it and not pause on the brink to look back at the lovely world you are leaving behind.

Eugenia Ginzburg’s memoir of her arrest in 1937 on charges that eventually became “terrorism” against the Soviet state based on association with an arrested acquaintance is perhaps the most famous among the gulag memoirs. Anne Applebaum quoted it often throughout Gulag, her definitive history of the camps, and after I got through that book some years ago, Ginzburg’s seemed a good choice to see the topic from a more personal perspective. I’d bought a dusty used copy years ago and left it sitting on my shelf, thinking of course I’d read it one day, I just was never quite in the mood for it. I even read two other memoirs from the gulags, one from the writings of a meteorologist prisoner and one from a guard, in the interim.

What a mistake waiting was. Although haunting and emotional, Journey into the Whirlwind isn’t a taxing story that you have to brace yourself for. It’s so gorgeously written, so expressive and strangely – I know this is an odd word to use here – uplifting, that it’s an excellent stand-alone memoir, regardless of its place in a literary genre like prison camp accounts or even Soviet history.

Ginzburg was a literature professor so it’s not surprising that her writing and her thoughts are peppered with bits of poetry and references to literary works, but this is also a standout in terms of writing. Even in translation (managed to finish this in time to make one more entry for Women in Translation month!) it’s evocatively, movingly written. Her story and things she endured and witnessed brought me to tears but just as many times I found myself laughing at instances of black humor (a necessity, she explains, for surviving with one’s senses intact) and awed by the strength and bravery she and others show.

My only disappointment is that the book ends abruptly, with a brief afterword from a few years after her imprisonment ended, as she expresses her relief that “Leninist ideals” returned, Communism without the cult of personality is restored, and this terrible time of persecution they endured is now over. It’s astonishing to me that after all this, some still believed in the system that put them there in the first place, something I saw in Stalin’s Meteorologist even as its author faced death.

I’d always been under the impression that this book covered Ginzburg’s time in Kolyma, the infamous Siberian gulag, but only the last quarter or so at most does. It’s primarily about her arrest, interrogations, and imprisonment in Kazan and Moscow before her eventual conviction on terrorism charges and transport to the east. She has an incredible eye for detail and paints this entire time vividly, not to mention an enviable memory and recall. She even mentions how her memory was strengthened by her time in solitary confinement and how that contributed to survival too.

What comes across most strongly in her account of her wrongful imprisonment on trumped-up charges, a not uncommon occurrence as more and more figures enter the narrative, is the incredible strength of spirit and endurance Ginzburg displays. She’s been separated from her elderly parents, her husband, her young children, given an excessively harsh sentence for a nonexistent crime, a sentence that we learn through her asides and afterword that ended up being even longer than the one initially handed down. And yet she finds joy in the smallest things and it’s clear they kept her going and for that I was in awe of her story.

The sky began to glow with wonderful shades of mauve and lilac: my first Kolyma dawn was breaking. I felt, all of a sudden, a strange lightness and acceptance of my fate.

I hadn’t even realized the book had a sequel, Within the Whirlwind, which must cover the bulk of her actual time in Kolyma, of which we see only the beginning here. It’s unfortunately a bit trickier to get a copy of, but not reading it after this one isn’t an option.

I love her writing, her observations, her analysis of her complicated feelings and behavior, and the incredible insight this shows into the era of Stalinist paranoia and persecution. Ginzburg shows more than any other account I’ve seen how the system was just eating itself – more than once her interrogators and jailers become the jailed themselves, Communist Party officials she’d clashed with end up imprisoned and a new kind of forgiveness despite unimaginable horrors and denunciations emerges from it all. Ginzburg repeats often, in one way or another, that she’s lucky not to have been sentenced to death, and maybe that’s why there’s so much surprising joy throughout her descriptions.

We still took pleasure in the fugitive mists of morning, the violet sunsets that blazed over us as we returned from the quarry, the proximity of ocean-going ships which we felt by some sixth sense – and in poetry, which we still repeated to one another at night…I felt instinctively that as long as I could be stirred to emotion by the sea breeze, by the brilliance of the stars, and by poetry, I would still be alive, however much my legs might tremble and my back  bend under the load of burning stones. It was by preserving all these treasures in our minds that we should resist the onslaught of the horrors around us.

All that’s not to say this isn’t deeply painful as well. Maybe I’m spinning it all too positively, but that’s the way it felt, that’s how her message came across – we know Ginzburg made it, she kept her sanity and integrity, and she’s able to give voice to so many other women and illustrate what was unfortunately a common experience of imprisonment, abusive interrogations, and exile.

Her fellow inmates were another fascinating aspect – the kind of sisterhood that formed among female prisoners. She’d been well-connected in her pre-prison life, and it’s first shocking, then reassuring how many people she knew who turned up during her journey. I don’t even know how to convey the magnitude of her story, of everything it encompasses, only to say that it’s an incredible document of the Stalinist terror as well as being a woman’s powerful, triumphant story, told with tangible description, the clarity of passed time, a rich literary voice and some much-needed humor as well as sensitivity. I stopped dog-earing and underlining eventually because every page has something exceptional to tell. 5/5