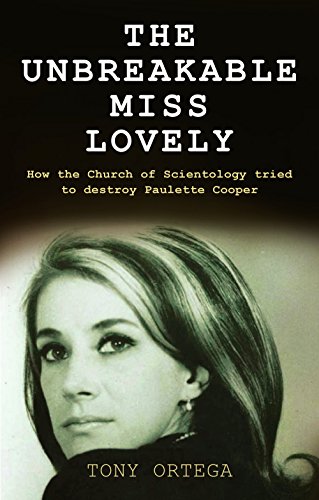 Journalist Paulette Cooper survived the Holocaust but she almost didn’t survive Scientology. That thought lingered while reading this biography and account of her years of harassment by the cultlike religion for daring to write honestly and critically about them.

Her parents suffered persecution as Jews in Second World War Europe and Paulette was lucky enough to survive, though they didn’t, and was adopted by a couple in Westchester, New York.

She grew up to be a journalist working in New York City. It was a strange encounter with a former colleague who’d gotten involved in the Church of Scientology and claimed to be the reincarnation of Jesus before nearly raping her that triggered her journalistic instinct and led her to begin researching and writing about Scientology. She published an article in 1969 and a damning expose in book form, The Scandal of Scientology, in 1971.

Journalist Tony Ortega, former editor of the Village Voice and himself a dedicated writer on Scientology, writes with Paulette’s close cooperation the detailed story of her decades of unrelenting harassment for daring to write about the church.

[Paulette] explained how she had gotten interested in Scientology, with a friend who had taken some Scientology courses and then got the idea that he was the reincarnated Jesus Christ. That led her to take a course as she began investigating Scientology and realized that it seemed to keep enemies lists on former members. And it struck her as odd that when she tried to track down an article about Scientology she found a reference for at the New York library’s card catalog, the article would usually be missing, cut out neatly from its magazine or newspaper.

Paulette became one of the most well-known examples of Scientology’s “Fair Game” policy. If you’re not familiar with this concept, let’s have L. Ron Hubbard explain it in a 1967 policy letter: “It described penalties for people that the church considered to be in “lower conditions.” At the bottom of that list were people the church considered to be the “enemy.” In that case, Hubbard considered them “Fair Game,” and they were subject to ruination: ‘May be deprived of property or injured by any means by any Scientologist without any discipline of the Scientologist. May be tricked, sued, or lied to or destroyed.'”

Basically, if you come at Scientology, no respondent deed is too dirty to defend the organization. Paulette found out just how far they would go: they planted people close to her, in her building and within her own apartment, one of whom seemed to have been coaching her towards suicide, and, their biggest plot – they obtained her fingerprint to facilitate an elaborate bomb threat plot against themselves and others. Which got the FBI involved, and led to complicated and stressful legal proceedings. The book is worth reading alone for the details of this terrifying, unbelievable bomb plot.

The goal of the so-called “Operation Freakout” was to land Paulette either in prison or a mental institution. They’re well known for pummeling opponents with lawsuits, hoping to cause enough stress and overwhelm their target with sticky legal proceedings and associated financial ruin. Just the thought of that makes me nervous. Their goals for breaking her emotionally and psychologically included dragging her parents into their plots, embarrassing and harassing them too. And this is tip of the iceberg.

The story of the increasingly escalating measures Scientologists took against Paulette and her reactions is enthralling. Not least because this is important to know, especially in our era of attacks on journalism. There just needed to be more of it. Whole pages consist of sentences chock full of names, dates, and facts, ultra-specific to the point of confusion, without greater shaping into a story. The editing left something to be desired – little things and awkward repetitions that if cleaned up would’ve made it more smoothly readable. Annoyances like this made some parts hard to read.

But the story at the heart of it is an incredible glimpse into the inner workings of Scientology, especially as L. Ron Hubbard and his then-wife Mary Sue were kicking the church’s practices into high gear in the 1970s. Another interesting thread was Paulette’s friendship and writing collaboration with Hubbard’s son, nicknamed “Nibs”, who later rejoined the church, creating even more paranoia about the people she allowed close to her during her ordeal.

Also interesting is the glimpse into the beginnings of Scientology’s war on the IRS, an organization that’s always been a particular sticking point for them and who they eventually blackmailed into obtaining their religious tax-exempt status. Here, the big story is their infiltration of IRS buildings, which defies belief but they did it. Anytime they needed inside information, like documents surreptitiously copied or stolen, they get someone hired inside the company or organization to do it. Scientologists can get hired anywhere! Why don’t they use their powers for good instead of evil and start a recruiting or coaching business? Unemployment would be ancient history.

A lesson to take from this is if you have beef with Scientology and suddenly a new, persistent friend shows up in your life, moves into your building, if someone new so much as drops a napkin near you to say hello – do not be friends with this person. Not to victim-blame, but it was unreal, and actually quite sad, that Paulette continued to trust people who befriended or wanted to work with her under the pretense of helping, but who were really Scientology plants. If they do one thing well (besides employment), it’s exploit your vulnerabilities and natural tendencies to trust.

Paulette questioned someone she worked with who allegedly wanted to engage her on a project “to bring Scientology down.” Language in the contract gave him permission to intercept her wire or oral communications. “It’s meaningless. Just standard language for a private investigator contract,”…She shrugged it off and signed.”

There are moments that felt like watching someone descend into the basement where they’d heard a strange noise in a horror movie. How could she fall for this repeatedly? But again, they took advantage of their targets’ inherent lack of paranoia and willingness to trust and cruelly turned them into shells of their former outspoken, brave selves.

Not Paulette though. She suffered a lot, she came harrowingly close to breaking, but she came out on the other side of the nightmare they created around her.

A fun little fact: Paulette was freelancing but she became poisonous to hire or publish thanks to Scientology’s scorched earth campaign, and the outlet that continued to give her steady work was the National Enquirer.

Maury Breecher considered Paulette Cooper one of his best reporters, but he and the other editors at the Enquirer also knowingly kept her income healthy in order to help her from going under while she fought Scientology. The newspaper never publicly received credit for it.

Neither did they ask for it, which I found admirable and surprising considering the source.

This book is full of such interesting tidbits, and worth the slog through some dry, densely name, date and fact-filled pages that don’t ultimately contribute much to the narrative, to learn more about one of Scientology’s most vicious Fair Game campaigns and the woman who incredibly, unbreakably, survived it. 3/5