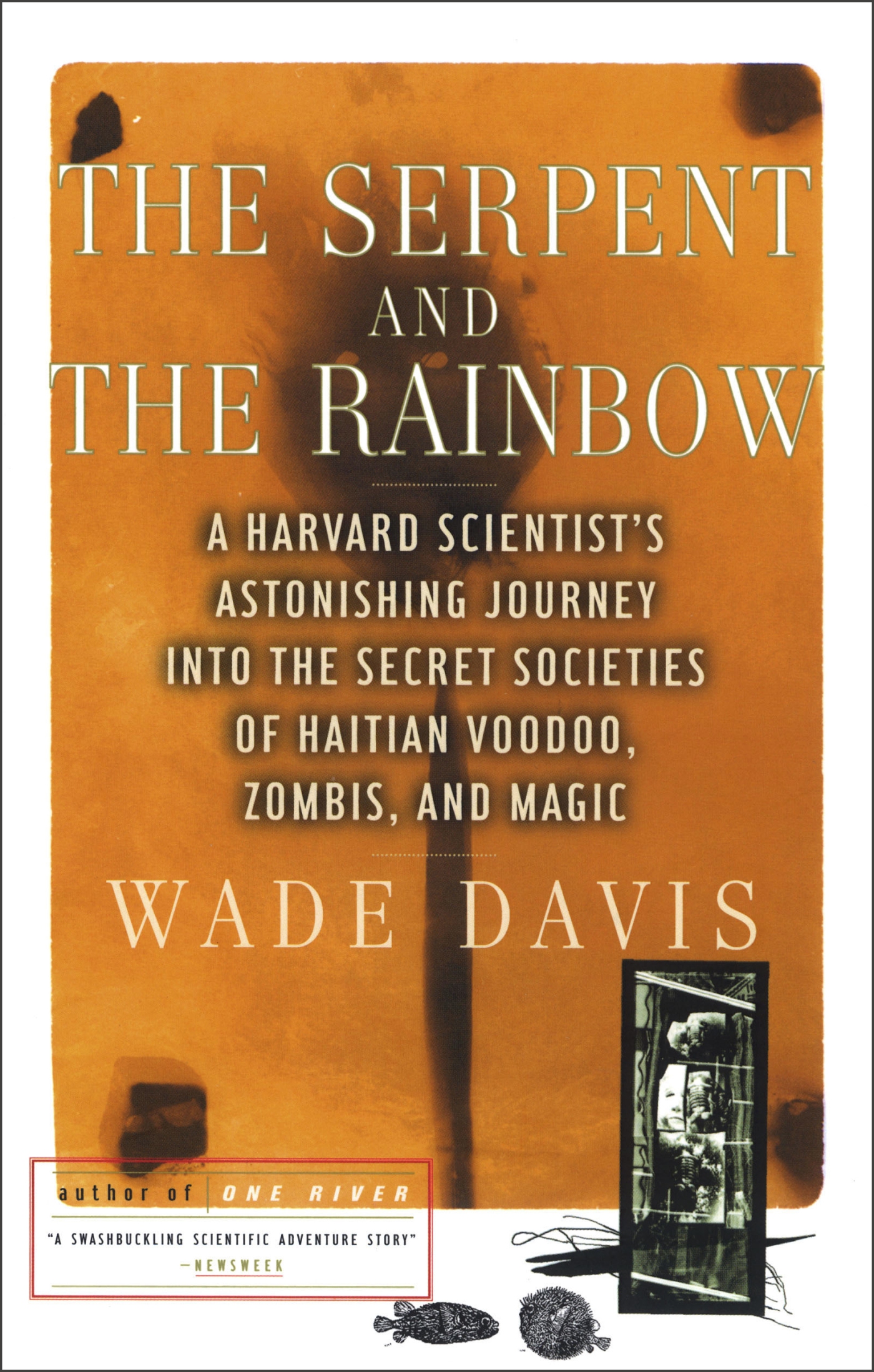 Book review: The Serpent and the Rainbow, by Wade Davis
Book Depository

The Serpent and the Rainbow is a modern classic, a story that flirts with a deep-seated fear out of one of humanity’s collective darkest nightmares – that of being buried alive, and of being raised to live as “undead”. But the book isn’t strictly horror. It’s a perfect example of reality’s scary stories being far more frightening than anything fiction can conjure.

Wade Davis, a Harvard anthropologist, was tapped by a psychopharmacologist and his researcher sponsors in New York to travel to Haiti in the 1980s, where it was rumored that voodoo practitioners were able to create zombis. “My assignment … was to find the voodoo sorcerers responsible, and obtain samples of the poison and antidote, observing their preparation and if possible documenting their use.” Multiple cases had been documented of men and women who had died, been buried, and later were sighted again in a horrible state – mute, emaciated, with limited mental capabilities, barely able to reintegrate into normal life after their “death” and reanimation .

Intrigued and puzzled, he begins the first of what would become multiple expeditions to the Caribbean where he begins to work through the scientific and medical possibilities behind the process of zombification. Describing one woman even after she’d undergone psychiatric treatment after being discovered in her “zombi” state, Davis writes: “There was little spontaneous emotion, and when she left the room she walked as if on the bottom of the sea, her body bearing the weight of all the oceans.”

What’s clear from the beginning is that a plant or animal-based substance is at the core of some medicinal preparation, one that doesn’t actually kill but induces a lethargic coma state. Then something has to be used after the “resurrection” – the removal of the zombie from the cemetery, an act Davis feels would hold important clues to the entire process – to maintain the zombie-like state. He initially hypothesizes that it may involve a poison created from datura, but quickly realizes something far more complex is at play. The narrative allows glimpses into his progressive thought process as he uncovers each new angle, all fairly hard-won thanks to pointed deceptions, trust issues and general difficulties on the part of the practitioners and his Haitian contacts.

A bokor, a malevolent sorcerer; or a houngan, a benevolent priest and healer? Beauvoir had pointed out the fallacy of any such distinction. Marcel, of course, was both, yet himself neither evil nor good. As bokor he might serve the darkness, as a houngan the side of light. And like all of us he was capable of serving both. The vodoun religion had explicitly recognized this dichotomy, and had in fact institutionalized it.

Davis’s tone as a narrator reminded me of those used by the narrators in horror classics like Frankenstein and Dracula. Perhaps especially in Dracula. It’s measured and educated, based on an insistent and careful scientific pragmatism that’s constantly challenged by the otherworldly beliefs and strict cultural structures surrounding the supernatural element, all intruding on a scientist’s confidence.

He’s adept at creating atmosphere – the descriptions he provides of people (“she lived with the brash confidence of a person who has never lost”), places, and ceremonies are wholly captivating. It’s hard to believe his background is as a scientist instead of a novelist when reading some of these atmospheric descriptions.

It does have its dry passages or chapters, but on the whole I found it easy to get lost in the heady atmosphere depicted. This is partly thanks to the menacing, sinister undertone that permeates the storytelling (again, reminiscent of the horror classics above).

Why and how a person is made a zombie – brought “to the frontier of death,” the phrase that haunts Davis, and how such victims are treated in Haitian communities after their discovery in a zombified state is inextricably linked with powerful religious beliefs. I think the rest of what’s revealed, of the drugs’ composition and effects, the procedures, and why it all happens is best discovered by reading it.

As a Western scientist seeking a folk preparation I had found myself swept into a complex worldview utterly different from my own and one that left me demonstrating less the chemical basis of a popular belief than the psychological and cultural foundations of a chemical event. Perhaps more significantly, the research had suggested that there was a logical purpose to zombification that was consistent with the heritage of the people.

Davis goes to great lengths both in his research and writing to tie history and cultural beliefs into the story he’s trying to unravel and tell. This is for the wider, entrenched belief system as well as how those beliefs affect modern daily life. Attending a showing of Raiders of the Lost Ark, he describes the pandemonium unleashed in the theater by the film’s climactic scene, interpreted as it is through the lens of supernatural beliefs: “It was a scene beyond anything in the picture itself.”

Cultural background, steeped as it is in magical beliefs and practices intertwined with religion; Haiti’s troubled, bloody history; and the social factors at play, including secret societies, are all crucial in understanding something of this seemingly supernatural but mostly explicable phenomenon.

A zombi sits on the cusp of death, and for all peoples death is the first teacher, the first pain, the edge beyond which life as we know it ends and wonder begins. Death’s essence is the severance from the mortal body of some elusive life-giving principle, and how a culture comes to understand or at least tolerate this inexorable separation to a great extent defines its mystical worldview. If zombis exist, the beliefs that mediate the phenomenon must be rooted in the very heart of the Haitian being.

The Serpent and the Rainbow:
A Harvard Scientist’s Astonishing Journey into the Secret Societies of Haitian Voodoo, Zombies, and Magic
by Wade Davis
published 1985 by Simon & Schuster

17 thoughts on “Recipe for a Zombie: Science Immerses in Haitian Magic”