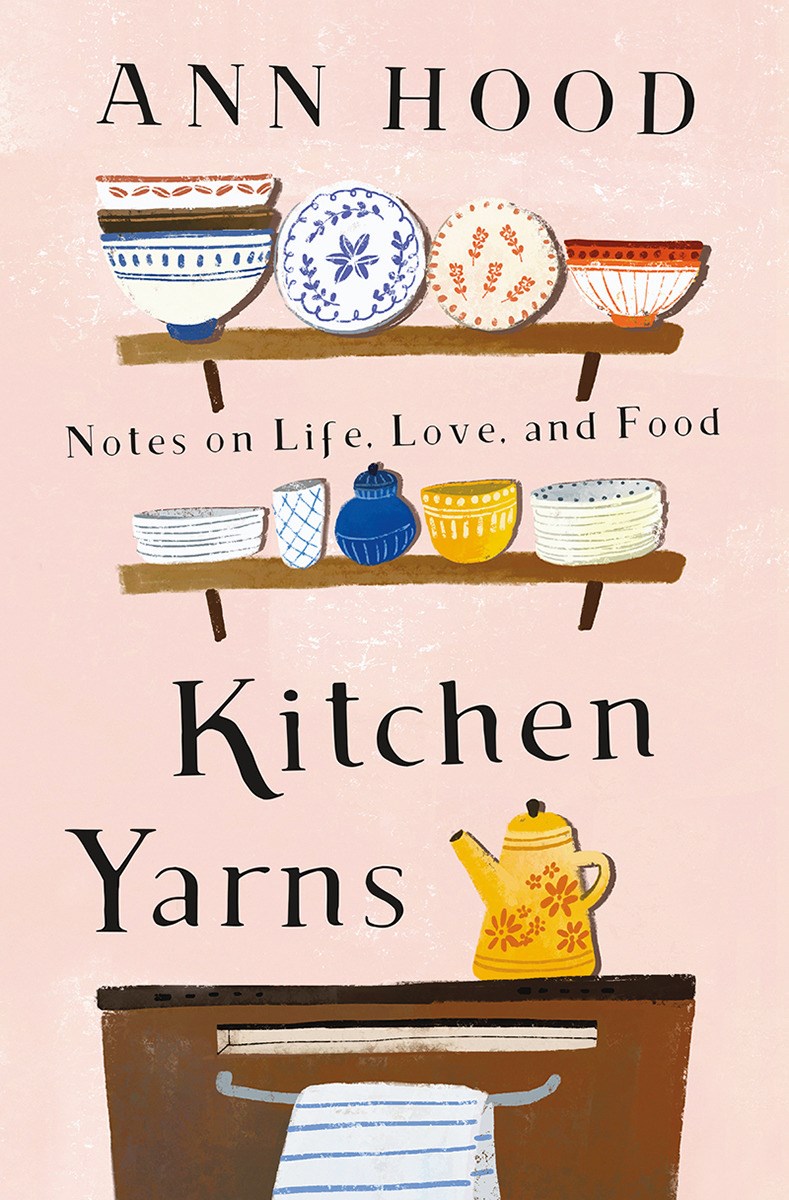 When I write an essay about food, I am really uncovering something deeper in my life – loss, family, confusion, growing up, growing away from what I knew, returning, grief, joy, and, yes, love.

Author Ann Hood is also a Laurie Colwin devotee, and her latest nonfiction essay collection, Kitchen Yarns, is beautifully similar to all that’s wonderful about Home Cooking and More Home Cooking. Hood writes sweetly and admiringly of Colwin’s legacy and how much the brief experience she had with her, years ago on a New York winter evening, meant to her. This book is clearly influenced by Colwin’s warm, funny and charmingly self-deprecating style, but it owes a lot to others as well – M.F.K. Fisher being another food writer who clearly inspired Hood, for one.

But Hood’s biggest influences are her family members, and she writes lovingly, nostalgically, and humorously about the connections between food, family, and life events both tragic and wonderful.

These essays are affecting, sweet (often bittersweet) stories of episodes from Hood’s life, childhood to present, framed around the meals someone was cooking for her, food associated with a particular moment, or that she was learning to cook herself at the time. I was hooked by one admission, because as a latecomer to cooking myself, this was exactly my situation too: “Even though I lived in a house filled with good food, no one ever taught me to cook.” Hood’s life in cooking spans the spectrum of hilariously amateur to admirably polished, and this was delightfully hopeful and quite funny at the same time.

She describes her father and his love of cooking despite not being particularly gifted in this area, her grandmother’s old-world-style Italian cooking for the whole family, and the many connections between her mother and food. This relationship with her mother is a predominant theme, as she explains that her mother passed around the time she was finishing the book, and the bittersweetness of fresh loss coupled with cherished memory permeates the stories in which she appears.

Humor is inextricably intertwined with nostalgia, like in “Confessions of a Marsha Jordan Girl”, where she captures the lightness of her teenage years when a little dream came true and she modeled for the Jordan Marsh department store. The culinary connection is in her recollection of their famous sugar-topped blueberry muffins, which she can’t help but tie to the sweetness and impermanence of youth: “Their taste lingers for a long moment before it is gone.”

She has a good sense for when levity is called for, because there’s often a strong current of sadness, the little everyday sadnesses found in many true life stories. Describing the loneliness of being single and alone in New York City, where she cooked to “stave off loneliness and keep sadness at bay”: Sometimes my sadness was so big I felt everyone I passed could see it. I think the stories Hood tells will speak comfortingly to those who’ve experienced similar.

Or just to those prone to sentimentality, like when she describes a dinner party that unexpectedly jogs a long-buried happy memory, along with the nostalgia and roads-not-taken that accompany such remembering: “Finally, I returned to this dinner party, dizzy for what I once had, what I never had, what I had hoped for.”

As is often the case, with success came a longing for home. We yearn so much to leave our small town, our childhood home, the familiar. Yet somehow once we’ve left it all behind, it beckons us back.

These essays are often like this – caught between a love of and joy in recalling the past and all that inhabited it, but a melancholy over the life that’s intervened in the meantime. In Hood’s case, this involves a failed marriage and a daughter who died suddenly and very young. She weaves these issues, serious and thorny as they are, into smooth meditations on life’s fragility and what she did to heal herself and her heart, including the kind of food she nourished herself with. “Perhaps the key to soothing my aching heart is American cheese?” being one such consideration, a lighter moment in an essay telling of grief. It’s the kind of reading that you think will be painful but ends up being a balm for what ails you.

Kitchen Yarns is my journey from that family and that childhood through my early efforts at cooking – flank steak marinated in Good Seasons salad dressing to impress a boy I liked in college; pesto made with two cups of dried basil – to diligently copying recipes from The Silver Palate Cookbook as a young single woman living in New York City to trying to make the perfect spaghetti carbonara, like the one I ate in Rome on a layover as a TWA flight attendant.

As a collection, the essays can feel disjointed, as if they were written for separate publications. This is mostly because specific themes and details are repeated a few times. But it’s a minor criticism, I liked her stories enough that it just ended up making me wish there was broader material.

Somehow both heartbreaking and heartwarming, deeply thoughtful and often hilarious, Hood writes about how the pieces of your life can fall apart completely but still manage to be put back together. She’s no stranger to hardship but it’s clear she hasn’t let it make her bitter, and her writing on the nostalgia for youth, innocence, family who have passed and relationships that went sour, alongside the sweetness of those around us and the love that follows heartbreak, is joyful and celebratory instead of oppressive or melancholy. I was sometimes devastated along with her but ultimately, the message is entirely uplifting. 4.5/5

23 thoughts on “Kitchen Connections to Grief, Joy, and Growing Up”