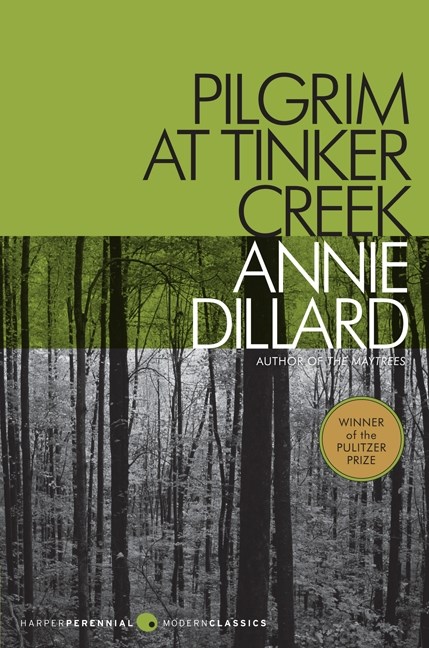 I used to have a cat, an old fighting tom, who would jump through the open window by my bed in the middle of the night and land on my chest … And some mornings I’d wake in daylight to find my body covered with paw prints in blood; I looked as though I’d been painted with roses.

Those lines open Annie Dillard’s 1972 Pilgrim at Tinker Creek. I knew immediately that this piece of writing, which won the Pulitzer Prize, was going to have a great impact on me, as it has so widely in the decades since its release.

It’s difficult to categorize – it’s memoir, to some extent, although Dillard only reveals herself through her observations of the natural world and the philosophical thoughts it inspires. In an afterword she admits that she didn’t want to identify her gender when publishing, well aware of a tendency among men not to read the work of women writers.

This struck me as a remarkable achievement – to write something that’s somehow deeply personal, yet could leave readers unsure about the author. I appreciated it more because as much as I love memoir, I’ve read many that are ostensibly about a specific event or external topic but spent more time navel-gazing or dissecting relationships than forming thoughts about bigger ideas or the incident at hand. Considering this, Dillard’s work, personal and universal as it manages to be, is even more impressive.

It’s nature writing but, speaking as someone who’s so-so on nature writing, it’s not the kind to avoid if you aren’t enthusiastic about the genre. It doesn’t get impossibly bogged down in metaphor and the metaphysical, although those are used. She weaves in scientific ideas, ecology, biology; in addition to psychology and philosophy, and most affectingly, the simplistic power of mere observation. She observes, “a transparent eyeball” as she calls it, and tries to make sense of it. “Perhaps … I might write about the world before I got tired of it,” as she explains her motivation in the afterword, along with calling this a young writer’s book, an idea I’ve been thinking about often since reading it.

The foundation is that Dillard was living in a valley in Virginia’s Blue Ridge, and she was young and curious about everything – the natural world around her and the academic writings on philosophy, literature, religion she consumed. She has enviable patience, sitting quietly by the side of the water for hours, watching the tiny, intricate movements of life and nature busily working around her.

The observations that come from this, which she applies to greater ideas of life, our place in the world, or marveling at how wonderfully, almost incomprehensibly complex that world is, are a treasure.

It’s lyrical, thought-provoking, and written in a voice so strong and distinct that it lingers in your mind. I won’t pretend that I grasped every reference or idea she proposes, especially as they’re sometimes couched in a dreamy but beautiful and surprisingly focused style of language, which makes it easy to get lost in the loveliness of the words and images she’s conjuring, and a little more difficult to focus exclusively on the references.

At times scenes could be from a nature documentary, as she documents the behavior of insects, pond life, the seasonal cycles of the forest. There’s so much humor too, a testament to her writing that she can smoothly switch topics and seamlessly blend so many different thoughts and ideas, both serious and light, together. “Fish gotta swim and bird gotta fly; insects, it seems, gotta do one horrible thing after another,” and “There are so many parasitic wasps that some parasitic wasps have parasitic wasps,” were favorites.

This was a book that even while reading, I knew I would be reading many times. Not only because there’s too much to absorb in a single read, but because I want to understand it better and I think it’s the type of text that lends itself to different interpretations and perceptions depending on your mindset when you come to it, where you are in life, what you’re looking for.

Some favorite lines (too many but a fraction – I can’t remember marking a book up so much):

“The cat and our rites are gone and my life is changed, but the memory remains of something powerful playing over me.”

“Today I sit on dry grass at the end of the island by the slower side of the creek. I’m drawn to this spot. I come to it as to an oracle; I return to it as a man years later will seek out the battlefield where he lost a leg or an arm.”

“The secret of seeing is, then, the pearl of great price. If I thought he could teach me to find it and keep it forever I would stagger barefoot across a hundred deserts after any lunatic at all.”

“All that summer conceals, winter reveals.”

“I’m getting used to this planet and to this curious human culture which is as cheerfully enthusiastic as it is cheerfully cruel.”

“It was a clear, picturesque day, a February day without clouds, without emotion or spirit, like a beautiful woman with an empty face.”

“It has always been a happy thought to me that the creek runs on all night, new every minute, whether I wish it or know it or care, as a closed book on a shelf continues to whisper to itself its own inexhaustible tale.”

“Several years ago our October woods would have made a dismal colored photograph for a sadist’s calendar: a killing frost came before the leaves had even begun to brown; they drooped from every tree like crepe, blackened and limp. It’s all a chancy, jumbled affair at best, as things seem to be below the stars.”

“I look at the mountain, which is still doing its tricks, as you look at a still-beautiful face belonging to a person who was once your lover in another country years ago: with fond nostalgia, and recognition, but no real feeling save a secret astonishment that you are now strangers. Thanks. For the memories.”

“But knowledge does not vanquish mystery, or obscure its distant lights.”

“Self-consciousness is the curse of the city and all that sophistication implies. It is the glimpse of oneself in a storefront window, the unbidden awareness of reactions on the faces of other people—the novelist’s world, not the poet’s. I’ve lived there. I remember what the city has to offer: human companionship, major-league baseball, and a clatter of quickening stimulus like a rush from strong drugs that leaves you drained. I remember how you bide your time in the city, and think, if you stop to think, “next year…I’ll start living; next year…I’ll start my life.” Innocence is a better world.”

34 thoughts on “Nonfiction Classic: A “Young Writer’s Book” on the Natural World”