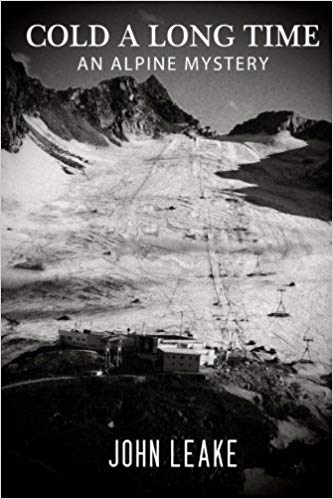 The anguish caused by a family member’s disappearance is difficult to describe …The unexplained absence of someone you love produces a void into which all normal life collapses. Though your panic will eventually subside, your all-consuming desire to know what happened will not. The mystery will preoccupy you until you find your missing family member or until you die.

An American journalist with years of experience working in Vienna, John Leake was contacted by the parents of a former professional Canadian hockey player, Duncan MacPherson. He’d disappeared in 1989 while snowboarding at the Stubai glacier in the Austrian Tyrol, a detour taken en route to starting a coaching job in Scotland.

The MacPhersons had spent twenty years trying to learn the truth of what happened to him, having been given the official but implausible narrative that he’d returned his rental equipment and left the ski slopes, so must have wandered off and died while hiking. Lynda MacPherson felt “a growing sense” that the local police weren’t conducting a thorough investigation. A Canadian businessman had even covered the cost of sending a search and rescue team after the Austrians gave up, but Duncan wasn’t on the mountain.

This would be a hard enough uncertainty to live with, but the mystery only compounded 14 years later in 2003, after Duncan’s body melted out of a glacier at the ski hill where he’d disappeared, piling on evidence of something strange and sinister that didn’t match official findings. At first the MacPhersons trusted authorities, but too much appeared wrong and off, both at the time of his disappearance and discovery.

Leake even doubts the MacPhersons initially, wondering if they have difficulties coming to terms with their son dying young. But as he digs deeper, it becomes clear that there are many curious elements around this incident, and “a few suspicious-looking things may be a fluke, but a clear and consistent pattern of suspicious conduct and circumstances cannot arise from chance occurrence.”

The cover-up that emerges becomes increasingly insidious, and if there wasn’t so much documentation speaking to a different story, and so many anomalies in nearly every facet of the investigation, it would seem the stuff of conspiracy theory. But both investigational basics and standard procedures were inexplicably deviated from, each step of the way, and this in a country that’s in love with paperwork, rules, and doing everything the official way.

Critical facts that would have taken an inspector just a few minutes to obtain and record were simply omitted. None of the witnesses had been examined with a probing interview. Whatever stories they told, no matter how unnatural-sounding and full of holes, were noted without question. I’d never seen such a systematic lack of curiosity.

Leake describes what was particularly difficult about working on this story and different from his experience researching and writing The Vienna Woods Killer: the Austrian authorities wanted to solve those murders. Whereas here, they clearly wanted something to remain in the dark, consistently obstructing efforts to obtain what should have been very simple answers – the proverbial “all the way to the top”.

He compares the shoddy efforts around Duncan to the dedicated forensics employed for Ötzi, the ancient ice mummy found in the Alps. If authorities were willing and able to so thoroughly investigate a 4,000 year old body, it seemed highly suspicious that they couldn’t, or wouldn’t, investigate a modern case more deeply.

As Leake summarizes one especially odd detail: “Not even after Duncan’s body was found fourteen years later were they given an honest account of how he had died. No authority supervised the recovery of his corpse, and even though it lay for an entire week in one of the world’s most advanced institutes of forensic medicine, his parents weren’t told the cause of his death.”

Yet finding answers wasn’t impossible. Thanks in part to Lynda’s dossier spanning the 20+ years since Duncan disappeared, Leake had a wealth of materials to begin his research and identify oddities. He also pays careful attention to the psychology contributing to this story, a fascinating and well-explored element. A Texas native, when describing the cover-up and determining why it happened in this small Tyrolean village, he fairly observes: “I could well imagine the difficulties an Austrian couple would face if their son disappeared under mysterious circumstances from the commercial premises of a powerful man in rural Texas.”

He also covers similar glacier incidents and the science around them, including another at the Stubai glacier, and ideas about the “Austrian mentality”, or whatever an outsider can determine of it. Leake notes the connection of this psychology to what happened at Stubai and its insular community, and how the thread was picked up and carried by so many figures among the Austrian authorities (with some very intriguing side stories of other mysterious or botched cases involving some of the same key players). These range from investigators who slacked on their responsibilities to a forensic examiner who played the part of a sympathetic specialist able to provide the MacPhersons with information and guide them through the circumstances of their son’s death, but actually obfuscated and obstructed even more.

What is the difference between covering up a crime and failing to detect it by neglecting to investigate every single lead? From beginning to end, a striking pattern of omission is evident in the way the authorities handled Duncan’s case, and it is the omissions that tell the tale.

As terrible as this story is, it’s also a testament to the MacPhersons and their never-flagging dedication to uncovering the truth for their son: “Treated with a long train of shabby behavior, they never yielded to the temptation of hate or cynicism. Tricked and manipulated, they remained honest. Encountering all that is lamentable about human nature, they responded with all that is best about it.” It’s heartbreaking but their perseverance and character are admirable.

And it should be a more widely known story, even if you’re bound to feel angry after learning about it. It would be unbelievable if there wasn’t so much evidence: through dedicated research and enlisting specialists, Leake determines a thorough, plausible conclusion of what happened and why. It’s a page-turning, utterly captivating mystery, the kind of story you find yourself mulling over constantly after reading, and a disquieting look at a potential crime and cover-up in a region far more insular and self-protective than outsiders may realize. 5/5

Bonus: here’s a brief intro to the book and story, narrated by the late, super-great Bill Paxton.

15 thoughts on “Mystery and Cover-Up: What Happened on an Austrian Ski Slope in 1989?”