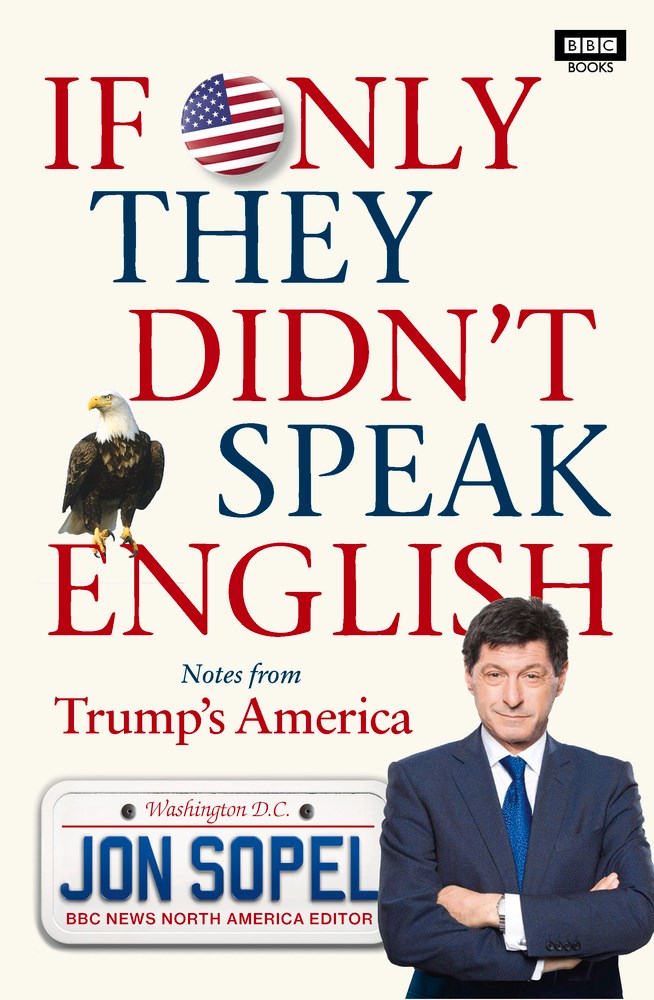 BBC journalist Jon Sopel, the network’s North America editor, writes about US history, politics, culture and personal impressions through a UK-US comparative lens while working in both Obama’s and Trump’s America.

Sopel got called out by Trump at a press conference in early 2017 while asking a question about the travel ban, with Trump snarking “here’s another beauty” about the BBC, adding, “I know who you are.” Sopel handled it smoothly despite Trump’s attempts to rattle him with the world’s least-threatening gangster impression.

All to say, Sopel’s something of a veteran of American political coverage, and he’s careful to maintain strict standards of integrity in journalism (irrelevant to Trump, I know, but it still means something to me.) In his book, he loosens his tie to allow in some personal opinion and anecdotal observations from living in a tony Washington D.C. neighborhood.

His “lightbulb moment” in realizing how divided Americans have become was a decidedly peculiar one, talking with a woman at a DC hair salon: “She told me she couldn’t decide how to vote because she liked Donald Trump and Hillary Clinton … You can like one and hate the other. You can dislike them both but one marginally less than the other. You can hate them both equally and decide you’re not going to vote… It was an opinion I just hadn’t heard expressed anywhere at any time during the 15 months of the campaign. It was astonishing, and just brought home to me how deep the fissures were.”

He moves through nine chapters categorically divided into anger, race, patriotism, government, God, guns, anxiety, [being] special, and truth. He compares and contrasts the US position and general and/or political culture around it with that in the UK and to a lesser extent, other countries. It’s an appealing premise, and at its foundation is the idea that because our countries share a language, we tend to think we have more in common than we actually do. Fundamentally, he argues, the differences are wider than the ocean separating us. To illustrate he draws on historical elements and statistics, with the latter in particular being enlightening even for American readers.

Some other things, like how certain media outlets are openly biased, were also explored insightfully: “What’s crucial to understand is that in America what you listen to and watch will confirm your prejudices, not challenge them.”

The chapter on God and religion was phenomenal. Without the cultural or historical baggage that often accompanies this topic in the US, he brilliantly calls attention to just how present religion is in much of American culture, including leaking into government. It’s well done and important. I’m not even sure if some Americans realize how pervasive religion can be in mainstream thinking, especially compared to other nations. It was a relief to hear this articulated as he does.

But overall, the commentary isn’t particularly in-depth. It is readable and easy to absorb, though. I think it’s especially useful for drawing later from the easily distilled points he makes, I’ve certainly stowed a few away for future arguments (namely from the “Guns” chapter). Hypocrisy is a frequent topic, and he highlights this meaningfully, driving home how silly it looks. Somewhat related is a discussion of the gap between the taxes we’re willing to pay and what we get, or don’t get, because of it: “You have the richest country in the world with an infrastructure that is now looking decidedly Third World.” This is an upsetting but unfortunate observation that I know is hard to hear, but it’s true.

I did feel that he criticized certain things for humor’s sake that didn’t warrant it. I don’t want to be hypersensitive, but ignoring common sense and eschewing research isn’t what I expect from BBC journalism. Example: He rightfully points out how odd it is that US drug companies advertise their products aggressively on TV, with caveats including a laundry list of scary-sounding potential symptoms and an “Ask your doctor” warning. Good point well made.

But connected to this, describing a trend of rising anxiety that’s seemingly due to flame-fanning media reportage (like of the 2014 Ebola outbreak), he comments: “It seems Americans have also become increasingly fearful of mornings. Searches for ‘anxiety in the morning’ have risen threefold over the past decade.”

I’m glad that he’s never experienced crippling anxiety upon waking that makes the rest of the day seem unfaceable and I hope he never does, but making an insensitive joke about it doesn’t prove an otherwise salient point.

He also mentions how little Americans drink at dinner parties he’s attended, ending by recounting a hostess asking if he was ok to drive after he’d had so little. I believe he answered his own question about why responsible people don’t over-imbibe when having to drive home is a necessity. No one I knew who was taking the NYC subway or a cab home worried how much they drank. So should I infer that New Yorkers recklessly overindulge and the rest of the country are near-teetotallers? It’s conjecture, and a weak example to pick as a cultural difference, I thought.

But worse, he erroneously (in my opinion) links it to prohibition-era ideas about the immorality of alcohol, following immediately with: “All this in a country where religion is meant to have no role in the life of the republic.” I like his deconstruction of the hypocrisy inherent in many of our policies and ideas, but that’s not one of them. Not to say there aren’t those who abstain for moral or religious reasons, but not driving after drinking is unrelated. And actually, it IS a huge, ugly issue, so if anything, maybe appreciate that your fancy DC dinner party friends aren’t doing or encouraging it?

Rant-segue aside, my point is that despite a wealth of research assembled in some sections, elsewhere he allows the anecdotal and opinion to speak where they shouldn’t.

I wasn’t necessarily the right audience, it’s clearly intended for British readership. But I love political commentary, and the BBC is high on my list of preferred news outlets, plus having lived abroad myself, I appreciate what a non-native perspective can offer. When he addresses topics like American exceptionalism, an idea often viewed with horror outside the US and seen as totally normal within it, I understand why his recitation of history and light commentary is helpful in understanding something about national ideas and thus, about our place on the world stage. Sometimes it’s even funny (“The idea of American exceptionalism in the corporate-speak of today would be viewed as akin to a national ‘mission statement’.”)

But, as a news junkie (aren’t we all these days?) there was little new. Portions felt like history lessons, both older and contemporary, repeated Wikipedia-like without fresh insight. I think it’s helpful for those who may read headliner stories and have questions about precedent or context, or are seeking a background in US history to understand current issues, such as why we have the right to bear arms in the first place.

But for those following US news regularly, there’s not much to glean additionally from the reportage. Recommended for some well-distilled and logical arguments (take the personal stories with a grain of salt) and non-US dwellers looking for historical background to current events. 3/5

If Only They Didn’t Speak English:
Notes from Trump’s America
by Jon Sopel
published September 7, 2017

26 thoughts on “Divided By a Common Language, More So Than We Think”