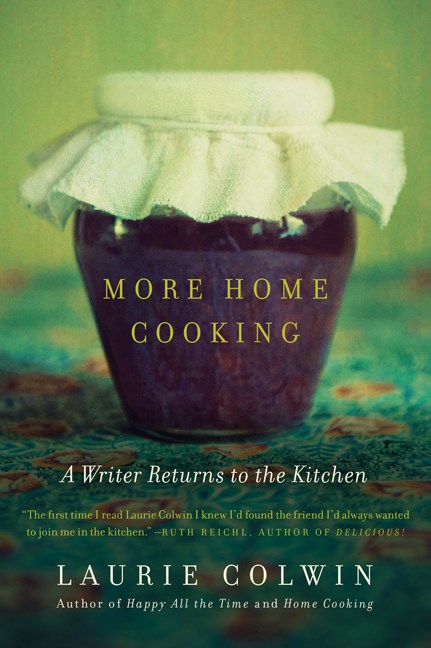 The dark, gloomy days of January were not only just such a joy-necessitating time, but turned out to be ideal for this book for another reason. Laurie Colwin, novelist and passionate if easygoing cook, lightly structures this kitchen memoir around the seasons, interspersed with other themes and memoir miscellany. The idea of moving through the year and food for various holidays forms the backbone. She begins in January, in the post-holiday bluesy-kinda-feeling period, and works her way somewhat loosely through the year, creating the best sandwiches of her life during a Minorca summertime and conquering jam-making, among other culinary highlights lovingly related.

In her chatty, signature style, Colwin tells sweet, funny life stories of family, friends, and feeding and entertaining them alongside her cooking ideas and preferences. It has that sought-after feeling of sitting together at her kitchen table as she imparts some precious wisdom about what she loves to cook and little ways to make dishes unique, why certain condiments or ingredients aren’t so popular and should be, and her suggestions for how you might improve home-cooked meals with very little effort. It’s accessible and never intimidating: you won’t feel like anything is too complex or out of reach based on your own kitchen skill set.

And what she does so marvelously is make you feel better about what you’d thought were shortcomings. She recommends dishes that she promises can’t fail, and I’ve found that to be (mostly) true. She favors foolproof recipes (“idiot-proof” being one of her favorite terms), and structures many of hers loosely – it’s not a cookbook, despite recipes dotted throughout.

Her ideas not only allow you to add and subtract ingredients or parts of the process as you like, but almost subconsciously boost your confidence – if she’s so relaxed and nonchalant about it all, there’s no way I can mess it up. Colwin’s focus is always on enjoying the time with your loved ones – or just yourself – and making good food that people love to eat without stressing yourself or falling into a frustrating time-suck.

Something I love about her cooking style is how she incorporates ingredients that aren’t always typical staples, or many people’s preferred go-tos. She shows how they can be customized, prepared simply and for the most part healthily.

Some lesser-loved ingredients highlighted this volume around are beets, lentils, Indian hot lime pickle (with which I’m also obsessed), brussels sprouts, celery salt, chutney, and, her standby from the first volume and life in general, black beans. She gives easy but thoughtful ideas for preparing them, always with her optimistic attitude, weaving them into stories of happy dinner parties and picnics past.

It’s a reassuring book especially for less-confident or creative cooks (nothing negative intended – that’s totally me), or even those who want to cook more, but shy away from the time commitment involved – those of us who need “ease of preparation,” as she says. Everything is colored with her sense of humor – at once self-deprecating but assured and able to find the joy in absolutely everything. I definitely needed her subtle nudges towards appreciation of the everyday little things, and highly recommend it for others who need such gentle reminders too.

One chapter, “How to Cook Like an American”, is one of the best explanations of the complexities of trying to pin down or label American cuisine I’ve ever encountered. Making dinner for an Indian friend who tells her he wants to cook American-style, she realized just how complex and nuanced that actually is: “There is nothing like a visitor from another continent to confuse you about your homeland.” Musing over it, she reasons that fried chicken was originally Chinese, apple pie has English origins…what’s really and truly ours?

This is a concept I’ve found myself up against repeatedly, even heatedly. Those who haven’t lived in the US will often insist that the country has no cuisine of its own (besides fast food, that is). This is patently ridiculous, but you do need some kind of defense handy. You can try to explain the melting-pot concept but it’s not effective or tangible enough, as the long-time absorption of different cultures and nationalities we have in the States doesn’t seem to translate quite the same elsewhere.

Colwin eventually arrives at an explanation that satisfies her, and it’s true to her inclusive, wide-ranging but ultimately simple style:

In anthropology courses we learn that a culture consists not merely of great artifacts and rituals but also of the ordinary things ordinary people use and do. With this thought in mind I defined American food for myself: American food is what Americans eat.

Her storytelling is all-around delightful, but also delightfully ahead of her time. She has a chatty, warmly personal tone that almost borders on the blog-like. She’s sly, too – I squealed when I read this: “If I had a dollar for every time someone said to me, ‘I don’t have time to bake bread anymore,’ I would be as rich as Donald Trump used to be.” How I wish she was still here!

The recipes are delightful, and manageable as I’ve found her previous ones. My favorite by far: Noting that she’s “never yet encountered tomatoes in any form unloved by me,” she offers a double-biscuit crust tomato pie recipe that I’ve made countless times already (it’s also in Ann Hood’s Kitchen Yarns). She’s right – it’s perfect with iced tea on a hot summer day, but just as wonderful sitting in your kitchen on a cold winter day with a cup of coffee. The same could be said for the book – just perfect.

18 thoughts on “Warm, Funny Kitchen Stories from the Heart”