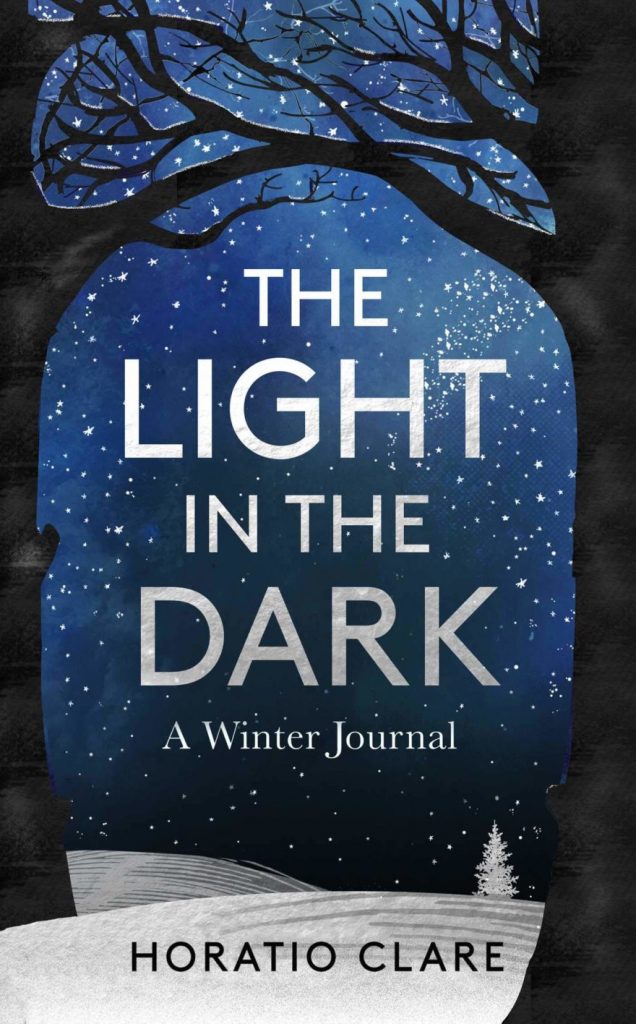 Book review: The Light in the Dark, by Horatio Clare (Amazon / Book Depository)

The struggle is intensifying. It is like being sealed into a grey snowball which keeps gathering defeats. However much I wash, I seem to smell of dirty winter trains and exhaust… Winter is a miser at the moment, giving nothing but bills. The result is inarticulacy… The words and the lightness will not come… I write everything down first, and work through it carefully and slowly, so that I will not be left gulping in silence.

British author and lecturer Horatio Clare suffers from seasonal affective disorder. SAD, as it’s abbreviated, sets in alongside winter’s dark days and is a not uncommon form of depression: the American Academy of Family Physicians reports that 4-6% of people suffer from it, and another 10-20% may to a mild degree. Its symptoms include many all too familiar to those of us in wintery climates – fatigue, (over)eating for comfort, oversleeping, lack of interest in very much.

But the emotional effects of those symptoms are more sinister. Especially in locales where natural light isn’t abundant, a unique kind of gloom and various accompanying ideas of doom take hold and it’s hard to shake them. One problem or dark thought compounds and brings another, and it doesn’t take long before a person feels life spiraling into a psychologically unsound place, with aspects of home, family, and work all horribly affected.

It was nothing inexplicable: depression brings fear, entrapment, fault and failure wherever you look.

Living in Hebden Bridge in West Yorkshire, England, Clare faces the dreary specter of a bleak British winter every year. He notes that part of the problem is losing sight of small things that bring happiness, solace, even joy regardless of the season. Things like his family, or appreciating nature – as a seasoned travel and nature writer, this seems a particularly tough point for him. He observes wistfully (but beautifully) things like, “Beware that glaze which creeps over the inner eye, blinding you to the brightness of moss in rain.”

But in 2017 he approached winter’s onset differently, deciding to keep a journal chronicling the course and content of the winter days and observing his feelings and impressions. Not a bad idea – a little introspection can sometimes work wonders, and just keeping your pen moving with purpose is meaningful.

It is not fair to blame the winter, but it does set the stage so well, with its clamped-down rains, its settled and introverted darkness, its mean ration of light, its repetitions.

The result of this exercise is an impressionistic, heartfelt, and at times aching glimpse of everyday life in the shadow of depression, at least for part of the year. He chronicles minutiae – his children’s comings and goings, descriptions of work and trying to explain how things feel different during this time, family interactions, the faults in the house that become pronounced in wintertime. And bigger emotional troubles, like the guilt he feels for burdening his wife with his emotional upset and additional responsibilities during this time.

But, interestingly, he doesn’t penetrate too deeply or revealingly in his exploration of these emotions and accompanying psychological turmoil. Whether this was too private or too painful, I’m not sure. It can seem a drawback, but by the end I appreciated his approach, which focuses more on the impressionistic. His writing shines this way, and I could see how the book took shape from loose journaling. And it still hits quite heavily even with the glossy literary veneer he applies to avoid plumbing the depths of depression.

The negative, like an egg hatching, produces a kind of dark thing which sits in my mouth, spitting out gloom whenever it can. I try not to speak.

Clare’s prose can be incandescent. For writing set almost entirely in the shortened, cold and oppressive days of winter, it brims with warmth and underlying promise, perhaps even when he doesn’t think so. I found it immensely comforting, both in accompanying him on his “journey” through a troublesome time and the inherent sense of understanding and unity that brings, and because his writing takes unexpected directions and was often pure delight to read. His prose is lyrical, intelligent, and incorporates observational nature writing that’s brilliantly perceptive and realistic.

Not to mention his handling of simple truths and realities that nevertheless become hazy and slippery to grasp when mental illness has a hold: “Depression, seasonal and otherwise, turns all this upside down: the past is a guilty place, the future a hanging threat, the present a humiliation.”

If you look on the dimmer side of anything you are lost. When Uncle Chris turned the car over, his mother transformed the event into a triumph of luck.
‘Nobody was hurt,’ Jenny said, ‘that’s what I’m telling myself, and thank goodness.’
I hope I am becoming better at thanking goodness.

As inspiring and, maybe strangely, comforting as I found most of the book, I wish a final scene had been mostly omitted. Clare visits a psychiatric nurse who assures him he’s not bipolar, which was a lingering fear throughout his journaling. She recommends a vitamin regimen. On the way home, elated, Clare calls his wife to tell her, “I’m not mad!” I understand his relief at not being diagnosed with serious mental illness, but it was framed insensitively for those who are, or who love someone who has received such a diagnosis.

I try not to fault something like this because not every story can be every thing for every person – that’s impractical and leads to everyone being afraid to express opinions and tell their experience. But this could’ve been handled more sensitively. It seemed to painfully underscore what a tough diagnosis bipolar disorder is.

Plus, I’m wary of anything emphasizing vitamins and dietary supplements over medical treatment/therapy because people take that information the wrong way. Maybe I’m reading into it too much, but so I felt. It seemed like potentially undoing a lot of good that he’d done with this book otherwise. (And you know who else recommends vitamins instead of treating mental illness? Scientologists. If you ever find yourself in agreement with Scientology doctrine, perhaps reconsider.)

Beyond the windows the light holds promises, hints of hope. The silver birches sing light back to the sun.

Aside from this last-minute quibble, it’s a lovely book. It’s personal but not intensely so – I think that might’ve had the potential to be painful for readers and upsetting for the author. Instead it shows the slow, steady progression of days that are mentally trying, sometimes with setbacks, but always focused on both the inward and outward journey through it. It seems to softly remind at every opportunity that lighter, brighter days are coming. Literally and figuratively.

“The Russian proverb goes, ‘Life is not a walk across an open field,’ I said. “But it is sometimes.”
My mother, hugely smiling, repeated, “It is sometimes!”

The Light in the Dark: A Winter Journal
by Horatio Clare
published 2018 by Elliott and Thompson Limited

33 thoughts on “A Mind of Winter: Chronicling Seasonal Darkness”