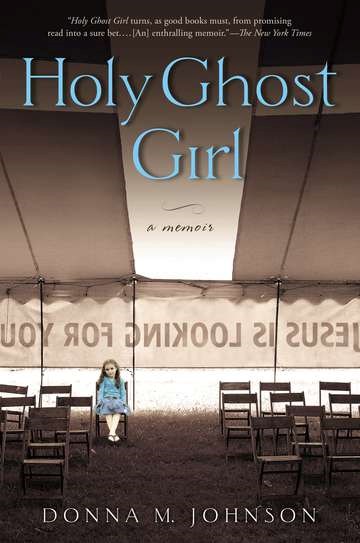 [The tent] gathered and sheltered us from a world that told us we were too poor, too white trash, too black, too uneducated, too much of everything that didn’t matter and not enough of anything that did. Society, or at least the respectable chunk of it, saw the tent and those of us who traveled with it as a freak show, a rolling asylum that hit town and stirred the local Holy Rollers, along with a few Baptists, Methodists, and even a Presbyterian or two, into a frenzy.

Donna Johnson is the stepdaughter of “Brother” David Terrell, a traveling Pentecostal tent revivalist preacher (colloquially, a Holy Roller). When Johnson was three, her mother joined up with Terrell’s tent circuit ministry as an organist, later becoming one of his unofficial partners, bearing him children despite his remaining married to his first wife.

They go on the road, living a carny-like lifestyle throughout the 1960s and ’70s, traveling the country setting up revival tents where Brother Terrell preaches to growing crowds. His evangelism took off after he seemingly performed a faith healing, curing a woman of a tumor. After that, his reputation grew, as did the group’s coffers, with his faith healings packing the tents with believers hoping for miracles. It goes without saying that this was bunk.

The cosmic implications of our hardships and the fact that we expected Jesus to touch down at any moment made the normal touchstones of childhood an afterthought.

This story starts off strong – beginning with possibly the most captivating opening lines I can imagine, relating a phone message Johnson received about her stepbrother’s funeral:

Donna, I don’t know if you’re coming to the funeral, but I heard Daddy’s gonna try to raise Randall from the dead. Call me.

The first chapters are captivating. Johnson writes compellingly, weaving so many details into the world she depicts. I admit I was somewhat skeptical when I realized much of what she was describing in such rich detail happened when she was about three – that gave me pause. She does address one incident that she says she remembers as if she was there even though she wasn’t, thanks to it being retold so many times by many people, and that’s fair enough. I’m still on the fence about how she remembered so much otherwise.

But the childlike perspective is effective overall, as it allows readers to see both the magic that’s onstage and the darkness that was waiting in the wings. Terrell collected money during his services (“love offerings”) and bought a mansion in Texas, complete with pool and cars, while preaching to poor people emptying their pockets in the hopes that his miraculous healing might cure them against medical odds. So many people were transported on stretchers from area hospitals that fire marshals warned against overcrowding the tents.

A drawback is that as she explains through a child’s eyes, Johnson doesn’t provide rationale or explanation for why those things were as they were. She left the preacher’s family early, at age 17, so maybe didn’t know all the ins and outs. For example, Terrell appears functionally illiterate, but somehow managed to read the Bible without issue during his preaching. I’m guessing he’d memorized what he’d heard and had others read to him, but there are several such little mysteries left unaddressed. It’s hard to notice them in the course of compelling, immersive storytelling, but they become curious sticking points after reading.

Johnson and her little brother, Gary, were passed off by her mother to random revival attendees or acquaintances, who “care” for them while she accompanies Terrell on mission trips, among other mysterious jaunts. What follows is terrible abuse from a deeply troubled woman. It’s unsettling and bewildering, and not easy to read. Johnson relates it calmly and collectedly, and it’s something of a relief to feel that the adult writing this story is at peace with the tumultuous, unstable childhood she survived.

Around this time, Gary survives a car accident while unsupervised, crediting the Jesus photo in his back pocket, while the author, a child herself, grapples with guilt over not minding him better. Never mind her mother, who was distracted with Terrell. She muses that Jesus might have better gone about his business elsewhere if only she had taken better care of her brother. The mind reels over what this woman had to deal with in her young life.

Despite having left the ministry, Johnson saw Terrell perform an inexplicable healing with the laying of hands in her early adulthood and makes her way back to the “Terrellites,” briefly becoming a believer again. This section was problematic as it skipped in leaps and bounds over years of her life in a few sentences, and as miraculous as that healing seemed, the description of it and her return, only to leave again and wrap up the book with that funeral referenced in the prologue, felt rushed and incomplete, especially considering the rich detail of earlier sections.

There’s an obvious grappling between doubt and faith throughout, and that’s certainly messy in real life but the threads are sometimes difficult to follow here, despite some often lovely and reflective writing.

Brother Terrell often said from the platform that growing up he had always had a sense that he was different. No doubt the leg surgeries and hospital stays that were a part of his illness set him apart from other kids. The visit from Jesus at age nine must have sealed the deal.

Despite this kind of witty, clever humor that makes reading this a delight, conspicuously absent is what exactly was going on with Terrell. Again, this may be because the author herself isn’t sure what to make of him. He remained the father figure that she knew, whatever his faults, which include hypocrisy, delusions, adultery, and tax evasion.

It’s a story I’m glad to know, having not been familiar with Terrell and his followers, although learning what the children went through and the responsibility shirked by their mother is upsetting.

As I might’ve mentioned, I love a memoir of escaping anything that smacks of the culty or fringey-religious, and I also loves tales from evangelicalism (this feels like a weird interest to have, but so many of these books are published that I guess it can’t be that weird). This is recommendable for those interested in the same, but more as a dreamy-but-disturbing recollection of unconventional childhood scenes and less a thorough examination of what happened and why. 3.5/5

11 thoughts on “Childhood Scenes from the Tent Revival Circuit”