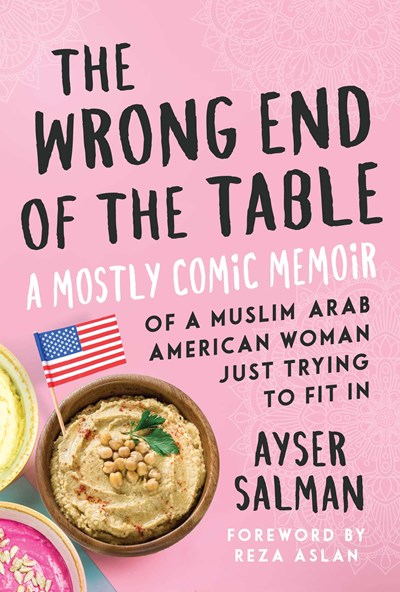 If you’ve ever felt like you’ve been at the wrong end of the table – whether you were born in an Iraqi dictatorship or hail from Lexington, Kentucky – this is for you. Though I can’t speak for all of us, I can at least tell you my story.

Ayser Salman, a writer/producer/editor for major Hollywood film studios, was born in Iraq and, fleeing Saddam Hussein’s dictatorship, emigrated to the US with her family as a child. Later they returned briefly to the Middle East, to Saudi Arabia, before settling permanently in the US. This gave Salman quite the varied upbringing, with a not-insignificant amount of culture shock on both continents, but she faced her challenges with admirable aplomb (even if she plays down her strengths and achievements a bit) and a boundless well of humor.

Salman uses her unique background – although, as she seems to underscore, not that unique as there are so many people living similar experiences to hers – to tell stories of being awkward, unsure, or out of place but eventually finding your way. She has so many touchpoints that make for interesting, surely relatable and often charming stories, ranging from the religious and cultural to the personal.

In vignette-like chapters, she visits familiar sources for autobiographical material, including her quirky family, a self-deprecating but sweet awkwardness as a child, and dating dramas in America, with embellished comedic effect. It has its humorous moments, my favorite when describing her dad reading pharmacokinetics textbooks at the beach where she worked: “Kinda hard to be a cool and authoritative lifeguard when your Iraqi dad is sitting ten feet away, telling you that your crimping iron has been recalled for being a fire hazard.”

Or this, in a story about an increasingly complicated ruse she told her parents to get out of the house and hang out with a boy: “I wrote a note saying I had to return overdue library books and left cursing my lot in life that had forced me down this rabbit hole of lies.”

I loved one section detailing Arabic proverbs her father told her and matching them to their English-language counterparts. It highlighted so beautifully the gap she’s bridging between cultures, showing that at the root, differences aren’t so big. Even across languages and cultural experiences, we still have the same messages buried in our proverbs.

“A fire in the heart, but no tear in the eye.” Keep a stiff upper lip.
I started to come around. Maybe there was something to Arabic proverbs, after all. They always paint nice images, and sometimes having a strong visual is better than brevity. Take what is now my favorite saying: “We mentioned the cat; it came bounding.”
Speak of the devil.

The format mostly revolves around recollecting an incident, spanning childhood to present, followed by a brief reflective lesson of what she learned or drew from the experience. But each chapter is so short, with each incident sketched out in highly specific detail but still somehow feeling surface-level, that the mini life lesson following it feels too light or cliche to be meaningful, and in some instances, it’s unearned. She also contradicts herself at times, making the overall effect somewhat slapdash.

What does come across effectively in these reflections is that despite her insecurities (not helped by American misconceptions of Iraq and Iraqis, not to mention what it must’ve felt like growing up Arab in Lexington, Kentucky) she demonstrates a quiet but clear self-confidence as she looks back on it all. Her path wasn’t without challenges but she seems to celebrate all that it instilled in her, and that’s a wonderful, worthwhile message to share.

The writing is chatty and not especially strong, but I think it will be appreciated by readers who like a celebrity memoir vibe. It’s a light, exaggeratedly humorous tone that reminded me of Ellen DeGeneres’s books, and like those, I expected more from it in terms of being funny. I imagine enjoyment of it will depend on whether your sense of humor aligns. It employs an army of footnotes to create many of its jokes, going overboard since chapters are already quite short, sometimes with seemingly more content in footnotes than chapter itself. These also get a bit meta, addressing the writing of the book, the publisher, what her mom thinks about including something, etc. Extreme footnoting is a style I don’t prefer, but I mention because others do.

On parental commandments: “Thou shalt not wait tables in any restaurant with a bar lest drunken males make passes – This one I was fine with – I’m clumsy and tend to drop dishes.”

On her dad having to select a birthdate for US documents: “Going off what he knew, Dad chose April 20…Once it became official, he realized it was also Hitler’s birthday, but it was too late to back out. In his optimism, he figured he would own it.”

My preferences aside, Salman says that what she wanted in writing the book was to show others who have felt similarly that they’re not alone – that is, those who have felt somehow out of place; immigrants caught between the old traditions of their homelands and new ones of adopted homes; struggling to become one’s own person and find a place in life despite cultural, linguistic, and familial hurdles; etc. I think in that she succeeds, and I hope this finds its way to those who need it. 2/5

It had all worked out in the end, and it was my first experience in being authentic. It was the first time I’d trusted my instincts and was rewarded for it. I had found my voice and used it to great effect.

The Wrong End of the Table:
A Mostly Comic Memoir of a Muslim Arab American Woman Just Trying to Fit In
by Ayser Salman
published March 5, 2019 by Skyhorse

13 thoughts on “Light Recollections of Growing Up Arab in America”