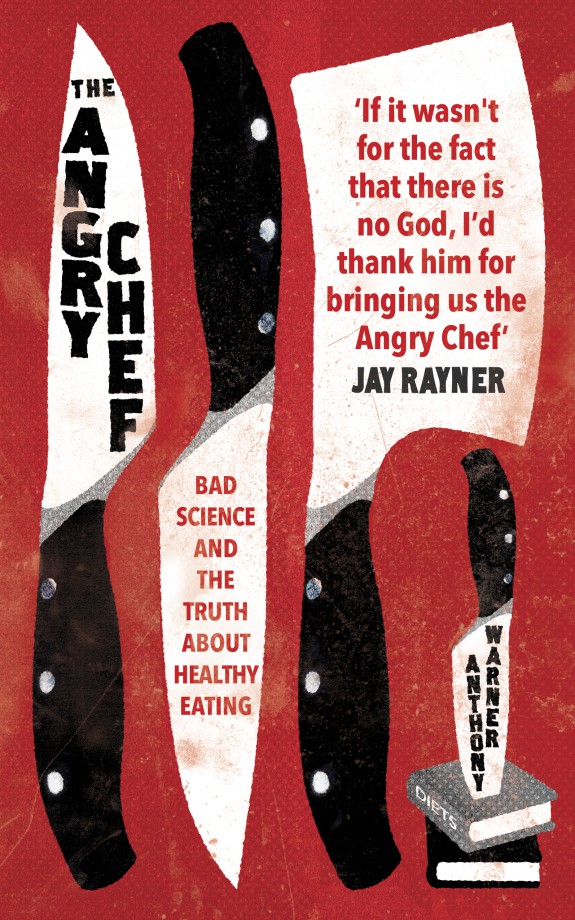 I am a chef with a passion for cooking, a background in biological science and a fascination with the way our diet affects our health.

I have been down the rabbit hole, transported into a world of strange pseudoscience, arbitrary rejection of modernity and dangerous dumbfuckery that has come to dominate the discussion on food and health.

The Angry Chef blog was started by Anthony Warner, a British chef working in the food manufacturing industry. Warner was fed up with the wellness movement and never-ending health trends and diet fads that all have, at their core, potentially dangerous restrictions backed by dubious science promising questionable medical benefits.

With a background in biochemistry and help from scientific and dietary nutrition experts, Warner set out to debunk these claims, which are at best misleading and unhelpful, and at worst, dangerous. He employs a colorful vocabulary and a wealth of meticulously explained, readable science, making an educational, hilarious exposé of popular food myths. He’s assisted by an anonymous collaborator, a research scientist in dietetics and biological sciences, who concludes: “the more you learn about diet the less interesting the final message is. Eat everything in moderation and move around more.”

That’s the core message here, and it’s a simple one. Almost too simple, but this is a rigorous, scientifically underscored book-length treatise in support of it and against a tendency of the instinctive brain towards big, generalized ideas that sound sensible but aren’t.

To cook from raw ingredients may be simple and effortless for a chef or food obsessive, but for many it is stressful, joyless and difficult.

It’s worth addressing Warner’s job in the food manufacturing industry. This isn’t a commercial for convenience food, but he makes a case for the role of prepared foods or ingredients in busy modern lives, including that they’ve freed up women to work outside the home and pursue other endeavors. I know not everyone will like this, but being such a woman who’s happy to have a frozen pizza or bag salad mix when overworked (sometimes just when lazy), I’m wholeheartedly on board.

He makes a strong argument for utilizing the benefits this industry can provide and allowing public health bodies to engage with it rather than reject it entirely for fear of being vilified.

If it doesn’t work for you, fine, but it shouldn’t deter from the important messages he conveys. The most important of which, and the closest it comes to providing any food philosophy, something Warner clearly wants to avoid doing, is to advocate for eating variedly.

The book also relieves guilt around food choices, and alleviates some of the burden associated with “clean” eating, cooking from scratch, and juggling the time commitment for cooking “healthy” in hectic everyday life. It’s so valuable for that. Shame and guilt are so intertwined with diet that they’re not even painted negatively: “guilt-free” options are ubiquitous in marketing, cookbooks, supermarkets. Warner is clear: “Try not to feel guilty. Most importantly, never make anyone else feel guilt or shame about the food they eat.”

Where has this book been all my life? Eating disorders and their connection to restriction and guilt/shame associations are also handled admirably.

In addition to the flawed thinking behind “clean” eating, he addresses the “cult” of gluten free (NOT people with celiac disease), the misunderstood evolutionary science behind paleo, dangerous claims of the “GAPS” diet, the utter ridiculosity of the alkaline ash diet, the myth of superfoods and toxins/detoxes, and many inaccurate claims by his nemesis, Gwyneth Paltrow, and her reprehensible GOOP. Even Chinese medicine is covered, with an interesting look at culture, wealth, status and their historical influence on health and diet.

His work debunking the alleged dangers of nefarious but unnamable toxins, including that the body is bombarded with them in our filthy modern era, was a fantastic chapter. Warner breaks down this oversimplification of “natural = good and unnatural = bad” with hard-to-argue examples: “Botulism toxin is an entirely natural substance … yet one of the most poisonous that we know of.”

People have always believed in the purity of times past and the contamination of modernity… As each of us age, we have the tendency to mistake our own decline with that of the world, to believe that there is something good and pure about the past that we have lost, when what we really mourn is the loss of our own youthful vitality.

He tracks the arguments made by health gurus to their sources and examines the research or claims their theories stem from. Often, cited laboratory research doesn’t translate to identical effects in the human body. Or they cherry-pick elements of studies and apply them without considering that correlation doesn’t imply causation, the all-important concept Warner stresses repeatedly as “without doubt the most important thing that science can teach us.”

Or, quite simply as in the case of toxins/detoxing, there wasn’t a problem in the first place.

That is not to say [Maine blueberries, ginger, kale, walnuts, garlic, green tea and numerous other substances named as detoxifying] are not good for you, just that they cannot unpoison you, especially when you haven’t been poisoned.

After examining coconut oil, “the most bizarre of the miracle superfoods”, a chapter on sugar begins: “If the world of action movies has taught us anything, it is that when something is imbued with magical superpowers, it needs to have an equally powerful archenemy. Although there are a few candidates for a potential nemesis to our brave superfood heroes, these days the Lex Luthor of bullshit nutrition is our old friend sugar.”

His sense of humor makes reading this more fun, but it also helps make the science accessible. I worry somewhat about oversimplification, but he does take care to cover the concepts of moderation and paying better attention to what we eat and how much. And if working out nutrition for yourself hasn’t been successful, he explains the importance of dietitians trained in dietary science who can assist, so why do we turn to Instagram wellness gurus instead?

No food should be feared, no choices deemed ‘wrong’. We should be free to embrace the huge variety that the world of food has to offer us, not restricted in our choice based on the moral values and pretensions of others.

Warner also “picks on” Michael Pollan, but with the caveat that he admires his work and wants him to do better from a scientific perspective. He identifies why some of Pollan’s ideas, like not eating anything our great-grandmothers wouldn’t recognize as food, are problematic:

If we dropped in on our great-grandmothers at a typical meal time we would find people scraping an existence with nutritionally poor, unbalanced meals and food scares that make horsemeat contamination look like a pyjama party.

And why do we insist on ignoring experts and discounting science? We don’t do that elsewhere.

We need experts. We need them to drill our teeth, to fix our laptops, to build bridges and perform surgery. We should not pick and choose when we engage with science. We should not decide that in some areas we have the expertise because of some instinctive sense of what is right. Just because the outputs of nutritional science can seem less tangible than those of engineers, surgeons or computer programmers does not mean that they are any less significant.

Warner writes that “It has been said that the energy required to refute bullshit is many times the energy required to produce it; I only have so much time, and this book can only have so many words,” and I feel similarly trying to review it. There’s so much I’m not even mentioning. I think The Angry Chef could frustrate those who have anecdotal evidence of diets working and might ascribe his opinions to an underlying agenda, but I would encourage anyone considering the trends covered to read it with an open mind.

Despite his swearing and annoyances, the foundation here isn’t opinion. We have to stop pretending science is deceiving us because it’s not providing the easy, sweeping solutions we’d prefer. And to be clear – it doesn’t discount legitimate medical reasons for avoiding certain foods or eating specific diets.

Pseudoscientific beliefs are mostly born out of misunderstandings of science, based on grains of truth that are over-extrapolated many times to become vast monsters of unstoppable woo.

Funny, smart, readable science on the dangers of trusting inexpert claims and the solid information necessary to counter unstoppable woo. Must-read for anyone navigating the plethora of health and nutritional claims and confusing studies we’re bombarded with.

The Angry Chef:
Bad Science and the Truth About Healthy Eating
by Anthony Warner
published 2017